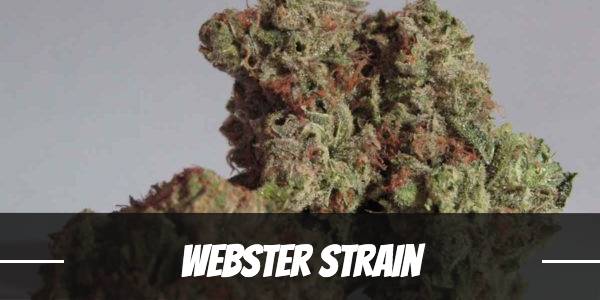 Webster is a Sativa-leaning strain with delicious citric flavors with hash undertones. Upon consumption, it induces an exhilarating high that delights the senses, raises motivation, and keeps users feeling upbeat. It also encourages users to move around or perform light physical activity. As such, it is highly sought-after among recreational enthusiasts in spite of the mysteriousness of its lineage.

It also provides comfort to patients. Its uplifting buzz improves the mood, allowing long sufferers of depression, anxiety, and depression to take a break from the negativity and worry. Although its effects are mainly associated with the mind, it has potent bodily effects that appease different types of aches and pains.

Growers can also benefit from Webster. It is low maintenance but high yielding. The buds it produces are not only fluffy with a dense core, but also covered in a copious amount of trichomes.

Webster starts with a bang – delivering an energizing high that wakes users from lethargy. This daytime strain is best used for starting the day, in place of coffee. It not only motivates, but also sharpens the senses and improves the mood as it clears the mind.

Preparing for some food is highly recommended. After all, the stimulating head high eventually leads to a ravenous appetite. Moreover, it replenishes the energy lost throughout the day.

The intensity of its effects eventually grows milder as each hour passes. Still, the initial vigor is enough to last throughout the day. It gives users enough zest to complete tasks albeit at a slower, more relaxed pace.

Users should be wary about overconsuming the strain though. It is a potent strain that could easily green enthusiasts out. Using it in moderation will guarantee a pleasant experience.

Webster has a sweet citric aroma. At times, it could get really dank with its musky hash and peppery undertones. Breaking the buds apart reveals its floral undertones.

In the palate, Webster’s citrus overtones shine through. It is sweet with floral undertones that accentuate its dankness. On the exhale, its musky smoke leaves a Hash aftertaste with spicy notes of pepper which could cause some coughing.

The presence of moisture-inhibiting cannabinoids in Webster leads to the typical dry eyes and cottonmouth. It is often mild and ignored by seasoned users, but beginners may down a few glasses of water to hydrate. Depending on the dosage, the Sativa-leaning strain could lead to anxiety and paranoia.

Webster is a high THC strain with immense therapeutic capabilities. For one, it induces an uplifting head high that enhances the mood while stabilizing turbulent emotions. It is particularly comforting to patients dealing with the psychological distress that conditions such as depression, anxiety, and PTSD bring.

It could also be used to relieve mental or physical stress and fatigue. In improving one’s disposition, it clears away worries, calms the overwhelming dread, and invigorates the mind. Simultaneously, it gets rid of the heaviness that come with fatigue, exhaustion, or overwork.

The light stimulation wakes the appetite. However, before patients can go on munching some food, it first relieves any lingering aches in the stomach that could lead to vomiting and nausea. With its natural painkilling capabilities, it also eliminates various types of aches and pains all over the body. It reduces the appearance of redness while simultaneously appeasing swelling and sensitivity in the inflamed area. Apart from that, its anti-inflammatory properties also help relieve headaches and migraines.

Webster boasts both Indica and Sativa qualities. It is relatively and sturdy despite its lanky-looking structure. And though it prefers basking under the sun for hours, it has no problem flourishing in the cold and balmy weather of the northern hemisphere.

Growers may opt to cultivate the plant indoors too. Controllable environments offer easy adjustment to factors like temperature, lighting, and humidity. Moreover, growers can choose between mediums like soil or hydroponics.

It works best with both the Screen of Green and Sea of Green method. The former requires installing a screen right above the plant then weaving the branches into a net. This provides support so it does not droop low or break off. Pairing it off with a technique called Topping – removing the tops – creates multiple budding sites.

The latter, on the other hand, works best when at least four seeds in a single square meter then gently coaxing a single cola toward the light. Pruning is essential as the plants usually grow dense, inhibiting air in the lower nodes. Having a proficient ventilation system will also help with aeration.

The flowers become larger as the plant enters the blossoming period. The core is denser that the rest of the buds, giving it a structured but fluffy look. Enhancing are its dark, forest green hue and scattered browns from its pistils. The colors mix together under its cloudy, milky trichomes.

Webster has an indoor flowering period of 10 to 12 weeks. At the chop down, growers can expect between 12 to 16 ounces of buds per square meter.

A lover of the Mediterranean, Webster may sometimes encounter problems while growing in the northern hemisphere. Flowers usually bloom around the last few days of October to the middle of November. At harvest, it produces 16 ounces of buds per plant.

What is the Webster strain yield?

Webster yields 12 to 16 ounces per square meter indoors and 16 ounces or more per plant outdoors.

How much THC does Webster have?

What are the origins of the Webster strain?

The origins of the Webster strain are a mystery, and its lineage isn’t publicly known.

Have you ever smoked or grown your own Webster? Please let me know what you think about this marijuana strain in the comments below.