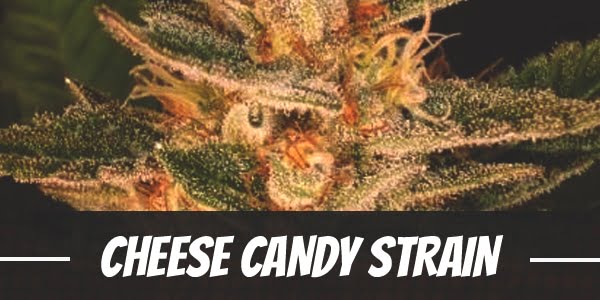 Cheese Candy is proof that something good can come out of even the most unlikely combinations.

This product by the Spanish breeder Delicious Seeds has distinguished itself for its exotic flavors and one-of-a-kind Sativa high.

And, having taken home numerous awards in Europe, it indeed has the credentials to back it up.

It is easy to determine what strains were used to create Cheese Candy. From its name alone, one can accurately guess that the famed Cheese played a part in its inception.

It comes as no surprise as the UK born strain’s unique fragrance and flavor has turned it into a fan favorite since the 1980s.

The other strain Delicious Seeds used is its very own Caramelo.

Typical of its Lavender lineage, the hybrid is abundant with various types of terpenes that produce a sweet but spicy floral scent.

These traits together with the Sativa genes were passed on to Cheese Candy.

Though mainly for recreational use, Cheese Candy’s appeal extends to medical users too.

Its therapeutic value, apart from THC, lies in its terpenes and other cannabinoids it contains that calm nerves and soothes muscles.

At up to 19% THC, Cheese Candy is definitely not a beginner’s strain. Packing quite the punch, it can easily overwhelm users who have just been introduced to marijuana and its THC levels.

In moderation, however, this strain is nothing but delightful.

Its effects begin with an energizing high that, although pronounced, is soothing.

The calm rush clears the mind and stimulates it. With keener senses, it becomes easy to focus on radiating happiness from within oneself.

Over time, a warm fuzzy feeling trickles down from the temples. Enveloping the body in relaxation is the strain’s Indica influence that goes hand in hand with the onset’s mental upliftment.

Cheese Candy does not cause users to end up with a debilitating couch lock. Because it can stimulate the appetite, it is best to have some food nearby for convenience.

Overall, Cheese Candy is a great wake-and-bake strain if used in moderation.

It is not uncommon for a strain’s fragrance to be given away by its name.

For example, Cheese Candy smells strongly of both cheese and caramel candy. Underneath the overpowering scents are subtle notes of fruit and lavender.

Cheese Candy can sometimes be very confusing to the palate. Its cheesy flavor brings about a buttery texture that is weirdly enhanced by the surprising taste of sweet berries.

Using the hybrid reveals a candy-like aftertaste of caramel balanced by a herbaceous lavender.

Cheese Candy has its fair share of adverse reactions such as dry mouths and eyes. Some people may also feel a little bit dizzy.

But, these are common and easily manageable. Though rare, users may want to watch out for the slight anxiety and paranoia that it may cause due to overindulging.

Cheese Candy was not developed for the medical community per se.

But, the combined effect of its psychoactive compounds, CBD, and cannabinoids, make it viable for symptom relief of certain mental afflictions like depression and PTSD. Its mentally stimulating high can alter the mind’s perception of life.

These same stimulating compounds also address the general lack of appetite among those who have undergone chemotherapy.

Thus, not only can it fill patients with hope, but it also allows for them to slowly get back on their feet.

A great mood enhancer, Cheese Candy induces positive feelings that serve to wipe out negativity as well as stress. By clearing the mind, it allows those with ADD or ADHD to focus.

Cheese Candy also has significant therapeutic value on the body.

Its soothing effects are great for taking away pains caused by involuntary muscle contractions such as cramps and spasms.

Those suffering from nausea caused by gastrointestinal problems will also find reprieve.

Delicious Seeds released Cheese Candy in the form of auto feminized seeds. That in itself has many benefits to the average cultivators.

Not only does it grow any time of the year, but it takes only between 6 to 7 weeks from germination to harvest.

It also virtually eliminates the chances of having male plants. At the same time, trimming or pruning it is less likely to turn a female into a hermaphrodite especially when stress training.

Apart from being a sturdy and resilient plant, Cheese Candy produces an abundant amount of flowers if cultivated indoors.

Although it can grow in the outdoors, its yield is significantly less.

For the home growers, caring for the plant is a little bit less tedious because of its resistance to mold and pests.

Cultivating Cheese Candy inside the house or greenhouse is the best way to let the plant reach its full potential.

Six weeks after germinating the seeds, it can provide a whopping 16 to 18 ounces of buds per square meter.

The conditions may be ideal such as having a warm climate, but typical of autos, its yield is not as excellent as indoors.

Cheese Candy, after some seven weeks, can produce only of 2 to 3 ounces per plant.

What is the Cheese Candy strain yield?

Cheese Candy yields 16 to 18 ounces per square meter indoors and 2 to 3 ounces per plant outdoors.

How much THC does Cheese Candy have?

What are the origins of the Cheese Candy strain?

Cheese Candy was created from a mix between Caramelo and UK Cheese autos.

Have you ever smoked or grown your own Cheese Candy? Please let me know what you think about this marijuana strain in the comments below.