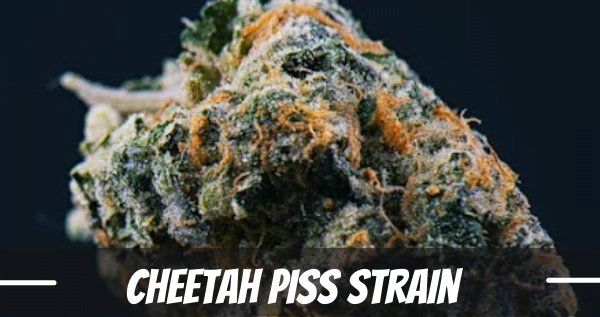 From comic books to music, movies to musicals, homages in art have always existed, so why should it be any different within the growing community?

After all, growing cannabis is an art form of its own.

Cheetah Piss strain is a pungent hat-tip to a popular Train-Wreck derivative strain from the early 2000s called Cat Piss; however, that’s where the similarities end.

The original creator of the Cheetah Piss strain is a bit of a mystery, though the strain is currently popularized by Cookies Genetics based in Los Angeles.

The original Cat Piss strain was a pure sativa strain.

As one would guess by its impressive genetics, the Cheetah Piss weed strain has a THC content no one can scoff at.

Averaging between 14% and 18% (and getting as high as in the mid-20s), it will certainly send you off into a rewarding high.

Keep an eye on your newbie friends, as this weed will kick back if they get too greedy.

Going by the name and the pungency of its aroma, no one could blame you for assuming that Cheetah Piss weed would be the same as, or at least quite similar to, Cat Piss weed. I mean, piss is piss, right?..

Wrong! Since Cheetah Piss weed strain is a hybrid, its effects will resemble indica and sativa highs, giving you the best of both worlds.

It starts off steady and soon launches you into a state of elation and euphoria, with heightened focus and sociability, possibly even increasing feelings of arousal.

Many creatives describe waves of inspiration coming over them and a sense of enthusiasm to get into some deep, meaningful conversations.

Within a short time, you can feel the high move from elation to mild sedation, easing you into a state of calm and relaxation as the indica side of this strain starts to take effect.

Due to the Cheetah Piss strain’s potent THC content, many people have turned to this strain to ease discomfort caused by stress, fatigue, mood fluctuations, and even constant pain.

Others rely on it to manage their lack of appetite and even insomnia.

Cheetah Piss, despite the name, is a pleasant strain that makes you want to engage and get a little active.

It’s a wonderful social lubricant and, in most cases, a far better option than alcohol. Besides, a slight case of cottonmouth is far better than a hangover.

Probably the most distinguishable characteristic of Cheetah Piss has to be its unmistakable fragrance.

This strain’s pungent aroma lives up to the title of “Loud” and will definitely be a strain you’d want to keep jar-sealed.

This is true especially if you intend to take some with you across town. It’s got a distinct dynamic scent with sharp sour citrus notes, almost bordering on ammonia.

As soon as you break up the nugs, you can smell its powerful diesel scent.

You could easily assume that the flavor of Cheetah Piss weed would be pretty much the same as its aroma.

Then again, you could also be pleasantly surprised to discover that its taste is far better.

Its taste is thick, sweet, and creamy amongst a medley of fruit flavors, such as lemon and apricot.

Layered on top are hints of nut and butter with notes of gas and diesel. It’s not quite a dessert strain; however, it’s divinely delectable and worth every puff.

So put your feet up and enjoy.

Besides running the risk of stinking out an entire busload of people with a loose bud in your pocket, there’s not much downside to Cheetah Piss.

As with most strains, you can expect more common reactions such as dry eyes, thirst and dry mouth, increased hunger, and slight paranoia.

If you’ve overindulged or have a lower THC tolerance, these reactions are more likely to arise, so always consume with consideration and caution. And remember, water is your friend.

If you’re fortunate enough to get your hands on some Cheetah Piss strain seeds, you’ll be pleased to know that this strain thrives both indoors and outdoors with proper care and attention.

The plants produce bright green foliage with dense, forest-green nuggets enveloped in a thick, sticky coating of amber trichomes, with a subtle purple hue across them.

In addition to being sprinkled with yellow and orange hairs, Cheetah Piss buds are a sight to behold.

Indoors you can expect plants to reach as high as six feet, yet outdoors they can grow to an excess of 8 feet!

Good things are always worth waiting for, and harvest day is no exception. I’m sure we can all agree that the 69 days to harvest can be quite a wait indeed.

However, know that all your loving care and attention will deliver quite a rewarding yield.

You can expect flowering to start around the day 50 mark, with harvest just under 2 weeks later.

You can expect indoor yields from 0.5 oz/ft² upwards. For outdoor setups, prepare for an average of 5 – 10 oz/plant.

Are Cheetah Piss and Cat Piss the same strain?

What are the dominant terpenes in Cheetah Piss strain?