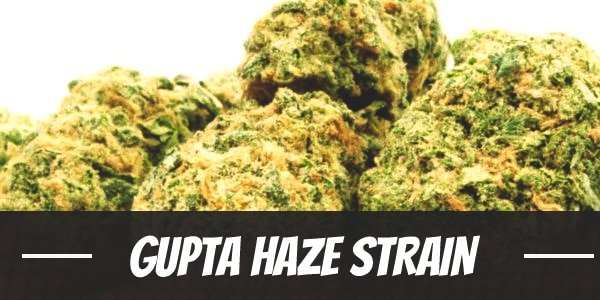 Gupta Kush is, no doubt, among the most well-known strains to ever grace the market. It was developed to honor Dr. Sanjay Gupta. The neurosurgeon, who once publicly opposed cannabis, found that it had helped a great deal of people suffering from chronic health issues. Afterward, he changed his position and has since advocated to legalize medical marijuana. Colorado Seed Inc. deemed it fit to name a potent Indica-leaning strain after him for publicly campaigning for the cause.

One could say that the strain was perfect on its own. However, Colorado Seed Inc. decided to cross it with Tangerine Haze. The Sativa-leaning bud is popular in various states, even bordering on Canada. It has efficient stress-relieving qualities, as well as an elevated recreational high, that draws users in.

What developed from the cross was Gupta Haze. Just like Gupta Kush, it is a highly potent predominantly Indica strain that boasts up to 22% THC but with the sweeter, more tropical notes of Tangerine Haze. Upon consumption, it delivers a mentally clarifying high that refreshes thoughts, sparks creativity, and redefines productivity. However, it could also make for a recreational fall back that could be enjoyed with friends or alone.

Gupta Haze also has significant therapeutic benefits. It pairs its Sativa parent’s mentally clarifying head high with its Indica lineage’s soothing body buzz. As a result, it could be used to manage symptoms of mental and physical distress.

Gupta Haze’s onset starts quite late. Usually, it bides its time; building up a continuous stream of euphoria before swarming the mind. It melts away worries as it brings users to an upbeat disposition before settling.

The initial head high sometimes brings out happy memories from the past. As such, it should come as no surprise that the lips may pursue into a smile every now and then. Used with like-minded friends, it is a great way to bond. It inspires nostalgic conversations along with a few giggles on the side.

Preparing snacks ahead of time will be beneficial for when the stimulating head buzz reaches the stomach. In this way, users need not pull away from the topic or get distracted. It is also for convenience’s sake.

After two to three hours, a light pressure begins to build around the temples. It releases tension starting from the temples, soothing the visible lines around the forehead before moving to the lower extremities. Its deep relaxation blankets the body but, although intense, it rarely causes a couch lock. So long as it is used in moderation, of course.

Gupta Haze has a pungent aroma with earthy influences. Enhancing it are floral, herbal, and sour notes of citrus that intensify after breaking apart the buds. Combusting it, on the other hand, brings out its orange overtones.

There is a slight tang upon consuming Gupta Haze. Its sour, citric smoke has overtones of orange with floral and herbal undertones. On the exhale, it leaves an earthy aftertaste.

A cottonmouth can be expected after toking Gupta Haze. It has moisture-inhibiting cannabinoids that interfere with saliva production. Along with it are red, dry eyes. Most of the time, both are barely noticeable, but users may still manage the discomfort by downing a few glasses of water. Avoiding caffeine and alcohol also help.

Gupta Haze has a citric-flavored terpene profile which contributes to the medicinal effects. Along with its THC and CBD compounds, it delivers an excellent head and body high that effectively curbs the symptoms of certain afflictions. Among it is chronic stress which it addresses by instilling a sense of calm that eliminates worries.

Users with depression and anxiety may benefit from the strain’s anti-depressant, anxiolytic, and anti-psychotic properties as well. It manages symptoms of psychological distress by enhancing the mood and stabilizing turbulent emotions. Its ability to clear the mind is also beneficial to people ridden with PTSD whose minds are ridden with flashbacks, nightmares, and uncontrollable thoughts.

In high levels, the psychoactive compound turns into a natural analgesic that helps appease aches and pains. Its soothing buzz also removes tension or tightness around the joints and muscles. As such, it is of great use to patients with chronic pain issues, arthritis, cramps, and fatigue.

It could also be used as an appetite stimulant. With the help of a health professional, one could gain back the weight lost to eating disorders.

Gupta Haze is a highly adaptable plant. It flourishes in various environments including gardens, farms, near windows, dedicated tents, and small growing spaces. Bolstering its versatility is its impressive immunity against common pests and diseases; making it an excellent beginner’s grow.

Growers have the most advantage indoors. Provisions for its everchanging needs could be easily made through installations of optional but beneficial life support equipment. This includes a small fan, decent lighting equipment, and, possibly, a ventilation system – depending on the grow area.

Situating the fans toward the tops will manage the heat generated by the light as well as prevent the top from burning. As it enters the flowering stage, it would be good to switch to a 12/12 lighting scheduled and 600-watt HID fixtures that accommodate the higher energy needs of the plant.

Sour Haze was aptly name super citrus smell, which is hard to ignore once you come in contact with it. This hybrid is 100% Sativa, and perfect as a daytime smoke. Read full review

And, since it tends to get bushier around this stage, having a proficient ventilation system that is tailored to the size of the growing area will improve air circulation without stripping off moisture from the air. Trimming the plant further prevents the development of humidity-related problems like mold or mildew.

Gupta Haze has a flowering period of 7 to 10 weeks depending on the conditions. When harvest times comes, it could yield between 10 to 12 ounces of buds per square meter.

Flowers begin to bloom around the last few days of September to the fourth week of October. Growers can expect a hefty yield of up to 12 ounces of buds per plant.

Have you ever smoked or grown your own Gupta Haze? Please let me know what you think about this marijuana strain in the comments below.