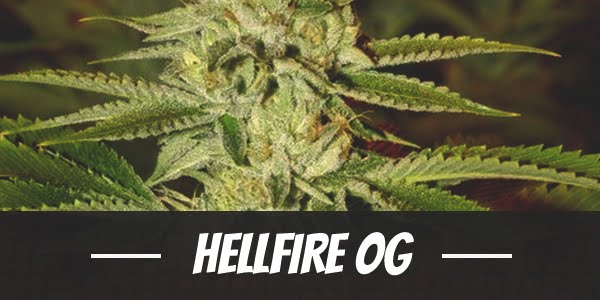 It is difficult to find fault in a strain like OG Kush. It delivers a euphoric high paired with tranquilizing body buzz that could only come from the original Ocean Grown cannabis. Its popularity is so immense that many breeders have used it to create much of the current West Coast varieties.

However, OG Kush is a little finicky to grow. It is sensitive and weak against humidity. And so, a mystery breeder decided to create a hybrid that boasted the well-balanced effects of the former by crossing it with SFV OG Kush. The Indica-dominant her is sturdy and adds flavor. Moreover, it enhances the pharmacological capacity of the strains it spawns.

Together, they produced the renowned powerhouse Hellfire OG. It retains the classic OG scent of lemons and intense psychedelic effects with its potent THC levels. A perfectly split hybrid, it sends users soaring to new heights and cradles them gently during the comedown.

Potent and fast-acting are two words that best describe Hellfire OG. Almost immediately after the first puff, a sense of euphoria swarms the mind and spreads to its deepest recesses. It brightens the mood and leaves users floating on cloud 9 out of sheer happiness.

In time, the uplifting mental buzz begins to ebb down from the temples in the rhythmic fashion of waves. Slow and calming, an heirloom of its excellent Indica genes. It soothes the muscles through and through until users are enveloped in deep relaxation.

Replacing the tightness is a heaviness that plants itself in the limbs. Without a doubt, users are anchored down to their couches until drowsiness sets in. Eventually, most fall asleep and drift off to dreamland hand in hand with Mr. Sandman.

Averaging at up to 20% THC, Hellfire OG is indeed a veteran’s strain. Still, beginners and casual users may still enjoy its powerful well-balanced high through moderation or under the guidance of a seasoned friend.

True to its OG heritage, Hellfire OG inherited a pleasing citric aroma accentuated with strong notes of lemon. Broken apart, it releases an herbal fragrance that turns into a spicy diesel once combusted.

Much like its aroma, Hellfire OG has a citrusy and lemony flavor. However, the influence of SFV OG Kush provides a unique undertone of freshly picked spices and woody pine. On the exhale, it leaves an aftertaste of diesel.

Regardless of the strain, dehydration is certain. Its symptoms of cottonmouth and dry eyes become obvious once cannabinoids begin to interfere with the production of moisture. Thankfully, both reactions seldom cause discomfort. Even so, it is better to stay hydrated by drinking a few glasses of water.

Because of its potency, Hellfire OG can sometimes cause users to become dizzy. It can bring about increased anxiety and paranoia as well especially when used outside of one’s limits. For this reason, marijuana must always be paced and used in moderation.

Though widely used for recreation, Hellfire OG provides a reprieve for a variety of mental and physical conditions through the combined efforts of its THC, CBD, and other cannabinoids. As such, it is of therapeutic value to the medical marijuana community.

Through its happy high, Hellfire OG positively affects outlooks and even calms the mind of overwhelming dread. Its mood-enhancing effects reduce stress levels too. Similarly, it can be used as an anti-depressant to temporarily appease symptoms of mental health conditions like PTSD or depression.

In high levels, the same compound that stimulates the mind also turns into a natural pain reliever. By soothing the body through and through, Hellfire OG relieves various kinds of aches in the muscles beginning from the temples.

Most users eventually fall asleep from the strain’s tranquilizing effects save for a select few who find themselves wide awake, looking for food. Nothing short is expected though. In easing the gastrointestinal tract’s continuous contraction, it relaxes the stomach, stimulates the appetite, and prevents nausea through its antiemetic properties. Such an effect is perfect for users with eating disorders like nausea or for cancer patients experiencing the aftermath of chemotherapy’s invasive consequences.

Hellfire OG inherits the best of traits from its Indica and Sativa genes. It is tall with a fairly manageable height that rarely ever needs topping. And though relatively thin, its stalks are sturdy with a good resistance against sudden gusts of wind and fluctuations in temperature. The plant, however, cannot withstand extreme weather. In the cold, it freezes to death while its roots rot due to high levels of moisture in the air.

For this reason, many prefer cultivating their hybrids in less volatile environments like greenhouses or indoor farms. In this way, they can easily adjust deciding factors like lighting, temperature, and humidity to bring out the plant’s full potential. Moreover, controlled growing spaces offer protection against the unpredictability of nature and pests while ensuring future users are provided a plant that is chemically consistent.

Hellfire OG has an indoor flowering period of 8 to 10 weeks. Once mature, growers can harvest 12 to 14 ounces of buds per square meter.

Garden grown Hellfire OG usually flowers between the second to fourth week of October. It yields heavily at least 12 ounces of buds per plant.

Have you ever smoked or grown your own Hellfire OG? Please let me know what you think about this marijuana strain in the comments below.