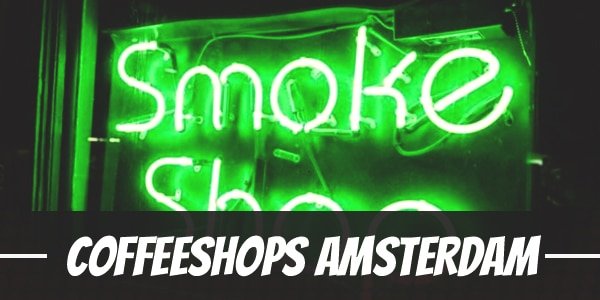 Are you planning a trip to Amsterdam anytime soon? Great choice! Amsterdam is well known for its coffeeshops. You can find more than a hundred coffeeshops in the city. If you’re in the mood for some cannabis, Amsterdam is the place to be.

A coffeeshop is a store where cannabis, such as marijuana, hash and weed, is sold and consumed. Even though the Netherlands is well known for its policy on cannabis, the selling-, use- and possession of cannabis is, officially, still illegal. Dutch law however makes it possible for coffeeshops to sell small quantities to consumers that are over 18 years old.

This is why your ID might be checked upon entering a coffeeshop. As a consumer, you’re allowed to buy and carry a maximum of 5 grams of cannabis per person. Please remember to smoke responsibly. Don’t try to be Snoop Dogg or Wizz Khalifa if you’re not familiar with cannabis.

Now that we’ve covered the cannabis basics, here’s a list of five of most iconic coffeeshops in Amsterdam:

Five of the most iconic coffeeshops in Amsterdam

The first thing you will notice when you enter a Boerejongens coffeeshop is their classy interior with wooden, marble and golden details. The shop differentiates itself through its stylish design, knowledgeable staff and high-quality products on offer for a fair price. There are four locations in the city center of Amsterdam.

A visit to a Boerejongens coffeeshop is a unique experience and completely different from the dark coffeeshops most tourists expect to find in Amsterdam.

Another thing that’s special about Boerejongens is their own seed line and brand, called Amsterdam Genetics. Besides that, Boerejongens also opened up their very first Coffeeshop Information Center right in front of Amsterdam Central Station, where they provide you with information about cannabis; Stopping by is a good idea if you have never smoked before.

The Stud is located at the Molukkenstraat in the east of Amsterdam. Although a little out of the city center, the shop is well known amongst locals because of their good service and quality of the products. Because of this and other reasons, The Stud was recognized as the best coffeeshop of Amsterdam in 2017.

The shop describes itself as the friendliest coffeeshop of Amsterdam. It was founded in the year 1982 and has a lot of loyal customers. You’ll find that the atmosphere at The Stud is open and friendly. The shop is small in comparison to other shops in the city, but has a unique indoor smoking area with an original Marco van Basten soccer jersey from Ajax Amsterdam hanging on the wall.

There’s a giftshop located next to The Stud where you can buy all kinds of merchandise such as t-shirts, caps, lighters, sweaters and more.

Fun fact: Tweede Kamer Coffeeshop was the first to start weighing and packing their products in front of the customer back in the day, which gave an open and transparent feel. Openness and transparency are still one of the core values of Tweede Kamer coffeeshop. There is this also an unspoken rule that staff of the coffeeshop won’t sell anything they wouldn’t smoke themselves.

Green House has a couple of locations in Amsterdam, but the most famous one is called Green House Centrum. It is often packed with tourists because of the many celebrities that visit the store when they are paying a visit to the Netherlands. Artists like Miley Cyrus, Snoop Dogg, 50Cent, Lil Wayne and Rihanna were spotted multiple times at the Green House coffeeshop.

Also check out their location at De Wallen can look over the canal and experience a classic Amsterdam atmosphere.

Besides Boerejongens, the other well-known coffeeshop chain in Amsterdam is Bulldog. The first Bulldog coffeeshop that opened in Amsterdam is located in the Red Light District overlooking the canals. It’s a big shop spread over two floors.

The shop in this particular location originally started as a sexshop back in 1974, and customers would secretly smoke a joint in the back. Over time, it gradually evolved into a big coffeeshop.

If you’re looking for a guaranteed good experience and fair prices, you should check out the Bulldog. Beware that the Bulldog is very well known amongst tourists and locals, so it can be busy in their coffeeshops.

For more information about all the coffeeshops in Amsterdam visit GetSmokin’ https://en.getsmokin.nl/coffeeshops/amsterdam

BACK TO TOP
Basics of Making Marijuana Edibles
Marijuana Cultivation Jobs: The New Frontier
4 Ways To Tell If Your Hookup Is An Undercover Cop