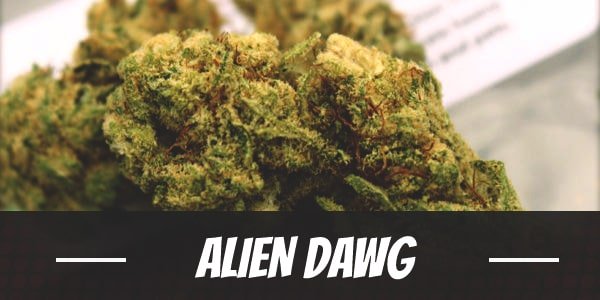 Anyone who has already been exposed to the world of cannabis for quite a while would probably think that the horribly unique names of marijuana strains are entirely normal. While that is indeed true, everyone else can still agree on the fact that these names are sometimes too strange to the point where they start sounding rather amusing.

However, as strange as they may seem, these names express so much about a strain’s lineage. In fact, some of the most unusual cannabis names belong to those varieties with the most impressive qualities and not to mention, have made it to the cannabis hall of fame.

The Alien Dawg is a perfect example of such strain. Sure, its name sounds a bit off at first, but that name carries the lineage of some of the most important cannabis varieties known to man. Although not much is known about one of its parent strains, they still happen to have passed down some of their most notable qualities to Alien Dawg.

To wit, Alien Dawg owes its highly potent quality and strong but pleasant aroma to both of it parent strains. The data below should give a clear picture as to what users can expect out of this strain.

Alien Dawg is considered as one of the most potent hybrids today. It is currently a popular strain among cannabis users in Colorado, Montana and on the West Coast.

Both parent strains of Alien Dawg are recognized for their potency. So, it goes without saying that Alien Dawg itself also boasts of the same strength.

With THC levels that can reach as high as 20%, Alien Dawg is not recommended for novice users. Indulging in just the right amount, the strain will put users in a very relaxing state, without the sedative effect. However, in higher doses, Alien Dawg can quickly induce sleepiness.

The strain can also promote strong feelings of euphoria while leaving users with an improved creativity and uplifted mood. This results in the user feeling more sociable and talkative. In some cases, users may also get the munchies, so it would better to have some snacks lying around while enjoying this weed.

The fragrance of Alian Dawg is a delightful combination of its parent strain’s individual aromas. The sweet and piney undertone of Alien Dawg is from its Alien Tech parent while its distinct sour smell is more of a Chemdawg quality.

Overall, Alien Dawg’s aroma can be described as having a pungent chemical and diesel odor with traces of pine and citrus–a scent that seasoned users love.

Alien Dawg’s flavor is also just as interesting and appealing as its aroma. To wit, users will notice some distinctly sour yet spicy undertones accompanied by the earthy and herbal taste of pine.

Being one of the most potent strains in the market, it is essential to give emphasis on Alien Dawg’s possible adverse reactions.

While the strain’s most commonly reported side-effect is just the usual dry mouth which may be accompanied by signs of dry eyes in some cases, the strain can also cause other adverse reactions that are significantly more severe.

Paranoia and anxiety are also associated with Alien Dawg, so it is smarter to always be mindful of one’s tolerance to the strain’s level of potency and to indulge only on amounts that one can handle.

There are other strains in the market with higher CBD levels than Alien Dawg. But, surprisingly, the strain has still proven itself useful in alleviating some health issues.

For one, Alien Dawg’s relaxing high can be an effective stress-reliever and analgesic alternative. Its mild sedative upshot can also be helpful for patients suffering from insomnia. At the same time, due to the strains ability to induce hunger, it can be used by people who wish to stimulate their appetite.

Alien Dawg is relatively easy to grow. In fact, it can be cultivated either indoor or outdoor. While there is no information available as to the ideal outdoor condition for the strain to thrive, indoor cultivation may require prospective growers to train the plant as it grows bushy.

Download my free Grow Bible and grow your own Alien Dawg!

The flowering time of Alien Dawg should take around 58 to 68 days. Unfortunately, there is no known data or at least an estimate of its indoor yield. Nonetheless, it is best to note that one of its parent strains can offer quite a heavy produce.

Alien Tech’s average yield is a bit unclear, but Chemdawg can offer a yield of as much as per square meter.

The same goes for Alien Dawg’s outdoor yield. Apparently, some growers can estimate its flowering time outdoors, but not its average output. Again, prospective users should do better to just make their educated assumption on the strain’s outdoor yield by considering the average yield of its parent strain, the Chemdawg.

What is the Alien Dawg strain yield?

How much THC does Alien Dawg have?

What are the origins of the Alien Dawg strain?

Alien Dawg was the result of a mix between the Afghani indica Alien Technology and Northern California’s hybrid Chemdawg.

Have you ever smoked or grown your own Alien Dawg? Please let me know what you think about this marijuana strain in the comments below.