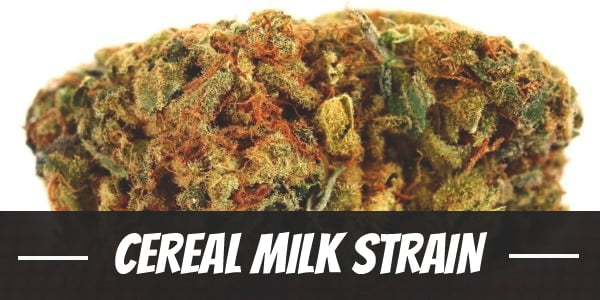 One of the newest hybrid strains on the market, Cereal Milk is already receiving rave reviews. You may have heard about it from High Times or other places, but to be honest, this hybrid is still a bit of a mystery.

This strain originated in California, and its original breeder is not currently sharing.  Those who’ve tried it, however, love it. Cereal Milk is described as smelling like Cap’n Crunch milk or strawberry ice cream. The scent is as powerful as its flavor. You’ll know if you’ve gotten your hands on genuine Cereal Milk.

Cereal Milk is a combination of Y Life, which is a cross between Girl Scout Cookies and Cherry Pie, and Snowman, a Cookies phenotype that’s heavy on the sativa side. This mixture provides a pleasant blend of indica body high and sativa head high, according to those who’ve been lucky enough to try it.

Forget the fact that it smells like a kid’s favorite food, Cereal Milk is potent. It hits quickly, with deep relaxation followed by a euphoric high. Worries melt away as you’re carried away by the delightful buzzy head high. Creative thoughts begin almost immediately and last for the duration of the high.

After about thirty minutes, your body will feel noticeably lighter, while your soul begins to feel more energetic. This is what happens as Cereal Milk eases your tension and stress. There is no couchlock, so casual users can enjoy both creative thoughts and creative ability at the same time. Social situations are no problem with Cereal Milk, as long as you don’t mind other people smelling the source of your new-found confidence.

Buds are particularly dense and covered in trichomes. A little goes a long way with this strain. Don’t be afraid to take it slow and enjoy Cereal Milk in small doses for energy and a mood boost.

Cereal Milk smells just like you’d expect. It’s a sweet, creamy first hit, with a nutty undertone and hint of fruitiness. The scent is powerful, almost like perfume. Besides Cap’n Crunch, Cereal Milk is also described as smelling like Fruity Pebbles.

The flavor of Cereal Milk is just as strong as its scent. You’ll get that sweet, carb-heavy after taste that you’d expect from cereal milk, thanks to its Cherry Pie and Cookie ancestors. The fruity profile is a little more intense in the flavor, but no less sweet, and is pleasantly strong on the exhale.

Like most hybrids, Cereal Milk can lead to dry eye and cottonmouth. Other reported symptoms include slight jitters, forgetfulness, and mild disorientation. In particular, many people report losing track of time, but this generally happens when you ingest a lot. Since the nugs are especially dense, it may be smart to weigh before toking, so the user does not consume more than intended.

You should also expect an increase in appetite. This can be solved by eating actual cereal. Whether this effect is a result of the weed itself or its delicious scent is up for debate.

Based on its flavor and effects, Cereal Milk was probably created as recreational dessert cannabis. However, its wide-ranging effects have therapeutic effects as well.

The well-balanced but potent high is the best of both indica and sativa. Deep sadness and worries melt away after consuming this strain, producing even, happy feeling and a calm mind.  If you are stuck on the wheel of stressful emotions, Cereal Milk is the ticket out.

Cereal Milk has a calming effect, yet it won’t lock you to the couch like other calming strains. Instead, you’ll receive a boost of energy without triggering anxiety or paranoia the way many sativa hybrids do.

This fragrant strain relaxes aches and pains while bringing out creativity. Using Cereal Milk often helps people feel light on their feet, and encourages easier movement, calming the pains of life caused by the joints or inflammation. For those who want to work on a hobby, Cereal Milk is a useful companion that won’t slow them down.

Cereal Milk also effectively induces appetite, making it useful for those dealing with nausea. For those who need it,  the combined pain relief and appetite help can be extremely helpful. The best part? Effects can be felt even in small amounts.

Cereal Milk is currently in limited production in California, so getting your hands on seeds might be tricky. Since the strain debuted the summer of 2019, it hasn’t made its way out into the wider world just yet. Growers are ready and waiting for the chance to see just what growing Cereal Milk is like.

Not many know what to expect from growing Cereal Milk, but we suspect that it will follow in the steps of its Cookie and Cherry Pie predecessors. Overall, its heritage predicts that it should be a moderately sized plant with decent yields. Neither Cherry Pie nor Cookies are a perfect beginner plant, but inside they do well. The combination of the two should yield a pest-resistant plant that prefers stable, warm temperatures, and a stress-free environment to reach its full potential.

Lots of light and space will help Cereal Milk really branch out. It produces notoriously dense buds, so lighting and airflow is key to making sure they grow big and strong. As a true moderate-sized hybrid, using the Sea of Green method or low-stress training will probably increase yields.

It should not be prone to mold or mildew but will be a must for keeping these plants healthy. Heat stress is the biggest problem with Cereal Milk’s predecessors. With a proper setup, you can control the temperature and avoid unnecessary plant stress.

Again, this is a very new strain, so not many people have grown it. However, the strains crossed to create Cereal Milk flower in about 8 to 10 weeks. Indoors, Cookies, and Cherry Pie are known winners and handle both soil and hydro well, so Cereal Milk should too. I’d predict a yield between that of Cherry Pie and Cookies, so between twelve and fourteen ounces per square meter.

Cookies can be a little temperamental outdoors, so if you get your hands on some seeds, be careful with Cereal Milk. Cherry Pie is better suited to the outside, though, so Cereal Milk may be just fine. When growing this strain, keep an eye on the weather and try if it looks like it will be a warm September. Harvest is sometime in mid-October. If the yield follows its predecessors, expect upwards of twelve ounces per plant outside.

FAQ About the Cereal Milk Strain

What is the Cereal Milk strain yield?

Between twelve and fourteen ounces per square meter indoors and upwards of twelve ounces per plant outside.

Does Cereal Milk have any adverse reactions?

What is the flowering period when growing Cereal Milk?

About 8 to 10 weeks, although this is a very new strain so not many people have grown it.