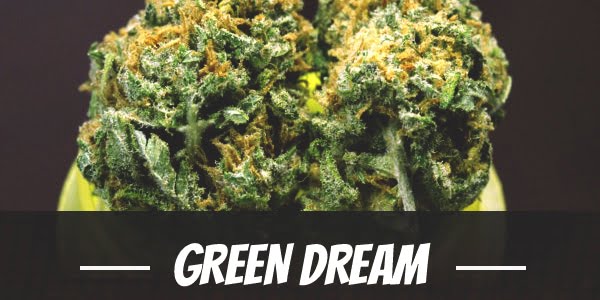 Who would have thought that marijuana can get any greener? We don’t mean the color, of course, as the plant is not exclusively green. We are not even talking about a random nocturnal emission either. This is more like a healthy kind of green. Well, sort of.

While pot can feature different flavors that even novice users would appreciate, there is one particular strain that can truly bring out some nostalgic flavors to all health buffs out there.

Any green tea drinkers in here? The Green Dream strain is certainly one to satisfy the taste buds of cannabis users who also happen to love green tea especially those who like their tea with a little hint of sweetness. This hybrid is widely known to possess a green tea-like taste mixed with some fruity tinge which, by the way, is said to be one of the reasons for its name.

Now, if that is not enticing enough, here are some of Green Dream’s attributes that any prospective user ought to know. Although there is not a lot of information available about this strain that is made available to the public, what is known so far about Green Dream should be enough reason for cannabis users to love it.

Green Dream is believed to be a cross between Green Crack and Blue Dream. Hence, aside from its taste, one can easily tell why it is named as such based on its parent strains.

Download my free Grow Bible and grow your own Green Dream!

With parents that are mostly Sativa, Green Dream is also expected to be a Sativa-dominant strain. However, the exact ratio of its Sativa to Indica concentration is unclear.

Green Dream’s THC level might be every seasoned user’s dream, but it could easily be a novice user’s nightmare. With a whopping 25% maximum THC concentration, Green Dream is regarded as highly potent strain boasting of a prominent cerebral high.

To wit, Green Dream is capable of stimulating the mind in a way that stirs one’s imagination making it possible for users to think more creatively. This mental stimulation is often accompanied by happy thoughts and a profound sense of euphoria that can improve one’s social behavior. Simply put, Green Dream’s head buzz is mentally energizing.

As the Indica effect of the strain slowly creeps in, the user will start feeling a mild relaxation that is never sedative. Instead, it calms the body and helps relieve various health conditions. Due to the dominating cerebral effects of Green Dream, it makes a good strain choice for an early morning medication or a mid-day treat. Now, one can truly say that Green Dream is more like a daydream.

The aroma of Green Dream seamlessly reflects that of its parents. The strain’s overall scent is a combination of the fruity and earthy smell of Green Crack complemented by the skunky and berry sensations of Blue Dream. In effect, users are pretty much like experiencing the best of worlds.

If we break down Green Dream’s flavors, it would be woody and piney coupled with some sweet and citrusy undertones. But, if one has to describe its overall flavor, it should be that of a delicious fruit-flavored green tea.

Although experiencing side effects is common among cannabis users, it is quite surprising for a Sativa-dominant strain like Green Dream to have minimal psychological adverse reactions.

It appears that the most commonly reported case among users is dry mouth. There are some instances though that a user might experience dizziness which is most likely true to those that have a low tolerance to high levels of THC. In very rare occasions, some users can feel the symptoms of dry eyes, paranoia, and anxiety.

The CBD levels of Green Dream is relatively low which makes it less helpful for those patients who benefit on higher CBD concentrations. Nonetheless, the overwhelming Sativa effects of Green Dream make it an excellent strain choice for medical marijuana users to alleviate certain health issues.

For one, its uplifting effect is recognized as an effective antidepressant and stress reliever alternative for patients with those said conditions. Also, the mild relaxation brought about by the strain is enough to provide temporary relief for headaches, fatigue, and mild pain.

Unfortunately, there appears to be no verified information about Green Dream’s cultivation. Although, on a more positive note, prospective growers may refer to its parent strains to at least make some educated assumptions as to the possible growing behavior of Green Dream itself. So, let us examine its parent strains’ cultivation do’s and don’ts.

Green Crack is known to thrive either indoor or outdoor. The strain does well in both soil or hydro medium. For its indoor cultivation, flowering time may take about 7 to 9 weeks. Outdoors, the buds of Green Crack may be harvested around late September to early October.

In the case of Green Dream’s other parent, Blue Dream, it is preferably grown indoors in a soil medium. Pruning and trimming are also advisable. Outdoor cultivation, however, may be possible in Mediterranean climates.

The strain undergoes a flowering period for 9 to 10 weeks indoors while its outdoor flowering time may last until October before the nugs are ready for harvest.

Both parent strains are generous with their harvest, and they can be quite forgiving even to novice growers. However, it is important to note that Blue Dream can be susceptible to red spider mite infestation when grown outdoors.

Considering that both parents of Green Dream can take an average of to complete their flowering period, it is likely for Green Dream itself to have, more or less, the same average indoor flowering time. The same is true for its expected indoor yield.

Now, with regards to its outdoor cultivation, Green Dream is more likely to be harvested around September to October just like its parent strains. Also, the outdoor yield of Green Dream may be just as impressive.

What is the Green Dream Strain yield?

How much THC does Green Dream have?

What are the origins of the Green Dream strain?

Green Dream is believed to be the result of a cross between Green Crack and Blue Dream.

Have you ever smoked or grown your own Green Dream? Please let me know what you think about this marijuana strain in the comments below.