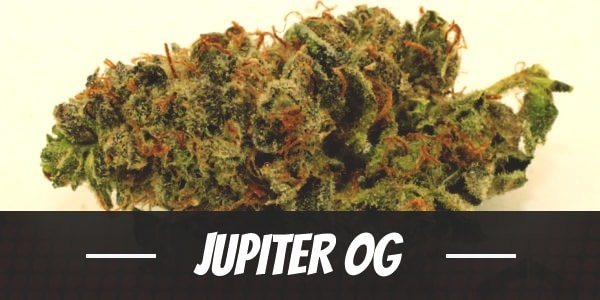 Smoking marijuana has always been associated with a feeling of being spaced-out. Although, in reality, that is not always the case. However, if weed has to have any connection whatsoever with being spacey, then naming them after the different planets in the universe is only reasonable.

It turns out that there are different phenotypes of OG Kush that have been dubbed to represent different celestial bodies. One of them is a strain called Jupiter OG. Now, this name is not just some random association to the largest planet known to man. This strain has certainly earned the title.

It must be the universe and the cannabis world conspiring, but this Jupiter OG strain has some uncanny similarities with the giant planet. The size, the impact, the power… name it, and this strain has it. Read on and get a closer look at this heavenly body that is practically Jupiter’s weed alternate.

Jupiter OG is among the celestial strains of OG Kush phenotypes. It is a relatively new strain that was bred in the 1990’s. As anyone can tell, this strain is named after the largest planet and to mention one that embodies power, Jupiter. Now, it must be easier for anyone to understand why this strain is named as such.

As mentioned previously, Jupiter OG is reminiscent of the real giant planet. For one, the strain boasts of a THC level that can reach as high as 24%, making it a highly potent hybrid with a dominant Indica concentration. This trait greatly resembles the power and dominance of the planet Jupiter itself.

Furthermore, Jupiter OG’s high is regarded as immediate and lasting. The onset usually involves an uplifting head buzz that encourages happy and creative thoughts while sending users into a calming euphoric state of mind.

Now, due to its 75% Indica content, the strain can deliver an overwhelming sense of relaxation that is coupled with some sedative properties which can ultimately promote sleepiness.

The overall high of Jupiter OG lingers in the user’s body for at least an hour or two. On that note, the strain is ideally recommended as an evening medication or a night time treat.

For a strain that exudes so much power, one can also expect it to give off an equally prominent aroma. To be more specific, Jupiter OG has a strong skunky smell that can also be likened to the pungent aroma of fuel – a trait that seamlessly represents its OG lineage.

Jupiter OG embodies a classic weed flavor that most users find pleasantly overpowering. Its overall taste can be further described as a pungent mixture of earth and skunk. This can be an acquired taste to some, but for seasoned users, such combination of flavors is truly incomparable.

If one decides to smoke Jupiter OG, its potency is not the only thing that any user should be worried about. Just like any other strain in the market, Jupiter OG also has the potential of causing some adverse reactions. Hence, users are also advised to be watchful of any signs of side effects.

Note that there is a greater chance for Jupiter OG users to experience dry mouth and dry eyes more than anything. While those are relatively manageable, other possible side effects such as paranoia and dizziness are certainly not to be overlooked.

In terms of Jupiter OG’s contribution to the medical field, the strain’s Indica side certainly takes the cake. The strain’s dominating body buzz is proven to be beneficial to various health conditions.

To wit, the strain’s overwhelming sedative properties can effectively promote sleepiness among insomniacs. At the same time, due to its prominent and long-lasting body high, it can be a great pain reliever for patients suffering from cramps, headaches and other illnesses with same symptoms.

Furthermore, some users can attest to how the strain can stimulate their appetite and control nausea which further leads to the conclusion that Jupiter OG could be a great alternative for users with poor appetite or patients with eating disorders.

The details regarding Jupiter OG’s cultivation are quite limited. However, the strain is widely known to produce a relatively generous yield compared to the other planetary strains from the OG Kush lineage.

The plant may be grown indoor or outdoor. But unfortunately, there is no clear data specifying the ideal growing condition of the strain. Nonetheless, OG Kush is known to thrive better in a controlled environment with an ideal temperature of 75°F. Also, OG Kush does well in a SCROG or SOG setup.

Outdoor cultivation of OG Kush is possible, but only in tropical climates. OG Kush is not the best strain choice for novice growers which, in that case, can also be true to its phenotype, the Jupiter OG.

Jupiter OG’s indoor flowering time can take 65 to 70 days. Although there is no clear data regarding the plant’s average yield, the fact that it is known to be a heavy yielder allows us to make an educated assumption that the strain can produce about 12 to 16 ounces per square meter.

Unfortunately, there is no available information about the strain’s ideal harvest month when grown outdoors. However, note that OG Kush is normally harvested around mid-September to early October. On that note, the outdoor yield of Jupiter OG should be just as promising. An educated estimate is about 20 ounces or more per plant.

Have you ever smoked or grown your own Jupiter OG? Please let me know what you think about this marijuana strain in the comments below.