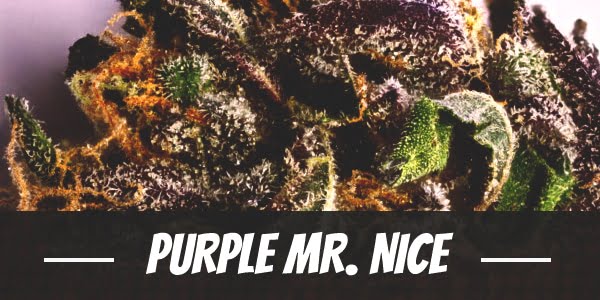 Being nice is easier said than done unless there is something that can help. While being nice is a habit, what we have here is one that induces a person to be nice, in a unique way. So, what is it about the Purple Mr. Nice strain that makes it so?

As it is, this strain is a balanced hybrid that delivers the best of both worlds. While its Sativa side uplifts moods, its Indica side tame users. As such, Purple Mr. Nice users feel euphoric after the strain took away nasty thoughts and depressive moods. At the same time, it also delivers a buzzing body relaxation.

Credit should go to Sensi Seeds for making Mr. Nice available in the market again. If they had not done so, then Purple Mr. Nice would not have existed. But it did, and it took some of the best traits of its parent strains.

To be a little more specific, much of its Sativa effects came from the potent Granddaddy Purple. By adding the Indica traits of Mr. Nice, Purple Mr. Nice has a better balance that delivers a gentler experience. But keep in mind, even if it is milder, it remains a potent strain that can overwhelm anyone using too much.

Purple Mr. Nice delivers a potent cerebral high that users feel moments after taking a puff. It begins by clearing the mind of ill thoughts. As a result, users feel their mood swinging for the better. Furthermore, it also causes users to feel happy and euphoric. The intense head high continues its effects for some time as it now starts to creep down.

Any thoughts of negativity are soon overwhelmed by its powerful Indica effects. The buzzing head high is soon complimented with a relaxing body high. It is for this reason that Purple Mr. Nice became one of the better choices for balanced hybrids. At this point, users tend to feel relaxed but not lazy in an excessive manner. Of course, if one were to consume too much, then it can lead to a couch-lock.

As the intense mental and physical high starts to subside an hour to two later, most people start feeling sleepy. Having said that, it is best to use this strain on a lazy day or when there is nothing else to do. As for medical cannabis users, there are reasons for its use as detailed in the next sections.

Purple Mr. Nice, besides the effects, also inherited its fragrance from its parents. In many ways, the blending of the scents of both its parents made it better. A sweet blend of berry and grape is distinguishable with its musky and earthy scent. A majority of people would, no doubt, find its fragrance agreeable.

Its earthy aroma does not carry over to its taste as much, but its sweet berry and grape scent does. One thing that enhances the smoothness of its smoke is the spicy taste. Besides having a nice scent, Purple Mr. Nice also comes with a great taste.

The intensity of its delivery of cerebral head high may cause a few people to feel dizzy or have a headache. If so, these are rare occurrences and should be gone in minutes.

On rarer occasions, there are also people who are more susceptible to anxieties. Rather than feeling relaxed and euphoric, some may feel a little more paranoid. It can happen to beginners who could not tolerate its effects, especially at the onset.

The above conditions are not likely to happen, but what users are going to experience is their mouth and eyes feeling dry. There is nothing to worry, though, as both do not pose a health risk. Also, dry eyes and mouth are normal reactions with the use of any cannabis.

The incredible head high which takes away negative thoughts can help shift the mind away from pain. At the same time, the powerful Indica effects also dampen the symptoms. It is in this manner that Purple Mr. Nice can offer relief to patients suffering chronic pains and aches.

Its ability to uplift moods and induce euphoria is also beneficial to those dealing with mental disorders. For instance, it makes it easier to manage depression, ADHD, PTSD, and other mood disorders.

As mentioned, users of Purple Mr. Nice feel sleepy once its effects start to wane. Because of that, Insomniacs would find its use helpful as they seek the elusive quality sleep.

As far as we can tell, Purple Mr. Nice is not available in seed form. It appears, though, that there are some people who cloned it successfully. As reported, it loves the sun but thrives better under a shade. Other than that, there is not much information available.

From all indications, Purple Mr. Nice has a typical Indica flowering time. For growers, this is a great news as it is ready in as early as 7 weeks. Our best estimate of its yield per square meter is around 12 to 16 ounces.

Under the ideal condition, our best estimate at this time is that for each plant, Purple Mr. Nice could have as much as 16 ounces yield. As alluded to by some sources, it is ready for harvest during the third week of September.

Have you ever smoked or grown your own Purple Mr. Nice? Please let me know what you think about this marijuana strain in the comments below.