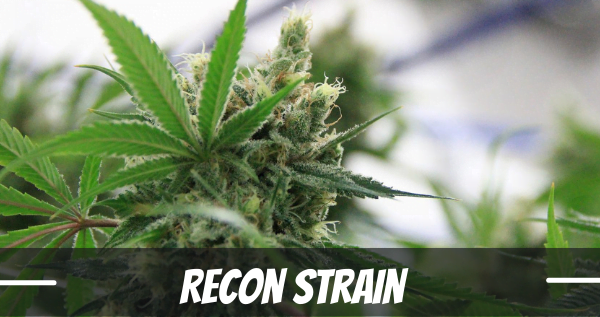 Welcome to this Recon strain review, where we’ve done the recon for you.

Recon strain is an excellent cannabis specimen developed by DNA Genetics. They created this hybrid by mating LA Confidential with Cannadential.

Following in the footsteps of parent LA Confidential, Recon strain is award-winning, taking home 2nd prize at the 2008 South African Cup and 3rd place at the 2010 Outdoor Spannabis.

But what makes it so great?

Recon marijuana strain weed is indica dominant, making it ideal for when you want to let go and relax.

In addition to the strain’s therapeutic effects, these terpenes are also behind its unique flavor and aroma.

Overall, the Recon strain is a weed strain that’ll challenge (and please) just about anyone consuming marijuana, from experienced users to newbies.

If you’re looking to grow your own marijuana, Recon strain is a weed strain that rewards your efforts.

It can be grown outdoors and indoors and responds well to most grow strategies.

It prefers a maritime or Mediterranean-like climate, where summers are warm (but not blazing) with moderate humidity.

If you’re growing outside, the beginning of summer, where temperatures are around  70°F – 80°F, is the best time to get started.

You can look forward to yields averaging 19 oz/plant. Indoor yields are 1 – 2 oz/ft2. Refer to the Recon strain grow info in this review for tips on maximizing your yields.

Recon strain THC percentage ranges from 16% to 23%, putting it on the medium-high end of the scale.

Growing methods influence overall THC, which explains why some Recon strain info notes varieties with just 13%, while others claim it can reach  25%.

That’s quite a difference. You can ensure a THC content you can handle by doing a little recon (the pun was too good to resist) before purchasing any bud or seeds.

Many noted it as having little to no head high, with an intense tingling body stone.

It’s also not uncommon to experience heightened arousal, so keep Recon in mind for your next date night.

Recon strain effects work to ease the mind and slow racing thoughts, with many using it to combat the symptoms of anxiety, depression, ADD, and ADHD.

Recon also increases creativity, but as you lose yourself in the warm embrace of the full-body high, you’ll have little motivation to put your ideas into action.

You’ll also be too lost in euphoria to care, so maybe keep this one for late afternoon, early evening, or when you have little else to do.

It knows what you need, is here to deliver, and wastes no time getting you high. The Recon strain price will vary between retailers.

Quite the opposite – its mix of rich, refreshing, sweet, and spicy earth is intoxicatingly good.

Its flavor profile is quite kushy. It’s carried by a blend of sweet and zesty fruit and complemented with fresh mint, spicy pepper and cloves, and warm, bitter coffee.

One whiff, and it’s clear why many call it the Recon Kush strain.

If the fragrance has you imagining what this unique blend tastes like, you won’t be disappointed.

Myrcene’s soft sweetness contrasts with the peppery spiciness of B-Caryophyllene, and the musky notes found in both terpenes tie the flavors together.

Linalool, a blend of tropical fruits and spicy wood, finishes the flavor off.

The mix of Recon strain terpenes culminates into a delicious smoke that’ll have you bogarting the joint.

Recon kush strain starts with a creep before suddenly taking hold, so go easy with it (especially if it’s your first time or your THC tolerance is low).

Though couchlock is almost unavoidable, the amount you consume determines whether you’ll be happily melting or dropping like a lead stone.

You could also experience some dizziness. Plus, Recon strain’s sedating effect lasts longer than your usual indica, so think about that before you get greedy.

Recon may be tasty on the burn, but it’s not as pleasant on the eyes, which may become dry, itchy, and irritated.

It’s uncomfortable enough to notice but won’t ruin the experience — like journeying through an enchanted forest haunted by a ghost. Recon strain also causes cottonmouth and the munchies.

Load up with water and snacks, and you’ll manage just fine.

Sourcing Recon strain seeds is quite simple, but growing them can be moderately difficult. Luckily, Recon strain grow info is relatively easy to find.

Thanks to its ultra-sticky trichomes, this strain is a cultivator’s dream, but nugs this dense can be a nightmare to handle.

When preparing your setup – indoors, outdoors, or in a greenhouse – monitor your humidity levels. Too humid, and the nugs become susceptible to mold.

Too dry, and the plants might wilt. Another factor to pay attention to is temperature, which must be warm and sunny, but not hot. Between 70°F and 80°F is your sweet spot.

Outdoor grows may be more challenging to manage, but if you’ve got the will, we know the way.

Along with tightly-packed nugs, the plant has large, fan-shaped leaves that can reduce the buds’ access to air and light.

These techniques also prevent the build-up of moisture, which can lead to mold, mildew, and even root rot.

You’ll also need a good set of scissors designed to handle such a resinous strain.

In an area with June summers, your harvest will be ready early to mid-autumn (late September – early October).

Indoor flowering takes 8 to 9 weeks, which is considerably longer than the flowering time of parent strain LA Confidential (6-8 weeks).

Recon produces dense, round buds – typical of an indica.

LA Confidential is a hybrid strain with an indica dominance of up to 95% and a THC averaging 16%-26%.

Its parents include OG LA Affie and Afghani Indica, a 100% indical landrace strain.

Cannadential is a balanced hybrid with an average THC content of 22%. Its parents are LA Confidential and Cannalope.

There’s not much information on Cannalope, and most web searches direct you to Cannalope Haze instead.

Some sources say Cannalope is no longer available, and Cannalope Haze is its replacement.

However, many believe these are simply two names for the same strain.

This debate extends to the strain LA Cannalope, which crosses LA Confidential and Cannalope Haze.

Is it an alias for Cannadential? Or is it the strain’s replacement? It depends on which sources you believe.

What is the dominant strain in Recon?

What is Recon OG?

How is Ghost OG similar to Recon?

They share the same flavor profile, and Recon strain effects are similar to Ghost OG’s. However, Recon focuses more on the body, while Ghost OG seems to have a stronger influence on the mind. Though users experienced happiness with Recon, Ghost OG left them much more uplifted. The strains, while similar, are just different enough to warrant the spawning of a Ghost Recon strain…