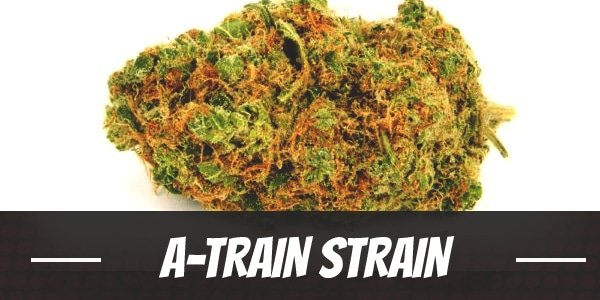 Floyd Mayweather Jr. insists he is the A-side. In the same manner, consumers can think of the A-Train as being on the A-side of the cannabis world.

Compared to many other strains, it seems that the A-Train has a higher than average CBD. A simplistic way of understanding CBD is its correlation to medicinal benefits.

Besides attracting medical cannabis users, there are plenty of reasons for recreational users to seek out this strain. The A-Train strain delivers a perfect balance of mind and body high that among its several benefits, one is an increase in libido.

Before one jumps the gun and thinks of it as a means to get laid, remember that this claim is anecdotal.

Before becoming a part of the A-team, one must first prove itself worthy. For a cannabis strain, it begins with its genetic lineage. In this regard, it does not disappoint as it comes from both a legendary and a wicked family.

Somewhere in northern Afghanistan, one strain grew and became known for its potency. People who have used that cannabis describes the experience as mind-warping. Thus, the legend of Mazar I Sharif was born. This strain that can induce narcotic-like effects is one of the parents of the A-Train.

In most parts of the world, trains have transported more people to their destinations than any other vehicle. So, what happens when a train travels at great speed and loses control? Aptly named, Trainwreck surges ahead and delivers an intense Sativa effect on its users. Like the Mazar I Sharif, it can also induce psychedelic effects.

By crossing the notorious Trainwreck with the legendary Mazar I Sharif, the making of a new legend is born.

Competition is healthy, and it is because of such that there is a lot of innovation. Before marijuana became mainstream, how many breeds were there? In fact, most people at that time would assume there is only one kind of cannabis.

We don’t currently sell A Train seeds. Check out other Hybrid seeds in our marijuana seed bank.

Regardless of reasons, commercial or otherwise, many growers became breeders. They create new hybrids to have a shorter flowering time or be more resistant to pests. In most cases, they take the best traits of two or more plants to grow a new breed.
After learning a few things about its parents, how much of those did the A-Train inherit?

At its onset, users almost immediately feel what it is like to use the Trainwreck. It acts fast and in no time at all, causes people to feel not only uplifted but also euphoric. Using this strain with a group of people, everyone will end up giggling and laughing. It’s even hard to run out of things to talk about because of the ideas that seem to pop in each second. Amidst it all, it is evident that the A-Train takes people on a journey to happiness.

Meanwhile, the strain also comes with a heavy hitting Indica properties. Rushing in with a sedative-like effect, it creeps into the body and causes the muscles to relax. Used in small amounts, the effects of A-Train is manageable. But using it to or exceeding the tolerance limits can wreck users. In other words, overindulgence leads to a couch-lock.

The beauty of using A-Train is that even if one were to find themselves reluctant to move, they remain clear headed. Unlike its parents, which may induce psychedelic effects, most users do not experience that.

In that sense, we can say that the A-Train is, indeed, a better version of its parents.

The A-Train comes with an odor that is reminiscent of hash. Furthermore, this is accompanied by a pungent and earthy smell with a hint of blueberry. In the world of marijuana, strains that come with a slight blueberry smell is almost always pleasant.

Although some of its aromas carry over to its taste, it is less pronounced. Using the A-Train is such a delight with its menthol flavor blended with citrus and an undertone of pine.

We don’t currently sell A Train seeds. Check out other Hybrid seeds in our marijuana seed bank.

For the sake of formality, let us get something out of the way first. The use of marijuana results in some adverse reactions if users are not careful. In most cases, people overindulging will feel their mouth and eyes drying. Also, some people may feel a little headache. Such reactions are typical with the use of all other strains.

But one negative reaction we want to be aware of is that half of the people using this strain may feel a little more paranoid.

Most people using the A-Train use it because it is useful in dealing with fatigue. Along with the mentioned mental effects it delivers, it can also give a boost in energy. Of course, that benefit becomes useless if one were to use too much and become couch-locked.

Like many others, its ability to induce happiness is one way to relieve people of stress. Also, the strain has proven to be effective in dealing with most cases of mild to moderate pains. There are some reports, too, that it helps with nausea and other gastrointestinal disorders.

One other thing about using the A-Train is that it can make users feel hungry. So, it can come down to a battle of the will. On the one hand, users want to get some food. But on the contrary, they also have an almost irresistible urge to keep relaxing.

The A-Train marijuana plant grows well in a Mediterranean climate. Cultivated in an ideal condition, it will thrive very well in open spaces. Of course, privacy could be an issue.

Indoor, growers will have to decide on which medium to use. Using soil, the A-Train will have better flavors while using hydroponics results in higher yields.

The decision to choose which medium becomes more complicated if considering that the A-Train is not a heavy yielder. On average, each square meter can produce 10 to 12 ounces of buds in as early as seven weeks.

This bushy plant, having an open area to grow on, can reach up to 5 feet tall. The best time to harvest is during the second to third week of October with each plant providing 12 ounces of buds.

FAQ About A Train Strain

What is the A Train strain yield?

How much THC does A Train have?

What are the origins of the A Train strain?

A Train was created from a mix between Mazar I Sharif and Trainwreck.

Have you ever smoked or grown your own A-Train? Please let me know what you think about this marijuana strain in the comments below.