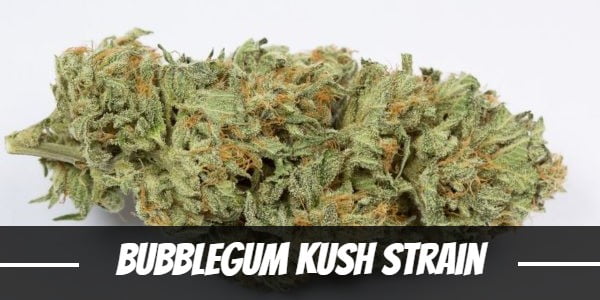 Some things do not change. Since we were kids, we wanted to have fun and be happy.

And one of the things that make kids happy are candies and chewing gums.

So, it is not surprising that in the world of cannabis, there would be a strain named after bubblegum.

Not only does this strain gives you happiness and relaxation, but it has a mild fragrance that is enticing together with a matching great taste.

This strain is bred by the Bulldog Seeds using a cross of two hybrid strains.

One is Bubble Gum, the other one is an undisclosed Kush. It seems like the breeder is not ready to disclose its trade secret, but even so, what does it matter?

All we know is that it smell and tastes nice, and its effects are wonderful.

Candies and gums are the happy times, and so is the Bubblegum Kush. This is an Indica-dominant strain that has an average THC level that will not blow you through the roof.

The onset of its effects on head high is not the same other strains where Sativa is more dominant.

Even so, Bubblegum Kush has a subtle kick that begins with feeling good and happy. And it slowly increases in intensity, but not to the point of bringing you to a dreamlike state.

Bubblegum Kush is a happy strain in that it not only makes you feel that way but also make you want to giggle and laugh.

Now, anytime we have a happy strain, we think it can be good for social settings and parties. But not for this one, though.

That is because it is Indica-heavy, which means its sedative property will creep into your body and give an overall good feeling.

Not only do you calm down, but your muscles relax and when you combine that with the mellow head high, can make you feel sleepy an hour or two later. For that reason, Bubblegum Kush is more suited for use in the evening.

A great thing about Bubblegum Kush is that while it is Indica-heavy, it does not make you feel lethargic or lazy.

But while you may not feel drained, it just feels good to stay on the couch.

As kids, we love chewing gums because of its taste and also its smell.

This strain reminds you of the times you have a piece of chewing gum in your mouth. It has a sweet fruity smell of lemon that is mild and great-smelling.

The taste of Kush is detectable mixed with the slight hint of candy. As you exhale, you might detect a floral aftertaste.

The flavor of Bubblegum Kush actually is milder than how it smells. Somehow, the smooth and mild flavors make it seem easy to smoke.

Did you know that smoking cannabis can have adverse reactions?

A couple of the most common ones are dry mouth and dry eyes. Bubblegum Kush also might cause a headache, much more so than when compared to most other strains.

Keeping yourself hydrated by drinking lots of water helps in reducing the symptoms of the above-mentioned adverse reactions.

Another reaction that could be expected would be bouts of dizziness, but this is mostly due to your tolerance level. Some people simply have a higher tolerance than others.

Smoking too much may also induce a higher level of anxiety.

So, you will want to stay on the conservative side. The thing about smoking too much is that rather than the medical benefits, it may actually worsen some concerns if overusing.

Even with a low CBD, Bubblegum Kush has gained loyal medical cannabis users.

It is actually quite effective in managing stress and anxiety issues including depression.

While other strains lessen stress with a strong cerebral high, it is the body relaxation plus the mellow head high that does it for this strain.

Looking to buy seeds like Bubblegum Kush? Check out our marijuana seed bank.

Besides mental health, Bubblegum Kush is also popular with those suffering from chronic pains and aches. Other medical benefits of this strain include stimulating better appetite.

Bubblegum Kush can be grown both outdoor and indoor, as well as in a greenhouse. It also thrives well in hydroponics.

This strain is one of the favorites of growers because of its generous yield.

So, if you are not too particular with the strain, but more on quantity, then this strain should satisfy your desires.

You do have to put in the work, though. For instance, this plant will have lateral branching.

Considering the weight due to its tight and dense buds, then you will have to provide support as well as maintain it regularly.

While it could be grown indoors using soil, the best way to grow Bubblegum Kush indoor is to use hydroponics. Aside from shortening the flowering time, you could also maximize the plant’s yield by employing Sea of Green (SOG) and Screen of Green (ScrOG) methods of growing. The estimate flowering time is around 8 weeks, and by then, feel the excitement as you harvest an estimated 24 to 26 ounces per square meter to fill your jars.

Outdoors, we do not have much information, but we do know it grows well in a Mediterranean climate. The expected flowering time is October and by then, it should be able to produce at least 30 ounces or more per plant.

What is the Bubblegum Kush strain yield?

How much THC does Bubblegum Kush have?

What are the origins of the Bubblegum Kush strain?

Bubblegum Kush was created from a mix between Bubblegum and an Unknown Kush.

Have you ever smoked or grown your own Bubblegum Kush? Please let me know what you think about this marijuana strain in the comments below.

I’m growing this plant outdoors with little Maintenance and no nutrients. We have plenty if rain here And i haven done an to help but just lett it grow. Im curious to Witness the yield.