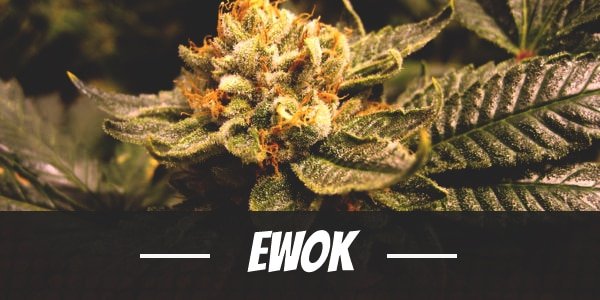 Looking around, how do we know who is a true friend, while the others are mere acquaintances? So, we agree that friendship is hard to come by, and that leads us to a new kind of friend. If we cannot find good friends on earth, then it is time to look beyond milky way.

From the moon of Endor, Ewok traveled all the way to be our best friend. The great thing about this new pal of ours is that it brings with it wonderful effects that are uplifting. And for those who are having trouble sleeping, or dealing with pain, Ewok has something for that too.

Only those who are heavily stoned would believe Ewok is a real-to-life alien living on earth. It is actually a cannabis strain bred from two prominent hybrids – Albert Walker and Alien Tahoe. For whatever reason, on why it was named after Ewok, it could have something to do with one of its alien sounding parent strain.

At this point, any comparison or analogy used to describe Ewok and the Star Wars movie ends. No, this strain does not take users to a psychedelic journey to visit the stars. What it can do, though, is to bring one to a buzzing mental high without causing one to lose focus. In fact, some people may find the onset of the cerebral high conducive to creative thinking.

For most people, the onset of Ewok means feeling uplifted and happy. Now, as mentioned, some may even experience a boost in creativity. All that is good but remember, this is more of an Indica strain. Once the physical effects creep in, it does a lot of wonders, but feeling energetic is not one of them.

Still, compared to others, even with an above average potency, it Ewok is not likely to cause one to feel lazy. It should also be noted that using too much will become overbearing.

If only one word can be used to describe its smell, then it has to be pungent. Ewok, along with its wonderful effects, also comes with a strong odor. To give you an idea, one user describes it like this. DzYou can have 15 jars of other strains in a room, but once you open a jar of Ewok, its smell overpowers everything else.”

Nonetheless, Ewok with its earthy fragrance blended with the fruity tone of lemon is pleasant to smell.

When it comes to its flavors, Ewok does not disappoint. As its smell carries over, the added taste of pine works to make it a delight to smoke

It is almost a certainty that anyone using this strain are bound to feel their mouth drying, possibly including the eyes. For that reason, it is a great idea to have a pitcher of water nearby – for drinking, that is.

Even if Ewok helps people feel uplifted and relaxed, it also should not be used by those who have anxiety issues. Unfortunately, it is also known to increase the level of anxiousness.

While it does not generate the intense high like other strains, it is still potent. On some instances, it could also cause some people to feel dizzy.

While Ewok is a good strain for recreational users, it is, without a doubt, a great strain for medical marijuana users. Again, if one has issues with anxieties or dealing with depression, read the part on adverse reactions.

The most common reason why Ewok is a great choice is because of its effectivity inmanaging inflammation. As such, it is effective in reducing the symptoms of pains due to muscle spasms, and those brought about by other illnesses.

Other than pain, because it does help in inducing happiness, it makes managing stress easier. One thing that it also does is to cause users to feel sleepy. That means insomniacs and Ewok could be good friends.

There is no need to get on a spaceship to go all the way to another galaxy to get your hands on Ewok. In fact, all you need to do is to buy the seeds and grow them yourself.

Yes, Ewok can be grown outdoor. But if nosy neighbors are a problem, then grow it indoor. One thing, though. It has a strong odor, so the use of carbon filter is recommended.

Grown indoor, keeping it to around 3-1/2 to 4 feet can be done, and this makes sense as most indoor growers do have a limited space.

Ewok is ready for harvest in around 8 to 9 weeks. From what we could gather, it should be able to provide about 11 ounces per square meter. But there are also other sources claiming it produces so much more.

Be thankful the arrival of Ewok does not take centuries as all it takes is around two months. Getting your hands on some 14 ounces per plant is around the last week of September towards the first week of October.

Have you ever smoked or grown your own Ewok? Please let me know what you think about this marijuana strain in the comments below.