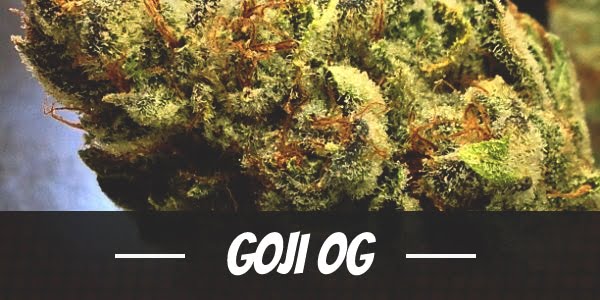 It sounds Japanese but it is not. Instead, Goji refers to a species of berry also called Goji berry or wolfberry. Regardless of why the original breeder named it after a fruit, it is what this strain can do that is of interest.

Because it is a Sativa dominant hybrid, we can expect the typical cerebral effects. Goji OG does come with an above average THC level, which means newbies should use this with caution. Not that it is going to harm anyone, but overusing may lead to sitting on a couch for a few hours.

As mentioned, this strain took its name from a berry because of its fragrance and taste. Bred by Bodhi Seeds, it is a cross between two hybrids – Nepali OG and Snow Lotus.

At its onset, there is a sudden wave of sensation filling the mind. Immediately, users start to feel the weight of the world taken away from their shoulder. In other words, Goji OG delivers an intense mental high because of its high potency.

As the buzz continues, relaxation envelopes the body. For most users, they find themselves feeling elated and happy. In a social gathering, Goji OG can liven the group and get everyone sociable, talking and laughing. It also causes users to feel more active, unlike others which lead to couch-lock.

A couple of hours after using Goji OG, or even before, users tend to feel hungry. It should be easy to get up and find food. Fortunately, this strain is not the kind that sedates the body and keeps one from moving.

One thing about Goji OG is that it has a strong odor reminiscent of its OG lineage with strong hints of berries. It becomes more pronounced after breaking the nugs as an undertone of licorice could be detected.

While it has what can be said as ordinary for a cannabis hybrid, it does have a unique taste. As its fragrance carries over to its taste, Goji OG has an interesting mix of cherry and strawberry blending in with berries.

A common reaction when using  is having dry eyes and mouth. These conditions are not serious and in fact, are a result of using any cannabis strain.

Where one should pay attention to is in a couple of other negative reactions. One is feeling dizzy and this is common among new users. Feeling dizzy is temporary and should be gone in a few minutes. Another is feeling more anxious or paranoid. For newbies to using cannabis, the sudden rush of cerebral high may cause them to worry.

Unless one is physiologically susceptible, a great medical value of Goji OG is in stress relief. As such, it can help people going through mental health issues such as depression.

Unfortunately, Goji OG has a low CBD value. It means that it cannot be used by patients suffering from seizures or epilepsy. As for chronic pains and aches, it may help in mild cases. Chances are high that this is due to the cerebral effects where users are more focused on positivity and feeling euphoric that they ignore mild pains they have.

Growing Goji OG is possible as seeds are available at Bodhi Seeds. There is also a choice of growing it outdoor, indoor, or even in a greenhouse. In either environment, it should thrive well. Of course, if grown indoor using hydroponics, it further shortens the flowering period.

In most cases, Sativa strains take up to 10 weeks, sometimes even 12 weeks to grow. Goji OG, on the other hand, may be a mostly Sativa strain but it grows like an Indica strain. One of the fascinating things about cultivating this plant is because of the two possible phenotypes it becomes. One is a bigger version which smells more like a traditional OG, while the other is a smaller strawberry smelling phenotype.

Goji OG is considered an easy-to-grow strain, especially the new generation of seeds. In the past, the stems need to be supported. But the new breed has far sturdier stems, which almost eliminate the need for stalks.

An advantage of growing marijuana indoor is that it makes it possible for those who do not have an outdoor area. Even so, there are those who do not wish for neighbors to know what they are up to. Regardless of reasons, the result of doing it indoor, especially when using hydroponics, is the explosive growth.

Goji OG already has a shorter flowering time than most other Sativas but this is further shortened with hydroponics. Consequently, in around 9 weeks, a massive yield of 21 ounces per square meter should deliver a cerebral high to the grower without even smoking one.

According to Bodhi Seeds, the flowering stage should be planned for October. If Goji OG can produce a massive yield indoor, then it is better outdoor as it can give an astonishing 42 ounces per plant.

Have you ever smoked or grown your own Goji OG? Please let me know what you think about this marijuana strain in the comments below.