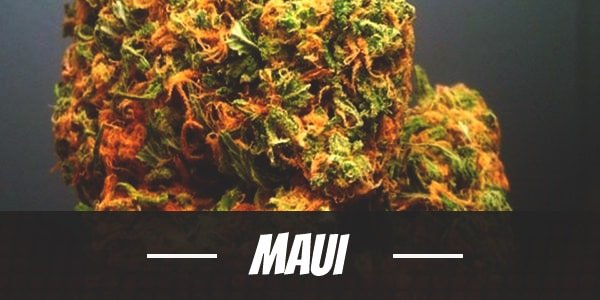 As soon as one hears the word “Maui,” what comes to mind is having fun under the sun and plunging into the sea. In that sense, Maui cannabis strain does that too, and then more.

Using Maui strain is like going to a beach and getting into some water adventure. Once done, then it’s time to hit the sand and laze around. As always, we will have more of what it’s like to use this strain in another section.

The consensus here is that Maui is a descendant of Hawaiian Sativa. But some people say it could also be a cross between the Hawaiian Sativa and a Mendocino hybrid.

Regardless of its exact origin, what we do know is that it’s popular in Mendocino County. As such, it adds weight to its supposed genetics as mentioned. Also, we saw some sites selling the strain claiming that it’s a direct import from the island of Maui, but we are not so sure about that.

Different strains have different effects. As such, no one strain is perfect for everyone. In the case of Maui, think of it much like being on the beach with friends.

After spending time engaging in water sports activities, it’s time to take a rest on the beach. After talking for half an hour to an hour, friends now could doze off for a while. In a nutshell, that is what Maui strain can do.

At its onset, it gives users an uplifting feeling and a boost in energy. With the users feeling alive and ready for action, the gentle mental buzz starts to induce a warm sense of happiness. For some people, they may also feel euphoric. If the user is in the company of other people, then expect Maui to cause that person to be talkative. In other words, turns the deaf into public speakers.

We are not clear on how balanced the hybrid is, but even if it is believed to be a perfect split, its effects suggest that it is more on the Sativa side. Nonetheless, the gentle body buzz that accompanies the mental high provides a relaxing feeling. At this point, most people would start feeling lazy. As a result, drowsiness sets in and its users end up sleeping.

Maui comes with a scent that reminds people of being in a tropical paradise. It has a pleasing sweet smell of fruits that almost feels soothing.

So, the strain comes with a pleasant smell which carries over to its taste. Even better, the influence of its Hawaiian Sativa is evident with the taste of pineapple blended in, which makes it very tasty.

What happens to people lost at sea when they start to drink salt water?

Yes, the same effect is evident when people overuse the Maui strain. In such cases, users feel their throat, as well as their eyes, drying. Other than that, there is not much to be concerned about its use.

On rare occasions, some people may feel a slight dizziness or a mild headache. In extreme cases, it could be feeling a little more paranoid. None of these symptoms are likely to occur unless users exceed their tolerance limits.

In general, Maui is a great strain to feel relaxed and happy, and even cheerful. As such, it has a direct benefit to people with depression. As a matter of fact, dealing with stress and depression are the top two reasons why medical marijuana users choose this strain.

Because its Sativa side gives a boost in energy, it also follows that the weed is helpful in dealing with fatigue. One thing though, that same effect is also negated once the body buzz takes over. At this point, this is when users start to feel sleepy. And having said that, the strain is also good for evening use.

One thing also about using this strain is that many people also start to feel hungry. We know some people need a boost in their appetite. Maui strain may be the solution to people with poor appetites.

Finally, one of the things people look forward to when using marijuana for medical reasons is its ability to suppress pain. Unfortunately, Maui can only help with mild pains and aches. Still, it is better than nothing

Cultivating Maui is unlike most other cannabis strains. For one, it does grow indoor, but growers will need an ample space. Because it grows up to 8 feet tall, that means the best setting is in a greenhouse. Out in the open, this is where the plant thrives well. It takes a longer time for it to reach maturity but once it does, it will reward growers with a significant yield.

One last thing. Growing Maui may not be that easy. As such, it is better left to experienced growers to cultivate. Outdoor, because of the open space, it grows to its full potential under a lot of sunlight. Indoor, it is another story. Because space may become a concern, many training methods suit the plant well.

Maui grows well in soil or using hydroponics. In a greenhouse with enough space, the plant reaches maturity in around four months. By then, the estimated yield is between 32 to 64 ounces per square meter.

This plant thrives the best unrestricted in warm climates where there is a lot of sunshine. If taken care of properly, these tree-sized plants will have a yield of 32 to 64 ounces each.