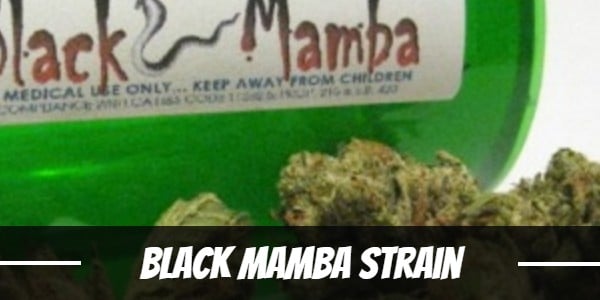 There are at least three or four different strains that go by the same name. But then again, it could also be because some people took theories on its origin as facts. In other words, it could be one strain but listed as having different genetic origins.

So, for all intents and purposes, we are focusing on a particular strain that is more Indica dominant. It is also one that not only gives users a great body relaxation but one that has great medical benefits. Possessing a higher than normal CBD, the Black Mamba strain we are talking about is one that can ease pains.

It seems that there is no consensus on the exact genetic lineage of Black Mamba. For instance, there is a variant that is a cross between Blue Bubblejuice and Black Domina. This one is pretty much a balanced hybrid so it is, for sure, not the same as what we are featuring here. Another is a cross between two Sativas, Vietnamese and Black Congolese. Again, this cannot be the parents of our Indica dominant strain. Still, there is another which could be an offspring of Critical Mass and Skunk. Finally, it could also be a cross between Granddaddy Purple and Black Domina.

The potency of a strain can sometimes be confusing. For instance, the THC levels of one strain differ from one batch to another, as well as one source to another. Nonetheless, over time, we have come to realize what it can do for most users.

Black Mamba does not have a powerful onset but if one were careless, it can knock one out. For some, as the effects kick in, they feel a slight pressure mounting on their temple and around their eyes. Soon, a gentle sensation of relaxation starts to envelop the user. In turn, this leads to the general sense of feeling uplifted and happy. In some cases, there are also people who feel euphoric.

Naming this strain Black Mamba must have due to the potency of a venomous African snake. Its powerful Indica effects also come with analgesic properties. It means that using a little too much is likely to lead to a couch-lock. Other than that, its ability to induce deep relaxation is one reason for using this strain.

Black Mamba has a skunky tone which is in stark contrast of a sweet and almost floral scent. As strange as this combination is, it does work well together as most people should find it agreeable. It may not be the best smelling cannabis hybrid, but it should not turn away people.

As for how tastes, the stronger tones of pine wood blends in as its scent carries over. While it is almost undetected in its smell, the hint of berry is evident as one takes a puff. It is due to the fruity blend that users find the Black Mamba a delight. Its smoothness during inhalation and exhalation is also a bonus.

Using cannabis is not without its adverse reactions. The good thing about Black Mamba, if one can call it like that, is that it does not pose a danger. Experiencing dry mouth and eyes is common and is not detrimental to the health.

About the only thing that users should keep in mind is to use cannabis within limits. Otherwise, excessive use heightens the negative reactions.

Looking to buy seeds like Black Mamba? Check out our marijuana seed bank.

Like many hybrids, Black Mamba is of great benefit to medical cannabis users. The heavy Indica effects aid in the alleviation of pains and aches, including headaches. Its ability to induce body relaxation helps in reducing stress. As such, it may even be useful to people dealing with depression.

As is the case with many Indica heavy strains, after an intense body high, users feel sleepy as it wanes off. For this reason, Black Mamba is one strain that is excellent for passing time. But if there are things to do, then its use is going to be a hindrance to accomplishing tasks. For Insomniacs, the fact that it can make people feel sleepy should be a great news.

The Black Mamba (Kobe) retired as one of the greatest of all time in the NBA. With no hope of matching that greatness, we can grow greatness instead. Black Mamba, the plant, grows in both outdoor and indoor environments. Either way, so as long as the climate is the same as the Mediterranean, it will be fine.

As the popularity of growing plants indoor keeps growing, there are two choices here. Growers have the option of using soil as a medium or better, use hydroponics. Although there is more work to do when growing indoor, plus it is more expensive, the rewards are worth it.

It takes around 8 weeks for the Black Mamba to be ready for harvest. But using hydroponics could shorten that by a week. Regardless, the estimated yield per square meter should be around 12 to 16 ounces.

If grown outdoor, Black Mamba should be ready in the last days of September to the first days of October. We could not find a definitive source, but it is safe to assume that the yield for each plant would be around 16 ounces.

What is the Black Mamba strain yield?

How much THC does Black Mamba have?

What are the origins of the Black Mamba strain?

Have you ever smoked or grown your own Black Mamba? Please let me know what you think about this marijuana strain in the comments below.