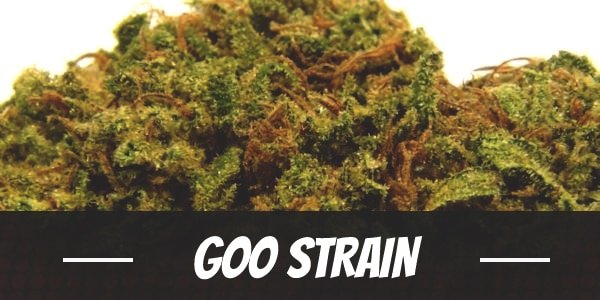 Of all the names one could pick for something that gives such as nice and wonderful feeling… and the one word picked has to be Goo. To be clear, Goo the strain is far from goo the word, which means slimy. Rather than something repulsive, what we have here is a dense green colored bud with amber hairs and sticky resins, a delight to cannabis connoisseurs.

Goo is a potent and heavy Indica strain sought after for its sedative like effects on the body. Not only does it induce a total body relaxation but it also helps in taking away pains and aches.

There are other strains that sound like Goo but are completely different. For instance, there is Afgooey (or Afgoo), and then there is The Goo, a Sativa dominant hybrid. Strains having the same names are not uncommon in the world of cannabis. In some ways, considering there are over a thousand different ones out there, confusion in names do happen.

Goo is a cross between the delicious Blueberry and the pungent and skunky Hindu Kush. Both its parents are considered as among the better strains ever created and with that pedigree, Goo has a lot to live up to.

A lot of people who use Goo for the first time may think it is a gentle strain. In a way, that is true as it does deliver a smooth physical high. As the whole body starts to relax, this creeper continues its onslaught. In some instances, it may even be a sharp rise in its intensity. As a result, users tend to feel lazy and would rather stay in one position.

We don’t currently sell Goo. Check out other sativa dominant in our marijuana seed bank.

Goo, tested to have as high as 24% THC is a highly potent strain. Among the best strains to use at the end of the day for relaxation, this hybrid is one of the best. One thing it does is to make users feel sleepy. However, if there are still things that need to be done, then this strain should be avoided. Its sedative-like effects also cause one to feel spacey

No one ever said this is a great smelling strain. From one of its parents, Hindu Kush, it inherited a dank earthy odor. But thanks to its other parent, Blueberry, the blend of sweet blueberry smell makes it tolerable, and for some, even pleasant.

In most cases, the scent of cannabis carries over to a certain degree to its taste. But that is not the case here with Goo. Rather than an earthy flavor, it has a more distinct taste that is reminiscent of pine wood. Upon exhalation, the lingering taste of berry fruit makes it delightful.

Anything that is so good must have something on the opposite side. It is true with Goo as much as it is with anything else. So, the use of this strain does come with a few negatives, all of which are nothing to be worried about.

For the uninitiated, using marijuana results in feeling the mouth drying, and sometimes even the eyes. Such is the reality that cannabis users have accepted. Other than that, some known concerns could be feeling dizzy or having a headache. In both cases, they are usually mild and should be gone in a few minutes.

Keep in mind, too, that reported cases of negative reactions are mostly based on people using cannabis within their tolerance. But once a person uses too much, then the potency of the marijuana could be overwhelming.

A strain that has a potent sedative-like property makes it a great choice for medical marijuana users. Because it is almost a guarantee that anyone who uses this weed will fall asleep, it makes it an invaluable ally of Insomniacs. In fact, dealing with insomnia is the top reason why medical cannabis users choose this strain.

We don’t currently sell Goo. Check out other sativa dominant in our marijuana seed bank.

At the same time, another reason for choosing Goo is in pain management. A lot of users attest to its effectivity in helping them deal with pain. In fact, this is a scenario often presented by pro-cannabis activists pushing for its legalization.

Patients suffering from illnesses that cause pain makes for a miserable life. Here is where strains such as Goo can help. Once its effects creep into the body, not only does the patient feel relaxed, but they soon forget about their pains and aches and go to sleep.

We do not have as much information on growing Goo as we would like, but the little we know is that it thrives well in both outdoor and indoor environments. One thing would-be growers need to take into consideration is that it does have a strong odor. So, regardless if planted in a backyard garden or placed inside a grow tent, there is a need to take care of the odor. There is nothing much one could do outside, but inside a tent, it can be taken care of using a carbon filter.

About the only time that Goo can give a grower a Sative-like high is when it is time to pick its buds after 7 to 8 weeks of cultivated. At this time, it is reported that the yield per square meter could be as much as 48 ounces.

Similar to planting Goo indoor, it is as generous with its yield per plant. What growers can look forward to, come October, is gathering 48 ounces of Goo, that should uplift the mood of the grower in an instant.

What is the Goo strain yield?

How much THC does Goo have?

What are the origins of the Goo strain?

Goo was created from a mix between Blueberry and Hindu Kush.

Have you ever smoked or grown your own Goo? Please let me know what you think about this marijuana strain in the comments below.