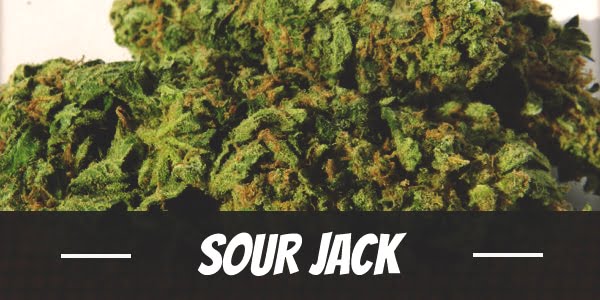 When breeders decide to cross some of the most well-renowned cannabis varieties, the best way to introduce their child strain to the cannabis community is to simply derive its name from its parents no matter how awkward the result may be.

On that note, let us take a closer look at one particular strain called Sour Jack. The name is clearly not the most attractive but wait until this strain reveals its true power. Fortunately, Sour Jack has a proud pedigree to back itself up and not to mention, a long list of awards from several Cannabis Cups.

In this case, it is no longer necessary for breeders to get extra creative with its name. Also, it might be just a coincidence, but there is also a drink called Sour Jack which happens to be quite as strong as the strain itself.

Now, it almost seems like the name Sour Jack is synonymous to superiority and strength. Well, let us see about that in the following data below.

Sour Jack has one of the most reputable lineages among all the cannabis varieties. It is believed to be bred by Karma Genetics who crossed two of the most popular strains: the Sour Diesel and Jack Herer. Thus, the name Sour Jack.

The result of this cross led to the creation of an award-winning hybrid that is equally impressive as its parents. To wit, Sour Jack has won several Cannabis Cups over the years that sealed its name among the A-list strains known to the cannabis community.

Sour Jack is made up of an equal concentration of Sativa and Indica. However, the effects of the strain are leaning more towards its Sativa side. Combined with a 22% THC level, Sour Jack is certainly a force to be reckoned with.

This impressive THC content has the potential of causing some psychoactive effects such as sound and visual hallucinations which are rather entertaining to seasoned users. Hence, the strain may not be the best choice for those who are not up to the experience.

Moreover, the strain is capable of hitting right in the head with just a single blow. Users will feel a sudden rush of positive energy that is overwhelming with happy thoughts and creative ideas. This head buzz sends users into an uplifting euphoria that improves the overall mood and can further prompt giggles.

This spark of intense energy may be coupled with a mild relaxation that does not have the slightest tendency of promoting couch-lock. However, users might get the munchies while smoking Sour Jack.

Note that Sour Jack’s high can last for a few hours. One that note, it must be used ideally during the day when users can better maximize the strain’s energizing cerebral effects.

Source Jack’s aroma is pretty intense but in a good way. The strain has a pungent fuel smell coupled with its signature sour odor that it more lemony and citrusy in nature. Overall, the strain has a classic aroma that seasoned users will certainly love.

When smoked, Sour Jack’s diesel and tropical flavors come out even more. Users will notice an interesting mix of sweet and citrusy lemon with hints of pungent diesel. This might be an acquired taste for some, but for a classic cannabis fan, these flavors are to die for.

As expected, Sour Jack can also cause some adverse reactions that commonly manifest among cannabis users.

In this case, users are very likely to experience dry mouth. However, due to the powerful cerebral effects of the strain, some users may notice signs of anxiety and dizziness which may have a slight possibility of leading towards paranoia.

Considering the intensity of Sour Jack’s uplifting high, it is no surprise that the strain can effectively help manage depression. The overall boost in a user’s mood can alleviate stress and fatigue just as well.

At the same time, depending on the user’s biological makeup and reaction to the effects of the strain, it might promote sleepiness among insomniacs. Meanwhile, other patients who are in pain could potentially find temporary relief from using the strain.

Unfortunately. Sour Jack is a rare strain and may be difficult for growers to obtain just like its parent, Jack Herer. On top of that, the information about its cultivation is quite limited which leads us to make some educated assumptions based on its parents’ growing behaviors.

Sour Jack, just like any hybrid, can be grown indoor or outdoor. However, the question lies in the plant’s ideal growing condition. While this information is not readily available, prospective growers should just consider the fact the both its parents, Sour Diesel and Jack Herer, thrive in Mediterranean climates with daytime temperatures between 72° and 80° Fahrenheit.

Sour Jack is said to have an indoor flowering time of about ten weeks. Other sources, however, would argue that this stage may take as long as 12 weeks.

On that note, prospective growers should know for a fact that both its parents have an indoor flowering time of 10 weeks, so it likely for the strain to acquire the same trait.

Sour Power does not waste time. It kicks in hard at the onset, and that is to be expected. In some tests, its THC has been measured to reach as high as 29%. Read our full review!

Moreover, Sour Jack can offer moderate yields at 12 to 16 ounces per square meter if grown indoors.

There is no verified data regarding Sour Jack’s flowering time outdoors. However, note that Sour Diesel’s harvest time is around early November while Jack Herer’s is as early as mid to late October. Considering these facts, we can assume that Sour Jack’s nugs may be ready for harvest around those months as well.

As for its outdoor yield, Sour Jack should be able to produce around 16 ounces or more per plant.

Have you ever smoked or grown your own Sour Jack? Please let me know what you think about this marijuana strain in the comments below.