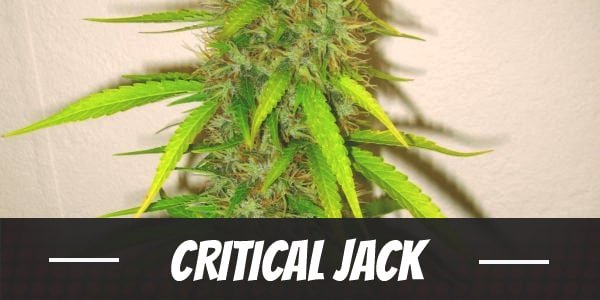 Of all the names one could pick for a cannabis, it has to be Jack. A pretty common name, but as far as Critical Jack goes, its name is symbolic. All this comes in the next section. Meanwhile, what can this balanced hybrid do?

As bred, Critical Jack has equal parts of its Sativa and Indica sides. But in some instances, one may be a little higher, in which case it will lean towards more on the Sativa side. From that alone, we know this weed delivers a great cerebral high. Even with an above average potency, this marijuana still leaves users clear headed.

Critical Jack is a cross between Critical Plus and Jack Herer, the latter named after the Emperor of Hemp.

For the uninitiated, Jack Herer is a pro-cannabis American activist. He is also the author of The Emperor Wears No Clothes, a book often cited by those espousing for the legal use of marijuana. In the cannabis community, Jack is called the Emperor of Hemp. In his honor, the Jack Herer strain was named after him.

Fittingly, Jack Herer strain not only gained prominence due to its name but also because of its quality. As a testament, it won the coveted overall prize in the 1994 High Times Cannabis Cup. A few years later, it would also bag the top prize as the best Sativa in the world.

So, when it comes to pedigree, Critical Jack has a lot to live up to. To the credit of the original breeder, it passed with flying colors as it has placed high in several competitions. The journey to fame culminated in the 2015 San Bernardino Hempcon Cup when it won the top prize.

A majority of the thousands of strains ever created have qualities that uplift the mood. In fact, that is what made it popular with recreational users. After all, one of the desires of people is to be happy. But most of these strains also comes with a downside such as leave one unable to do tasks.

On its onset, the same effect is delivered by Critical Jack in a gentle manner. Instead of the mind-numbing intense high, it gives a mellow buzz that not only uplifts the mood but also improves the ability to focus. It is in this way that Critical Jack sets itself apart from others.

It also gives an energy boost similar to that of drinking a cup or two of espresso. Combine that with improved focus and anything that needs to be done gets done.

One good thing about being a balanced hybrid is that its Indica properties blend in well with the Sativa side. As the effects continue to creep down to the body, not only is the user happy and productive but also relaxed. There are other strains that could do this, but many of them leave a person too lazy to move. Here, Critical Jack again shows why it is one of the best strains in the world, as it makes users more energetic.

The buds of Critical Jack may look ordinary, but its scent is anything but. It has a nice sweet piney smell with a blend of citrus or lemony floral fragrance. While its name may sound masculine, its scent is more feminine and appealing to most people.

Carrying over to its taste, there is an added peppery spicy hint that makes it smooth during inhalation and exhalation. It could be that Critical Jack is a victim of its own success when it comes to fragrance and flavors as it has not received recognition in these fields. Suffice to say, it has a taste that most people will find delightful.

Depending on the physical state and mood, as well as experience and tolerance levels, a few users have reported feeling dizzy with the use of Critical Jack. It is likely during the onset as the weed delivers its cerebral high and often lasts only a few seconds to minutes. Also noteworthy is that in rare instances, there are people who may experience increased anxiousness.

There are also other negative reactions that come with using marijuana. Using any type of cannabis often causes a person to experience dry eyes and mouth, as well as a possible mild headache. These are pretty much considered as normal and nothing to be worried about. Drinking a lot of water should minimize these concerns.

For decades, pro-cannabis activists had been calling on governments around the world to legalize marijuana. The top reasons cited are related to its medicinal use.

Critical Jack, for its ability to uplift the mood, is able to reduce stress. As a result, it is also useful for people who are suffering from depression. Because it gives a boost of energy, then it also follows that it helps in dealing with fatigue. To a certain degree, it could also aid in alleviating the symptoms of mild pains and aches.

An hour or so after using Critical Jack and towards the second hour, and especially as its effects start to wane, users are likely to feel hungry. Of course, it means that those who need help stimulating their appetite will find a good use for this strain.

Considered as an easy to grow marijuana, Critical Jack thrives both in an outdoor and indoor environment.

When cultivated outdoor, this plant could grow as tall as 10 feet. With this in mind, growers should also consider if it could be a problem living with other people in the neighborhood. At any rate, so as long as it is properly taken care of in a climate similar to the Mediterranean, then it should reward growers when its time to pick the buds.

Not everyone has the luxury of living in a house with an outdoor garden and that is why indoor gardening is becoming a thing. Critical Jack thrives well in these conditions as well, especially when using hydroponics. If so, then using the Screen of Green (ScrOG) method can aid in a more explosive growth. Of course, it has to be topped and kept shorter depending on the indoor space available.

There is a lot to love about Critical Jack. It has great effects with not much of a downside. It also has a pretty great scent and taste. Indoor growers should delight at the quick flowering stage that starts in as early as 8 weeks. Even better, it also produces a whopping 21 ounces per square meters that should fill up those empty jars quickly.

Cultivating Critical Jack outdoor is also a great option. Sometime between the end of September and the early days of October, each plant has a yield of over 40 ounces.

Have you ever smoked or grown your own Critical Jack? Please let me know what you think about this marijuana strain in the comments below.