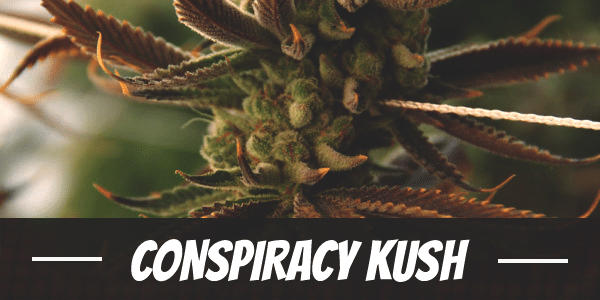 As strains and hybrids take their names from almost anything and anyone, one was bound to be Obama. The funny thing is that in the mind of someone with a ton of imagination, the former president must have been more discreet than Clinton. Bill may have had his you-know-what sucked inside the oval office, but Barrack was smart to do it elsewhere

It has now come to light that there might be an offspring as a result of that affair. At least, that is according to conspiracy theorists.

But is it all talk or is there proof?

Meanwhile, there is a very presidential-like hybrid called Conspiracy Kush that is making its mark in the cannabis world.

Rumor has it that Obama had an affair with his queen and they may have been meeting somewhere in space. If that is true, then that explains why no one ever caught them. Regardless, this is the facts that we have gathered.

Conspiracy Kush is a result of a cross between Obama Kush and Space Queen.

One of the great things about the Conspiracy Kush is the seamless blending of its effects. Instead of conspiring to send people to a spacey trip, it allows most users to remain functioning.

At its onset, the smaller Sativa side delivers a gentle mental high that makes users feel happy. For some people, the uplifting sensation may build up a euphoric feeling. At the same time, the mellow buzz also clears the mind allowing the users to have better mental cognition. Some may even find themselves deep in their thoughts.

Like most hybrids, its Indica side starts to make its presence felt as it creeps into the body. Unlike the Space Queen, it does not deliver an intense physical high. Instead, the effects are more subdued but continuous. As users feel relaxed, some remain active, while most have the tendency not to do anything.

Because it has a high slightly above average THC, there is a chance that using Conspiracy Kush to the limit may have a sedating effect. It becomes apparent when one overuses. In that situation, users and the couch become inseparable.

Conspiracy Kush has a pungent and peppery smell that comes with a hint of citrus. The fruity blend mixed in somehow works to create a unique but still distinct Kush scent.

In some ways, its peppery taste may help to make it smoother on the throat. It does have a weird tangy taste that some may even describe as like a skunk. For the uninitiated, cannabis that tastes like a skunk is not as horrible as it sounds. First-time users are often surprised at how well they like this taste. A lingering aftertaste of citrus and berry makes it more pleasant.

When it comes to adverse reactions, Conspiracy Kush is the same as other cannabis in that it causes dry mouth and eyes. There is nothing much to worry about it as these conditions are typical of its use.

In some instances, some people may feel a little dizzy. It usually occurs at the onset of its effects. Because of its above average potency, using a bit too much may also cause dizziness.

As enjoyable as its effects are for recreational cannabis users, Conspiracy Kush offers far more benefits to medical marijuana users.

It has a soft, but heavy hitting physical high helps in dampening the symptoms of pain. Conspiracy Kush also has enough sedative-property that helps in dealing with inflammation. The seamless combination of its mental and physical high also can significantly reduce stress.

One thing about using hybrids with a greater Indica side is that many of them cause users to feel sleepy. For that reason, users should avoid using it during the day when there are still things to do. But towards the end of the day, it is an ideal companion for sleeping. In fact, one of its bigger user bases are insomniacs who need help falling asleep.

Conspiracy Kush is not a complicated hybrid to grow. In fact, growers have the option of growing it outdoor, indoor, or in a greenhouse. One way to achieve its full potential is to cultivate it using hydroponics. It also grows well when using both the Sea of Green and the Screen of Green techniques.

This hybrid can have large thick buds, which means growers will want to support it. An interesting thing about growing Conspiracy Kush is that it can have up to five phenotypes. Although they all seem to have the same potency, they do come in different color hues from lilac to dark purple. To bring out these hues, growers expose the plants to colder than average temperature before flowering.

Regardless where one grows the plant, it does have a pungent scent. If privacy is an issue, then it is better to plant Conspiracy Kush hybrid indoor. By using a carbon-activated filter to remove its smell, then it should no longer be a problem.

On average, Conspiracy Kush needs around 8 to 9 weeks to mature indoor. We do not have an exact figure so at best, we can only estimate its yield. Under ideal conditions, the plant should have a yield in the range of 12 to 16 ounces per square meter.

Compared to other hybrids, Conspiracy Kush has a tad bit earlier flowering time. In most cases, it should yield at least 16 ounces per plant by the end of September or the first week of October.

Have you ever smoked or grown your own Conspiracy Kush? Please let me know what you think about this marijuana strain in the comments below.