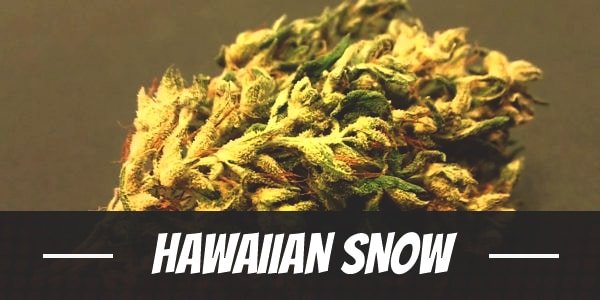 Every strain has its own credibility and reputation to build. However, there are so many aspects to look into when determining which particular strain is the best of the best. After all, each of them is intended to be as unique as possible.

Fortunately, the experts within the cannabis community can help marijuana users and enthusiasts decide which strains dominate the world of cannabis. More often than not, users will simply look into the list of award-winning strains and choose which variety they should try next.

Apparently, earning an award from a reputable organization that recognizes the performance and contributions of every noteworthy strain in the market is a big deal. Consequently, these award-winning strains earn the respect and admiration of every cannabis user.

On that note, let us get to know one of the most recognized cannabis variety in the market that has outperformed thousands of other strains. It is called the Hawaiian Snow, a Sativa-dominant strain renowned for its powerful cerebral high and impressive medicinal value.

Hawaiian Snow is a trifecta of various haze genetics. It is the strain child of Pure Haze, Neville’s Haze and Hawaiian Haze which are both Sativa strains. Ironically, Hawaiian Snow turned out to be a hybrid rather than a pure Sativa which is contrary to what other sources would suggest.

One of the things that make the Hawaiian Snow a highly sought-after strain is simply due to the fact that it offers an extremely potent head high that is distinctly overwhelming, but in a good way.

Apparently, in the case of Hawaiian Snow, the combination of a THC level that can reach as high as 23% and a Sativa content of 90% is not entirely as alarming as it initially looks. In fact, its overall high is more of a comforting experience that users find very enjoyable.

To wit, it offers a very stimulating head high that is generally uplifting in a way that leads users to feel happy and energetic. This makes the strain a perfect daytime treat during social interactions and other activities that require a heightened energy and incredible creativity.

On a side note, users must be careful as this head buzz intensifies because it may leave some users feeling a bit spaced-out.

The fragrance of Hawaiian Snow is perhaps one the freshest aroma that any cannabis user may encounter.

It has this delightful combination of spice and incense with hints of a fruity citrus and eucalyptus scents. Basically, its aroma is more like basking in the ambiance of a tropical pine forest.

Some users find the flavors of Hawaiian Snow to be a bit complex. While the sweet tropical pine and eucalyptus flavors are more evident at first, users will then taste a citrus undertone later on that is more like lemon grass as they exhale on its smoke.

Regardless of how respected and admired the Hawaiian Snow is, it still has the potential of causing a few adverse reactions among its loyal supporters.

The majority of these cases involve users experiencing dry mouth and dry eyes. There may also be a few instances where it can trigger anxiety attacks, especially to those users who are susceptible to the condition. Other mild cases may also involve dizziness and headache which are most likely due to the strong cerebral high of the strain,

Aside from its potency and distinct head buzz, Hawaiian Snow’s medicinal value is also one other thing that makes the strain very notable. This is reflected in the strain’s impressive CBD level that can reach up to 1.10% which is very rare and therefore, makes Hawaiian Snow really special.

Considering the stimulating and uplifting effects of Hawaiian Snow, it can actually be an effective stress-reliever and anti-depressant. Some sources identify a few other health conditions that may be addressed by the strain as well. These include ADHD and Bipolar Disorder.

On the other hand, the mild Indica effect of the strain may be helpful in relieving pain and encouraging drowsiness for insomniacs.

Hawaiian Snow is one of those strains that require some level of experience to grow. Its overall cultivation may need a great amount of patience, but the harvest can be very rewarding. It is not even just about the overall yield, but also the quality of the strain given that it has been properly cultivated.

Hawaiian Snow can be cultivated either indoor or outdoor. However, the former may require growers to place the strains individually in a growing medium filled with a nutrient-rich soil while the latter demands for a warm or sunny climate to ensure a successful cultivation.

Hawaiian Snow actually has a significantly longer flowering time that can last up to 14 weeks which is why it requires a bit more of persistence. But, the expected indoor yield is definitely worth the wait as it can reach up to 21 ounces per square meter.

The same is true for the strain’s outdoor cultivation. Growers can expect its flowering time to last until late October to early November. But, as soon as the strains are ready for harvest, the expected yield can reach up to an astounding 35 ounces per plant.

Have you ever smoked or grown your own Hawaiian Snow? Please let me know what you think about this marijuana strain in the comments below.