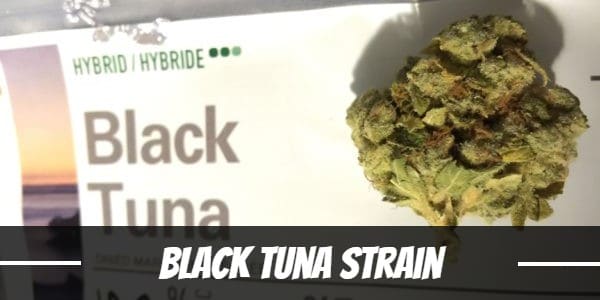 Underwater, a school of tuna is one of the most impressive sights divers can see. But for most people, it is seeing fresh tuna sashimi on their plates that make it even look more impressive. Not everyone may know the specific tuna they are eating, but there aredifferent kinds. Most common is the yellowfin tuna, and then there is the bluefin tuna sold at insane prices. The question is, have you heard of the elusive black tuna?

Unfortunately, we do not know much about this Black Tuna. If there is one thing we are sure of, then it is that it cannot be found underwater. Regardless, this is one potent hybrid weed that not only provides medical benefits but used excessively, may cause one to feel lazy.

In as much as sashimi may not be for everyone due to preference, Black Tuna is not for beginners due to its potency.

Black Tuna is a rare breed, figuratively and literally. No, they do not come from the ocean, but came into existence after a breeder crossed Herojuana and Lamb’s Bread. Ironically, it was named after a gang smuggling marijuana to the United States, but its purpose is for medical use. At least, that is the impression the breeder, 5 Star Organics, gave. Being so, this hybrid is meant to provide medical cannabis users a cannabis that is beneficial in pain relief.

Have you ever heard of a cannabis strain that is sold in tuna cans? Apparently, that is what the breeder, 5 Star Organics, did. So, regardless how one feels about the marketing gimmick, the fact remains that this is one potent strain.

Looking to buy seeds like Black Tuna? Check out our marijuana seed bank.

Like most cannabis, Black Tuna delivers a mental hit at the onset, causing one to feel uplifted. The turn in mood is a good thing, as one starts to feel happier, or even elated. Unlike some others, especially the heavy Sativa strains, the cerebral high is gentler rather than intense.

As the physical body high starts to take effect, this is when users feel their body relaxing. In other words, the cerebral high sets the tone, and the body manifests the wonderful effects of Black Tuna.

For some people, the absence of the sudden intense hit makes it easy for them to underestimate the potency of this hybrid. Keep in mind, if one smokes too much, the intensity of its effects could start to feel like narcotic, as well as keep the user glued to the bed or couch.

Go to a fish market and smell the air. Of course, it is not pleasant. The good news is that our Black Tuna strain smells nothing like that. This hybrid is pungent and skunky, but theearthy tone sort of makes it more tolerable.

It is safe to say that the Black Tuna is not going to win any awards in best tasting cannabis. But while its odor carries over to its taste, it also has a lingering herbal and woody taste. Simply, its taste should appeal to most consumers.

As mentioned, Black Tuna may not be for novice or beginners to using cannabis. Due to its high potency, it could overwhelm the uninitiated. One thing that needs to be mentioned is that even if most people find stress relief from using this strain, there are some who may experience the opposite. The reality is that there are some people who may be predisposed to panic attacks or anxieties. As such, using Black Tuna may elevate those levels. Even if it is rare, it is better to stay informed.

Now, what is almost sure to affect most people using this strain is the typical reaction to using weed. Dry mouth and eyes are the most common experiences, and there is pretty much nothing one could do other than to drink a lot of water, before and during its use.

So, as mentioned in the previous section, there are some who may feel elevated anxiety levels with the use of Black Tuna. But for the majority of medical cannabis users, the uplifting Sativa effects and the sedating body high helps in relaxation. With that, stress levels drop. Consequently, those who are dealing with depression should find this weed beneficial.

Looking to buy seeds like Black Tuna? Check out our marijuana seed bank.

But that is not what Black Tuna is sought after for. In fact, most medical cannabis users seek out this strain for its capability in helping them find relief from pain. For the legislators who still refuses to legalize marijuana, wait until they are suffering from some horrible disease and have to live with chronic pain, every second of the day.

Aside from helping with mental health and pain relief, one downside of using Black Tuna is that it causes a person to feel sleepy. Of course, that is not such a bad thing. In fact, insomniacs would find it especially useful.
Finally, as the effects start to subside, there are users who start to feel hungry. It means that anyone who needs help in stimulating their appetite may find Black Tuna helpful.

Download my free Grow Bible and grow your own Black Tuna!

We tried to find information on growing Black Tuna. Unfortunately, we failed to do that. From what we could gather, the breeder chose not to disclose those information. We are not even sure if there are seeds available, but we think not.

As mentioned, the breeder has chosen not to disclose any information regarding growing this strain. In all likelihood, the decision to withhold this is to protect their business.

Similar to the above, the breeder has also kept information on vegetative and flowering stages classified.

What is the Black Tuna strain yield?

How much THC does Black Tuna have?

What are the origins of the Black Tuna strain?

Have you ever smoked or grown your own Black Tuna? Please let me know what you think about this marijuana strain in the comments below.