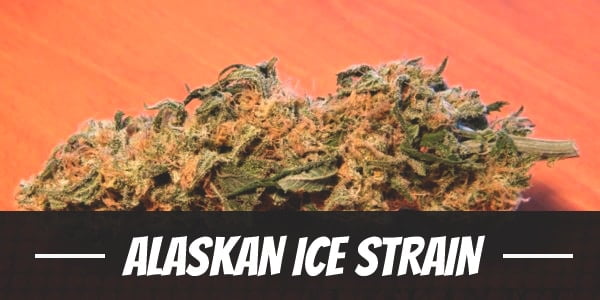 Alaska, without a doubt, is one of the most beautiful states in the USA.

It has some of the most scenic views amidst those mountains.

Ever wonder what it feels like to be on top of one?

Ice climbing in this state is one of the hardest things one can do, even for hardcore climbers.

But for the few who brave the challenging climb, reaching its peak must be exhilarating.

Lucky for us, we do not have to go to Alaska, let alone climb, to experience the thrill.

From the comforts of our home, all we need to do is enjoy the Alaskan Ice strain.

In moments, it delivers an intense euphoric feeling that is as thrilling.

One thing is for certain about Alaskan Ice. It did not come from the state.

In fact, it traces much of its lineage traces back to strains coming from Colombia, Mexico, Thailand, India, and Brazil.

Not one in its lineage originated from the USA.

Alaskan Ice comes with a pedigree. Both of its parents are not only highly regarded, but they are classics and legends, in their own rights.

Cannabis users should be familiar with White Widow.

Not only has it been around for over 20 years, but it is also one of the most popular strains in the world.

It is also a past winner of the High Times Cannabis Cup.

Haze, on the other hand, has been around for nearly 60 years.

It is notable for delivering an intense, energetic head high.

By using both the White Widow and Haze, the result is a powerful Sativa-dominant strain named Alaskan Ice.

Seasoned cannabis users know that strains are often named for their effects.

Since we know that the Alaskan Ice does not come from the state, it follows that it must imply a chilling effect.

Well, its far from it, as this strain ushers in an intense mental high with a boost in energy.

In no time at all, users feel not only uplifted but also elated.

It is for this reason that we compare it to climbers reaching summits after a tough climb.

Such feeling is liberating in the sense that all worries in the mind get obliterated.

Except for when using too much, most people remain clear headed.

Besides feeling happy, there is also a boost in creativity and motivation.

After a while, the mental high starts creeping down to the body.

As the effects blend in with the head high, users feel relaxed but remain energetic.

Despite its beautiful effects, Alaskan Ice is a very potent strain.

As such, it may not be the best strain for beginners.

Alaskan Ice comes with a spicy aroma that is reminiscent of peppers. It is also accompanied by a blend of earthy and nutty scent.

Most of its aroma carries over to its flavors, but the nutty taste is more pronounced.

In general, most users would describe its taste as delicious if not for the smoke being a little rough.

Using cannabis typically results in dry mouth and eyes and the Alaskan Ice is not any different.

But using a little too much will cause these symptoms to worsen.

In some instances, it is also possible for a few people to feel a little dizzy with the surge of mental high.

Also, it may cause some to feel more paranoid.

Avoiding the mentioned adverse reactions is easy. Do not use too much or beyond personal limits.

Alaskan Ice is one of the best Sativa-dominant hybrids one could get their hand on.

It’s incredible mental high is so potent that it can combat some health issues.

For instance, the uplifting effects causing a mood swing is useful in battling depression and stress.

As we all know, drinking a cup of double espresso provides us with a boost of energy.

Alaskan Ice does that too. Furthermore, it can help increase productivity because users tend to have not only a clear head, but also a heightened focus.

Because of the euphoric feeling, as well as a mild analgesic property, the strain brings other benefits to users.

Another widespread use of Alaskan Ice among medical cannabis users is for pain relief including headaches.

Alaskan Ice thrives well outdoor or indoor. And no, the strain will not grow in ice.

Instead, if planted in a warm environment, it is easy to understand why it was named after ice.

Once the buds are out, they will be covered by frosty looking resin.

Indoor, it should grow well using hydroponics. Instead of the Sea of Green technique, it is more adaptable to the Screen of Green.

One thing is for sure. Alaskan Ice is a vigorous producer. Like many Sativa-dominant strains, it will take around 9 to 10 weeks before flowering. And once it is time to harvest, those buds could be as much as 24 to 28 ounces per square meter.

If the plant could have a high yield indoor, it does even better outdoor. Once it is ready for harvest in the third to fourth week of October, each plant can produce 28 to 35 ounces of buds.

What is the Alaskan Ice strain yield?

How much THC does Alaskan Ice have?

What are the origins of the Alaskan Ice strain?