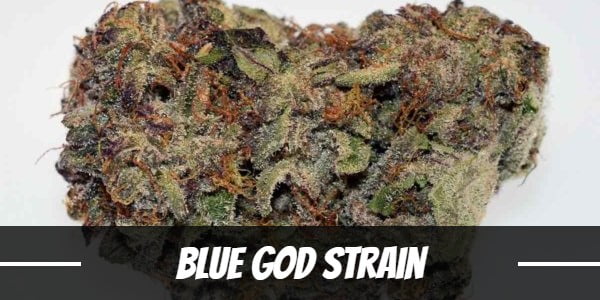 When invoking the Blue God, what comes to mind is the Hindu Deity Krishna, who is often depicted in blue. So, one has to wonder, why would a cannabis strain take its name from a deity?

Our theory is that its name is nothing more than combining the names of its parents. Even so, could there be a divine reason for this to happen?

Now, if one were to take a closer look at the deity and the reason for the blue color, then it becomes interesting. For instance, the blue aura of Krishna makes him irresistible. In many ways, the Blue God strain delivers effects that are as irresistible, too.

Not a lot of strains come with the same pedigree as Blue God does. Both of its parents are award-winning and regarded as among the best in the world. In fact, both were past winners of the prestigious High Times Cannabis Cup. God Bud, one of its parent, was the 2004 winner of the Indica section. Its other parent, Blueberry, was the overall best strain in 2000.

As a result of crossing these two highly-acclaimed strains, the Blue God Indica came to be. Although it has yet to match the accomplishments of its parents, it did place high in the 2002 Culture Toker’s Bowl.

Blue God is an Indica strain and as such, its effects are physical. Even so, it does deliver a mild mental high. One of such effects is feeling euphoric and in some cases, even a tingling sensation.

The mild mental high is soon taken over by a numbing physical high as it creeps into the body. Because of this, users feel a wave of relaxation washing over the body. In no time at all, most users also start to feel sleepy.

Blue God comes with divine powers so users should never underestimate its potency. Doing so leaves one overwhelmed, stoned, and in a couch-lock.

Looking to buy seeds like Blue God? Check out our marijuana seed bank.

This strain has a pungent odor. From its lineage, it has also taken the delightful scent of its parents. As such, its earthy scent comes with the sweet fruity smell of blueberry and an herbal undertone.

A great smelling strain must come with great tastes. Not all strains do, but Blue God does. A sweet and fruity blueberry taste dominates and makes it delicious to the taste buds of users.

Never piss off the gods or they could cast lightning to strike the offenders. Fortunately, Blue God is one of the nicest deities around so it does not come with much concerns on negative reactions. It does cause users to experience dry mouth and eyes.

As for other concerns, there are a few including dizziness and headaches, as well as feeling a little more paranoid. In most cases, these reactions are a result of overusing or using beyond one’s own tolerance level. Blue God is a potent strain and novice users may want to start off with another strain or use this one in small amounts each time.

Besides giving recreational users the most relaxing experience, this strain is also beneficial to medical marijuana users. One of the top reasons for its use is in helping patients reduce the symptoms of pains and aches. Feeling relaxed, it also follows that it helps in reducing stress.

Feeling completely relaxed and stress-free, users at this point becomes conducive to sleeping. For this reason, Insomniacs would appreciate its ability to induce sleepiness.

There are also reports where some users feel hungry. On one hand, it does seem to help those who need help with stimulating their appetite. But on the other hand, it seems like it is going to be a struggle to get up and find food, not after one is feeling nice and comfy with the couch or the bed.

Download my free Grow Bible and grow your own Blue God!

Having the choice of growing marijuana is good. Even better is to get going and planting one or two. Like many cannabis strains, Blue God thrives well in both an outdoor or indoor environment, using soil or hydroponics. Of course, we recommend using hydroponics to reduce flowering time. At any rate, even if planted outdoor, it prefers a Mediterranean-like climate or warmer.

Blue God has large dense buds which can take on more purple hues as it matures. A good way to induce the purple hue is to move the plant to a cooler environment just before it starts its flowering stage. As for experience, this strain is considered easy to grow, so it can be the perfect cannabis for first-timers in planting marijuana.

Blue God promises an abundant yield per square meter so as long as it is taken care of well. Like a typical Indica, it has a short flowering time that could be as early as 8 weeks. By then, picking around 14 to 18 ounces is a great reward for weeks of nurturing.

As for growing it outdoor, keep in mind Blue God can reach up to 12 feet. Assuming that is not a problem, then it should be ready for harvest on the first couple of weeks of October. It is possible that each plant could yield at least 18 ounces.

What is the Blue God strain yield?

How much THC does Blue God have?

What are the origins of the Blue God strain?

Have you ever smoked or grown your own Blue God? Please let me know what you think about this marijuana strain in the comments below.