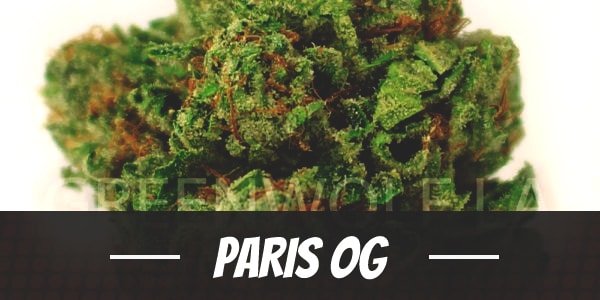 Cannabis has gained the attention of many, not only for their physical and cerebral effects but also for their contribution to medicine. Although the use of marijuana is not to be regarded as a treatment for specific health conditions, it is still considered to be helpful enough in relieving the symptoms of some illnesses one way or another.

For that, growing cannabis in the most efficient way possible has never been more essential. In fact, growers are competing against each other not just for their individual businesses, but also as an attempt to prove themselves worthy of the entire cannabis community’s respect.

Speaking of competition, there are several cannabis strains in the market that are lucky enough to receive quite a hefty amount of recognition for their quality. One example is the Paris OG strain. This strain has gained several accolades from numerous Cannabis Cups in different places.

That being said, Paris OG is definitely an award-winning strain that anyone would easily want to try to get their hands on. Here is some information about the Paris OG that will prove that point.

Paris OG is a cross between two hybrid strains: the Headband and the Lemon OG Kush. It is said to have originated from Southern California where it is made available in at least one of their medical marijuana dispensaries.

While it can be a lot easier to obtain the strain from one particular clinic, it is still regarded as a rare medical strain in many places. This could also be due to the fact that the use of marijuana for any medical purposes is not yet legally practiced in most countries.

The effects of the Paris OG is not nearly as overpowering as other types of strains. Nonetheless, both its cerebral and physical high are just as effective enough to give you a satisfying experience.

At the onset, the less dominant Sativa side starts working its magic by uplifting the mood resulting in feeling good and happy. For some people, they might even feel euphoric. In a social gathering, using Paris OG moderately makes could bring out the laughter.

Soon enough, its 75% Indica-dominant side starts to manifest itself. As the physical body high creeps in, one is bound to feel the body relaxing. For that reason, Paris OG is a great strain to use on a lazy day when there is nothing else to do.

One of the effects of using this strain is that consumers tend to feel sleepy. As such, it makes Paris OG a good strain to use in the evening an hour or so before sleeping.

Paris OG has an earthy odor infused with the smell of diesel. Hardcore cannabis users should find the blend of pinewood pleasant.

The aroma of Paris OG carries over to its taste, but it is more subdued with a hint of flowers and pine that most users find delightful to the taste buds.

One of the most common reactions users would experience with the use of Paris OG is dry mouth. Furthermore, this strain might also cause one to feel dry eyes.

Other than that, there is nothing to be concerned about. However, on rare instances, it is also possible for one to experience a mild elevation of anxiety and paranoia if one were to smoke too much.

For novice users, there is also a slight chance that one might experience mild dizziness.

With a low CBD level, Paris OG does not meet the needs of epileptics and anyone suffering from seizures. However, this strain still has its other benefits for medical cannabis users. For instance, the most popular use of this strain is to reduce stress. For some others, it might also be used to help deal with depression.

Because Paris OG causes most consumers to feel hungry, those who have trouble sleeping should find this strain beneficial as it causes drowsiness.

Beginners might not want to grow Paris OG as their first strain as it requires a bit of experience. Even so, it should still be manageable for those who are willing to put in the time to learn.

It could be grown outdoor, but it thrives better indoor using soil or hydroponics. While there is not much information on growing available, it is safe to assume that this cannabis would grow well in a temperate to warm climate.

Cultivating the strain indoor, the average flowering time is around 8 to 9 weeks. After which, harvesting should have a yield of 12 to 16 ounces per square meter.

When grown in an outdoor setting, we learned from bits and pieces of information that the Paris OG hybrid should be ready for harvest during the middle part of October towards the last week. Our educated guess is that one could harvest possibly around 20 ounces or even more per plant.

Have you ever smoked or grown your own Paris OG? Please let me know what you think about this marijuana strain in the comments below.