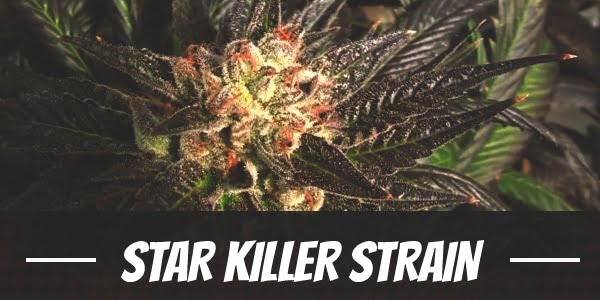 Talking about strains that come with star power, then Star Killer is among the first which comes to mind. In theory, the only way for a star to die is to run out of combustible gas. In other words, stars die when they burn themselves out. If we are the gas that keeps burning, then a great way to put out the fire is to use the Star Killer strain.

Possessing a whopping THC level in the range of 26% to 29%, the Star Killer is not one to mess around with. This heavy hitting 70% Indica strain has to power to put a stop to our hyperactivity and slow us down. In some cases, it can shut us down for the rest of the day. As gloomy as it sounds, that is the effect it has in delivering the experience of an ultimate relaxation.

From what we have learned, the Star Killer is a two-way cross between Skywalker OG and Rare Dankness #2. Of the two strains, many cannabis users are familiar with Skywalker OG. It is one of the popular heavy hitting Indica-dominant strains in the world. But its other parent, the Rare Dankness #2, we do not know much about it. In some ways, its mysterious origin seems to have increased the hype about Star Killer.

The strain, also spelled as Starkiller, has also created a name for itself since it came into being. As a testament to its quality and potency, it has won several awards. Some of them are:

We are confident that we have not seen the last of the Star Killer in competitions. In fact, it is possible for the strain to continue its dominance over its field in the coming years.

The Star Killer strain is unlike many other strains. Even when compared to others with 70% Indica, its effects are different. Although they can be similar at the onset where users feel uplifted and happier, that is where the similarity ends. Instead of the mental high intensifying to induce euphoria, users of this strain feel hazy as a result of its heavy stoney effects.

As the buzzing mental head high creeps down to the body, users finally succumb to the numbing physical high it brings. It is almost guaranteed that users are going to stay on their couches or beds due to its sedative effects. Because of that, it is not uncommon for users to fall into a deep sleep.

Star Killer has a pungent scent of pine and lemon. In the case of cannabis, the pine scent may not be extraordinary, but the blend of lemon does make it pleasant.

While its scent seems to be straightforward, the Star Killers taste is another story. It has a pungent and skunky taste that can make some people raise their eyebrows, but it is also the unique blend of lemon and pine along with an earthy taste that gives it an unusual flavor. Most people find its taste pleasant enough and the spicy hint that accompanies its smoke seems to make it smoother.

The crippling effects of Star Killer work well for those who want to use a strain at the end of the day. But due to its incredibly high potency, it also comes with more pronounced negative reactions. Almost all users of this strain are bound to experience dry mouth and eyes. In both cases, they are considered normal with the use of any marijuana strain.

At the same time, this is also a tough strain to handle. For instance, there are more than a few people who will likely feel more paranoid. Some are likely to also feel an elevated level of anxiousness. Thus, the Star Killer is not a great strain for beginners who are better off using another strain. Also, people who are predisposed to paranoia or anxiety may want to avoid this strain as well.

For recreational users, the use of Star Killer is for one reason only. At the end of a long day and especially in the evening, this strain can help users relax and sleep. It is certainly not the right strain to use if the purpose is to be more active, to have a clear head and better ability to focus.

As stated, it has sedative properties that can put one to bed. It is also for this reason why it is one of the top strains for medical cannabis users. Its numbing effects are helpful in dealing with inflammation, as such it is great for pain-relief. The intense high it delivers takes the mind away from pain and the sedative effects leave users sleeping peacefully.

In as far as using the strain for mental health disorders, it can help reduce stress or make managing depression easier. But at the same time, users should also note that it can also increase anxiety rather than reducing it.

Unfortunately, we do not have any information on the specifics of growing Star Killer. It does appear that the plant should thrive in a Mediterranean-like climate as most others do. Furthermore, we think it should grow well both outdoor and indoor.

From what we could gather, it seems that the Star Killer strain is capable of producing around 12 to 16 ounces per square meter in an indoor garden. It does have a longer flowering time than the average as it needs around 9 to 10 weeks for it to reach maturity.

Our best estimate at this time is that this strain should be ready for harvest by the end of October. Due to lack of information, we can only estimate its yield per plant at around 16 ounces each.

What is the Star Killer strain yield?

How much THC does Star Killer have?

What are the origins of the Star Killer strain?

Star Killer was created from a mix between Skywalker OG and Rare Dankness #2.

Have you ever smoked or grown your own Star Killer? Please let me know what you think about this marijuana strain in the comments below.