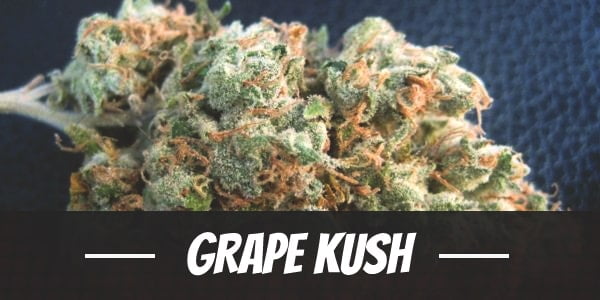 From an artists’ perspective, creations are their impressions of ideas and beliefs. Although some are figments of imaginations, it may also come with a hidden message that is in relation to their versions of truths. In some ways, the same can be said of strains. In this case, the artists are the growers and especially the breeders.

It is as if there are new strains being introduced every week. No one knows exactly how many strains are out there. Before one could finish an accounting of all available strains, there are more new ones. This is the state of the marijuana industry, one that is thriving and will continue to do so.

One of the strains that came out, which we are featuring in this post, is Grape Kush. It is a slightly Sativa-dominant hybrid that promises to uplifts moods and mental high while keeping smokers clear-headed.

The story of Grape Kush is not much different from other hybrids in the world of marijuana strains. Breeders are motivated by different reasons, among them is commercial. Of course, many of them are doing so for the money. But it should also be pointed out that these are people who are passionate with cannabis, and they are the sports superstars of this industry – the ones who earn while doing something they love.

Inspired by some of the great strains in the past, they wanted to take the finer qualities of a couple of strains. It is not known how long it took, but some strains take decades to develop. By crossing Pre-98 Bubba Kush and Romulan Grapefruit, a new hybrid with dense round nugs was created. It also looks amazing too with its dark green colors with some purple hues.

In boxing, a popular boxer who has gained international acclaim is the little fighter from the Philippines – Manny Pacquiao. From much lighter weight divisions in his younger days, he has moved up to heavier divisions. According to his opponents in the latter years, his punches do not hurt them, but they come in a flurry and stings.

In a similar way, Grape Kush is not the heavy hitter that could literally knock out users with its out-of-this-world potency. Far from it, this hybrid delivers a cerebral high that starts with a gentle rush that makes one feel good. As it continues to uplift one’s mood, a sense of happiness now starts to flood the mind. As the gentle buzz continues, one is bound to feel euphoric, and it is not surprising to see people using this hybrid end up being highly sociable with lots of laughter. Like the Filipino fighter’s punches, the effects of this hybrid is relentless and while it is not going to knock one out, it is highly potent.

As a follow-up to the mental high, its effects also creep down to the body giving the user a feeling of relaxation. It does have a mild sedative-like property, and so even with a clear head, users feel too relaxed to move.

One of the traits that the breeder wanted was the smell of grape, and that is what they did. Grape Kush, from the name itself, tells us that it has a prominent sweet fruity grape scent infused into its earthy odor. For sure, this is one of the better smelling strains out there.

Having successfully infused the smell of grapes, the original breeder also made sure that the version they released has to taste even better. As is to be expected, a strong flavor of grape is present in its taste. One of the striking things noticed by users is the smoothness during inhalation and exhalation of the smoke. Add to that the great flavor and what you have now is a delightful treat.

It is not easy to handle Grape Kush. In fact, because of its potency, and especially a few adverse reactions, new users should stay away from this strain. As cannabis users know, it is common to experience dry eyes and mouth with the use of marijuana. Using Grape Kush is no exemption. These are more nuisances and the best one can do is to keep hydrated.

Where there is a concern is in Grape Kush being known for raising the level of anxiousness. To a lesser extent, it is also known for increasing paranoia and causing headaches. For experienced marijuana users, it is best to try out only a small amount of this strain. If in case the negative reactions manifest, then this is not the right strain for you.

Because no two people are exactly alike, there is a small percentage of people who could not use Grape Kush. But for most who can, then they will benefit from its medicinal values. As everyone now knows, one of the strongest justification for legalizing marijuana, one that several states already have, is that cannabis can help people with certain conditions.

For instance, Grape Kush can help alleviate the symptoms of pain, reduce stress and aid in managing depression. Add to these benefits its effects of inducing hunger, or one could look at it as stimulating appetite. Finally, smokers of this hybrid are likely to find themselves sleeping before its effects are completely gone. No doubt, this is of benefit to people who need help to fall asleep.

Grape Kush can be grown outdoor and indoor, that’s the good news. Unfortunately, in as far as growing this plant is concerned, we could not find much information.

Indoor growers can start rejoicing in as little as 8 weeks because that is when they can get their hands of a yield per square meter of around 14 ounces.

The estimate on when Grape Kush is ready for picking would fall in the last days of September and within the first two weeks of October. By then, it should give growers some 14 ounces or more per plant.

Have you ever smoked or grown your own Grape Kush? Please let me know what you think about this marijuana strain in the comments below.