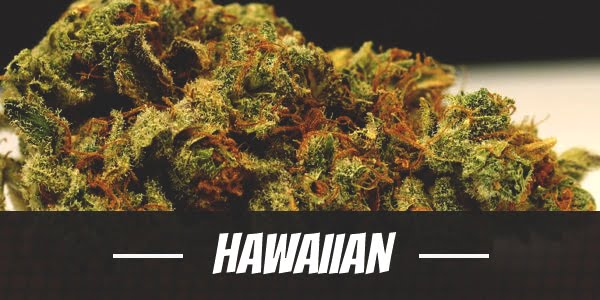 Anyone who lives in a landlocked country would, no doubt, think of beaches and water sports whenever coming across Hawaii. And then there are the hula dancers welcoming guests with DzAloha.dz For many, visiting the island remains a dream. But the good thing is that this dream can be made true, every single day.

For obvious reasons, our analogy to Hawaii is based on the name of the featured mostly Sativa strain known as Hawaiian. As for the reference to having fun, that is true and that is what this strain can do.

As one of the more popular Sativa dominant hybrids, it is given that users would experience cerebral highs associated with such strains. About the only questions that remain would include how potent it is and what kind of high can users expect

Of course, the real Hawaii has an origin dating back to the Big Bang. As for the Hawaiian Sativa, not much is known. As a matter of fact, no one knows its exact genetic lineage. One thing that is assumed as true is that it originated from Hawaii – hence, its name. In a sense, it is aptly named because after using it, one is bound to say Aloha to the amazing experience that it delivers.

Imagine visiting the island of Hawaii for the first time. After traveling a long way, you find yourself standing on the beach ready to plunge in. In some ways, that kind of excitement is what happens before a cannabis connoisseur smokes the Hawaiian. It is that anticipation of what is to come that adds to the excitement.

True to expectations, the onset of Hawaiian can lift one’s mood and bring joyful thoughts. As a result, users feel sociable and even talkative. But that is not what Hawaiian can only do. Furthermore, it also gives smokers a boost in energy.
Here is the interesting part about using Hawaiian. The cerebral high it delivers is not one that leaves one confused or psychedelic. Far from it, users feel clear headed and what seemed like difficult tasks becomes manageable. Add to that the energy boost and the result are finishing tasks quicker and in a more efficient manner.

Keep in mind, though, that Hawaiian is a difficult strain to use for some people, that is. As it delivers all the wonderful effects, it may also deliver unwanted reactions for a few people.

Look at the images and artworks relating to Hawaii and what tropical fruit is commonly seen? And so, it comes as no surprise that the Hawaiian would have an undertone of pineapple in its mostly sweet citrusy odor. Not that it is outstanding, but the smell of tropical fruits is pleasant for most people.

Hawaiian is one of those strains that have a great odor but tastes better. Most people find smoking this Sativa smooth both ways, during inhalation and exhalation. Making for a great experience is the sweet citrusy taste with strong hints of pineapple. In fact, this hybrid is as tropical as a strain could get with regards to taste.

As mentioned, Hawaiian is a difficult strain to use. Besides being potent, it also comes with some unwanted reactions.

First, let us get the basics out of the way. Using weed can cause dry mouth and eyes, and the Hawaiian is no exemption to that. Such is the reality of using marijuana and something users will have to get used to. Also, those who are not accustomed to using a potent cannabis may also experience moments of dizziness, mostly at the onset of the cerebral high.

Now, going to the unwanted reactions. The use of marijuana is often associated with uplifting mood and feeling happy. But there are some people who do not respond in the same way. While most people who use Hawaiian do experience its positive effects, there are those who experience otherwise.

As reported, there are people who may experience heightened paranoia, as well as increased anxiety levels. For this reason, it is best to try out Hawaiian in small amounts first. As for novice or beginners, it is better to use other gentler strains.

Despite the possible negative reactions, Hawaiian comes with benefits for medical marijuana users. Among the top or most popular use of this strain is in pain relief. It has anti-inflammatory properties which result in relief from the harsh symptoms of some illnesses.

Because of the positive feelings induced by this Sativa, most users also benefit from reduced stress levels. In a small way, its ability to uplift mood and reduce stress levels also contributes to dealing with depression.

Unfortunately, we could not find references on the web. The little that we know is that it takes longer than average to cultivate the Hawaiian. Such is not surprising as it is a mostly Sativa strain. Also notable is that it does not seem to provide an abundant yield. Maybe a part of its charm is in the difficulty in growing and getting only a small quantity after more than two months of cultivation.

While Indica strains would have a shorter flowering time of around 7 to 8 weeks, Hawaiian takes a longer time beginning at 10 weeks. After which, the expected yield per square meter is around 4 to 8 ounces.

When cultivated in an open area and allowed to grow to a full height of 8 feet, the average yield per plant is around 8 ounces. Flowering time should fall in the last days of October.