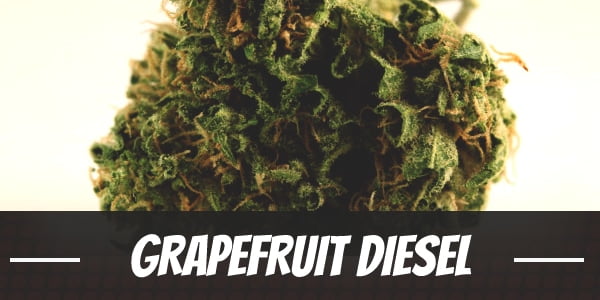 So, what do we mean by that?

Grapefruit Diesel has a higher Indica side, but it has a more pronounced Sativa effects. As such, it delivers an intense but liberating mental high that makes users feel good. At the same time, it does so without narcotic-like effects. As a result, people using this strain becomes clear headed and motivated.

As soon as we took a look at its genetic lineage, it became evident where it took its name from – Grapefruit and NYC Diesel.

Grapefruit is notable for its stress-relieving Sativa effects. Of course, it took its name because of the similarity in scent with the real fruit.

NYC Diesel, meanwhile, is a legendary strain that breeders have used in breeding. In fact, it has won the High Time Cannabis Cup several times in the past. It is also known as the ideal strain for parties and social gatherings. As its name suggests, it has a strong scent of fuel.

From these two strains, a new hybrid came to exist. If one were to write a book about each of those strains, then the summary would be Grapefruit Diesel. In other words, it inherited some of the best traits of its parents for the benefit of consumers.

One thing to note is that Grapefruit Diesel is hard to obtain. In fact, we are not even sure if there are seeds still available.

Before getting on with how the Grapefruit Diesel strain works, let us take a look at potencies. As a general rule, we describe as very potent any strain that has 20% THC content or more. At the same time, we also notice that most strains that are available in the market have high THC levels. As such, the best way we could describe this strain’s potency is greater than average. Having said that, consumers must always use cannabis well within limits.

So, Grapefruit Diesel starts quick. In no time at all after using, most users start to feel a mellow buzz in their heads. It continues to intensify and bring users to a heightened focus. Soon, they start to feel well and happy with most ending up feeling elated. Furthermore, From NYC Diesel it inherited a trait that makes people more talkative. For that reason, the strain is ideal for parties and social gatherings.

For people who want to propose but gets tongue-tied, they can use this hybrid. As for people with dark secrets, remember, this strain makes users talkative. Humor aside, Grapefruit Diesel settles down as its Indica side works its way to the body. As such, they feel relaxed while remaining in an upbeat mood.

Grapefruit Diesel comes with the same sweet and sour smell of grapefruit its parent with the same name. At the same time, it also comes with a strong tone of fuel, which it inherited from NYC Diesel. Both scents blend in well with each other to provide a pleasant aroma.

The smell of fuel is less distinct as it carries over to its taste. Instead, the mix of sweet and citrusy taste with grapefruit lingers on the taste buds and its smoke. It is in this regard that people who have tried using Grapefruit Diesel favor this one over other strains with similar traits.

Because it is gentle, some people tend to underestimate its potency. As such, they use a little more than they thought they could handle. Because of that, some of the negative reactions become more pronounced.

Even so, these adverse effects are nothing new with the use of marijuana. Among some notable reactions are dry mouth and eyes. Other reactions include dizziness, increased anxiety or feeling paranoid.

Even if it seems like its Sativa effects are more pronounced, and it is, remember that this strain has a higher Indica side. As such, it brings with it traits that are beneficial to medical users.

For instance, it has an analgesic like property that helps with muscle spasms and inflammation. As a result, it is effective in pain relief, which is beneficial to those with chronic pains and aches. In a sense, this is one reason why cannabis activist had been pushing for the legalization of marijuana. Often, they cite people with terminal illnesses who are suffering from pain, every second of the day. Cannabis can help ease away those pains and at the same time, uplift the spirit of the patient.

Speaking of uplifting the spirit, one of the top medical benefits of this strain is to reduce stress. It is for that reason that its use becomes helpful for other cases such as depression and anxiety.

There is not much information about cultivating Grapefruit Diesel. About the only thing that we could gather was that it grows more like an Indica. As such, we know it has a shorter flowering time. Also, it does not grow tall and tends to be bushier with dark green buds covered by amber colored hair and sticky resins.

It is safe to say that this plant should thrive well inside the house or outside in the garden. Of course, in outdoor, that assumes it is legal where it is planted.

For most Indica dominant plants, the average flowering time indoor is 8 to 9 weeks. Of course, there is a chance that it could be earlier by a week if growers opt for hydroponics. It appears, too, that its yield per square meter will range in 12 to 16 ounces.

Some sources say the Grapefruit Diesel will be ready for harvest in the early days of October. Each of the short bushy plants should have a yield of at least 16 ounces.

What is the Grapefruit Diesel strain yield?

Grapefruit Diesel yields 12 to 16 ounces per square meter indoors and 16 ounces or more per plant outdoors.

How much THC does Grapefruit Diesel have?

What are the origins of the Grapefruit Diesel strain?

Grapefruit Diesel was created from a cross between Grapefruit and NYC Diesel strains.

Have you ever smoked or grown your own Grapefruit Diesel? Please let me know what you think about this marijuana strain in the comments below.