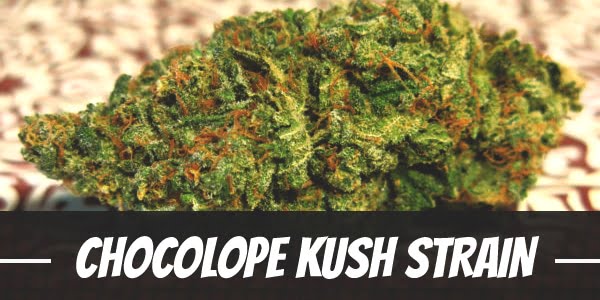 Learning about strains is as fascinating as it is using them. While it is understandable for novice users to not care as much as regular users, sooner or later, they will. With so many different strains available in the market, and these are only a small part of all the strains ever created, it is inevitable. At the end of the day, users want to have a few strains for use on different occasions or moods.

One strain, in particular, that has caught the attention of the marijuana industry is Kosher Kush. For years, this strain has ranked among the top ten in cannabis competitions. At one time, it was the seventh strongest strain worldwide. By breeding it with another strain, there is a lot to expect from its offspring.

Such is the royalty-like lineage of Chocolope Kush, a strain also known as Chocolate Kush. Both in fragrance and flavors, this hybrid is a winner, but will it measure up to its lineage with regards to its potency?

Looking at Chocolope Kush, one cannot help but fall in love with the dark buds covered white crystals. Setting aside aesthetics, what is it with this hybrid that makes it a great choice for most recreational, as well as medical cannabis users?

Chocolope Kush takes its name from its parents. As mentioned, one of them is the highly-acclaimed Kosher Kush. Its other parent, Chocolope, is where it takes it chocolate odor and taste, as well as its Sativa side.

Both Chocolope and Kosher Kush were bred by DNA Genetics. By crossing these two strains, they were able to produce a new hybrid that takes the best qualities of its parents. As a result, Chocolope Kush has given countless users around the world something to be happy about – figuratively and literally.

It’s hard to talk about the effects of Chocolope Kush without mentioning its fragrance and flavors. Yes, it is that great. Even so, this hybrid also provides the kind of high that is more easygoing rather than the intense hits of others.

Like most hybrids, its effects creep in beginning with its Sativa side. A few puffs and smokers start to feel uplifted. From this point on, the intensity of its effect continues to build up as it now causes one to feel happy, or even euphoric. Rather than mindlessly jumping up and down, the creative juices in the brain start flowing.

With that, the strain now becomes beneficial to doing certain tasks, especially in the areas of creation. But as mentioned, this is an Indica-dominant strain and as such, the physical body high soon follows. As the manifestations of the cerebral high balances with the body high, consumers of this hybrid now feel relaxed but not to the point of being rendered immobile.

Who does not love the smell of chocolate? Smelling Chocolope Kush, its pungent odor is unmistakably a mix of kush and other earthy odors, but what makes it such as delight is the addition of chocolate.

As great as it smells, it tastes even better. Most of its odor carries over to its taste, but this time, a hint of pine and nuts are thrown in as well. The result is that Chocolope Kush is one of the best-tasting cannabis anyone could get a hold of.

Although dry eyes are to be expected, what smokers of this weed are likely to experience is dry mouth. As such, it is important to stay hydrated before and during its use. Even better, keep drinking water in the hours that follow.

On some occasions, Chocolope Kush is known to cause dizziness. Usually, when this occurs, it is because the smoker is new to using cannabis. Other than what was mentioned, there is pretty much nothing major to be concerned about.

There is a reason why there is a move to legalize the use of marijuana in many countries today. Its medicinal benefits are not myths, but facts. For instance, medical cannabis users seeking to unwind and reduce stress and tension could use this weed to do so. Even those who have mental health issues to deal with would find the use of this hybrid beneficial.

One interesting thing about Chocolope Kush is that it seems to have anti-inflammatory properties. For that reason, patients with illnesses who are suffering from pain could find relief with its use.

Not much information could be had on cultivating Chocolope Kush. Suffice to say, based on its genetics, the plant should thrive well in an environment where it is warm with lots of sunlight. Of course, that is not a concern when growing inside a grow tent inside the house. Rather than growing using soil medium, it is better to grow the plant using hydroponics.

Compared to many other strains, Chocolope Kush grows faster than average. Even better, how does 17 to 21 ounces per square meter harvest sound to you? All that in as little as 7 weeks.

Growing the plant outdoor, it should be ready for harvest by the last week of September towards the first week of October. As mentioned, it is better to grow Chocolope Kush indoor as its outdoor yield is not that much better with an estimated 14 to 23 ounces per plant.

What is the Chocolope Kush strain yield?

How much THC does Chocolope Kush have?

What are the origins of the Chocolope Kush strain?

Chocolope Kush was created from a mix between Chocolope and Kosher Kush.

Have you ever smoked or grown your own Chocolope Kush? Please let me know what you think about this marijuana strain in the comments below.