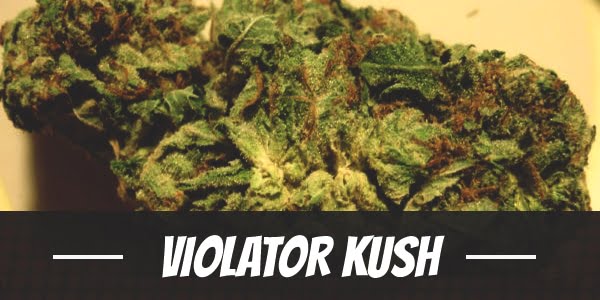 Sometimes, all a person need is to take a day off, literally. And that means not doing anything but to sit down and the time pass by. For most people, if only there is time to spare, they would gladly use is to recharge their tired minds and bodies. But there are also people out there who do have the time but could not simply bring themselves to relax.

This is where Violator Kush comes in. Does the name of this strain suggest this is one mean cannabis? In terms of potency, it is definitely above average with THC levels having been measured at up to 24%. Being a predominantly Indica strain, recreational users find this cannabis more than capable of inducing a physical body high.

But that is not the only thing that is remarkable about Violator Kush. It also has an impressive CBD level averaging around 1.5%, which makes it a highly sought after strain by medical cannabis users.

Violator Kush traces its lineage from Malana, a strain named after the place in India where premium quality cannabis is grown for use as a component of the famed Malana Cream hashish.

Its other parent is named after the place where it originated from, the mountainous region between Pakistan and Afghanistan, Hindu Kush. We have to wonder if the tough sounding name, Violator Kush, has anything to do with the harsh conditions of the mountains.

Once you start using the Violator Kush, it would not be long until its sedative property creeps into the body. For most people, the onset is described as a relaxing body calm that makes one feel lazy. But as mentioned, this is a powerful strain and soon after, the physical body high starts to intensify. Used in small amounts, it starts to uplift your mood and perhaps even induce creative thinking. At this point, you simply feel pleased. But the biggest effect of the Violator Kush is in how it calms down the body, causes the muscles to relax, which allows for the user to be in a complete state of relaxation.

This is one powerful strain that is definitely not recommended for new users or those with low tolerance levels. Users who overused reports that their eyelids feeling heavy with red eyes, and at the same time, leaving them on a couch-lock.

Violator Kush has a pungent smell with a blend of a musty and earthy odor of hash that you should find pleasant, even for those who love fruity or tropical smells.

The fragrance of this strain carries over to its taste with a hint of pine woods and undertone of pepper. Violator Kush is one strain that most cannabis users should find to have a delightful flavor.

A couple of negative reactions of using Violator Kush, dry mouth, and dry eyes, are pretty much what you might expect from using cannabis. Almost, if not all cannabis causes one or both. But there are other reactions that you should be mindful of, and usually, these are the result of using too much. Some might feel dizzy, and on rare occasions, might feel a headache. There are also cases where a person did not realize the potency of this strain, and as the powerful effects kick in, they get caught off guard which makes them experience a momentary bout of panic.

While recreational users find the Violator Kush a great strain to use to pass time, medical cannabis users appreciate the high CBD levels of this strain. At 1.5% to 2%, this is a potent medical cannabis that can help users relieve the symptoms of chronic pains and aches. Aside from pain relief, another use of this strain is in managing stress levels, which makes it easier to deal with anxiety issues including depression, PTSD, and others.

A couple of other effects of this strain an hour or so, especially as its effects begin to wane, is in stimulation the appetite and making the user feel tired and sleepy. Both of these are exceptionally useful to those who lack a good appetite and those who have trouble falling asleep such as insomniacs.

Violator Kush may be a potent strain but this cannabis plant is short and rarely even reaches 2 feet in height. It is a bushy plant with large dark green leaves with brown to orange hairs covering the long and dense buds. The buds are heavy hence growers would need to support the branches. This plant could be grown outdoor, as well as indoor.

Because of its lineage that is grown in mountainous regions, Violator Kush is suitable for cultivation in a cooler climate

This cannabis plant should thrive well in both soil and hydroponics. It is also adaptable to the Screen of Green (ScrOG) method. In 8 to 9 weeks, you should have a yield of 16 to 18 ounces per square meter.

Start growing Violator Kush some 8 to 9 weeks before the estimated harvest time sometime in the middle of September and by the time you harvest, the estimated yield could be anywhere from 22 ounces per plant to possibly more.

Have you ever smoked or grown your own Violator Kush? Please let me know what you think about this marijuana strain in the comments below.