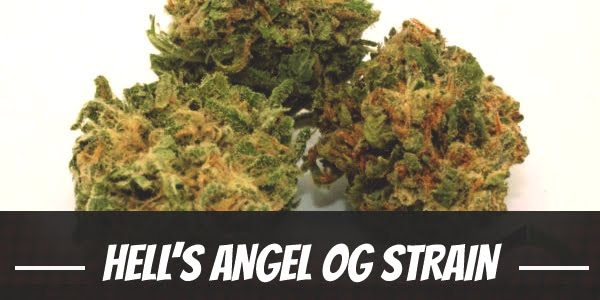 To say that the Hell’s Angel OG is a pretty intense hybrid is an understatement. In fact, it is a heavy hitting Indica strain that may lead to a couch-lock. Even so, it is what it delivers that makes it a sought-after strain.

Hell’s Angel OG is a great strain to use when hanging out with friends doing nothing. But for medical cannabis users, it offers far more benefits.

An infamous motorcycle gang in the United States, Hell’s Angel, produced this strain. Of course, that is an allegation that was never proven. In fact, Hell’s Angel once used legal means to stop a dispensary from selling this strain under their name.

If it did not come from them, then who?

That is a good question that, unfortunately, will never be answered. Although the consensus is that it is a cross between Blueberry and OG Kush, others think it is a phenotype of OG Kush.

So, whoever the source or the breeder was, no one knows.

No, Hell’s Angel OG does not turn one into a vicious criminal, an allegation made against the infamous gang. But what it does is to turn users into mellow humans deep in relaxation.

It starts off with a gentle high that adds pressure to the temple and around the eyes. Some users may feel dizzy, but if so, that is only temporary. Pretty soon, Hell’s Angel OG start to feel uplifted. But far more than feeling happy or even euphoric, users may also feel creative.

Sharing this weed with friends, it is not uncommon to have everyone in the group being more talkative. But that does not last long as Hell’s Angel OG is not yet done. As its effects intensify, most people tend to fall silent and lost in their thoughts.

For most people, the intensifying effects may lead to an awesome positive experience. But there are a few people who may have experience an increase in anxiousness.

It could very well be that this strain was dug out from earth. It is because of its pungent and dank earthy scent which may not be all that great to some people. But it does have a sweet citrus hint after crushing the bud.

Despite not having a great aroma, Hell’s Angel OG does come with a delightful taste. A unique blend of wood and citrus makes for a pleasant taste. But keep in mind, its smoke is not smooth to the throat.

Using cannabis have great benefits to recreational and medical users. Still, it comes with known negative effects. Dry mouth and eyes are the most common ones.

As mentioned earlier, there are a few people who may feel more anxious after using this strain. Unfortunately, this is one strain that is not for everyone. It means that anyone who is dealing with anxiety should avoid using Hell’s Angel OG.

Hell’s Angel OG delivers a great and satisfying experience to recreational users. But for medical cannabis users, this particular strain has to be one of the most sought-after.

It’s heavy Indica effects not only provides a complete body relaxation but also ease pains. On feeling relaxed, it also follows that users are likely to let go of stress. As such, even people dealing with depression should find relief in its use.

After an intense physical body high, it starts to subside after an hour or two. During this time, most users would also feel tired and sleepy. It is why using this strain should only be when there is nothing else to do or at the end of the day. As for people who need help in sleeping, this could be their best friend.

As far as we can tell, there are no seeds available for Hell’s Angel OG. The only way to clone this plant is to take clippings from a mature plant and clone it. Of course, that is far easier said than done. As a matter of fact, information on growing it is scarce.

Of the few details we picked up, it seems to grow in a Mediterranean climate and could use a little higher humidity. We assume it grows well outdoor, but are unsure how it grows in an indoor setting. Because it is an Indica hybrid, it should not grow up to more than 6 feet. Aside from being short and bushy, it would also have longer lateral branching.

We may not know the specifics of growing indoor, but we are sure this strain will do well using hydroponics. Like typical Indica strains, Hell’s Angel OG will have a shorter flowering time. In as little as 8 weeks, growers should be able to harvest at least 12 ounces per square meter.

Outside in an open environment, it may be a little difficult to grow Hell’s Angel OG. While it is not hard to gain the experience and skill, it is taking a clipping from mature plants that is hard. But during the last days of September and transitioning to October, a reward awaits. During this time, growers can expect each plant to have a yield of at least 16 ounces.

What is the Hell’s Angel OG strain yield?

How much THC does Hell’s Angel OG have?

What are the origins of the Hell’s Angel OG strain?

Purple Widow was created from a mix between Blueberry and OG Kush.

Have you ever smoked or grown your own Hell’s Angel OG? Please let me know what you think about this marijuana strain in the comments below.