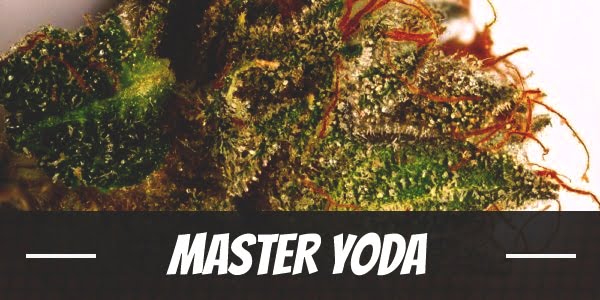 For most people, marijuana is all about good fun. With that being so, it is reasonable to expect the people behind the scenes to be the same. These are the expert growers and breeders who make a living by breeding new strains. After years of cross-breeding and in-breeding, the culmination of their hard work comes down to naming their new creation.

So, what we have here is a strain that is now officially a part of the Star Wars family. No, not the movie, but strains that have been named after the classic.

In the movies, remember Master Yoda is one of the most formidable Jedi. Besides having a stronger connection to the Force, he also trained young Jedi for centuries. Here, we have a strain named after the master, but can the strain live up to its billing?

There is no secret as to who its parents were. Master Jedi is the offspring of two prominent hybrids namely OG Kush and Master Kush. Coming from a great line of hybrids, there is a reason to believe that this particular strain can make its mark.

And so, it did. In 2012, Master Yoda took top honors in the Los Angeles High Times Cannabis Cup. With this distinction, it has set itself as one of the best hybrids ever created by men.

The innocent looking Master Jedi is a force to reckon with. Possessing as high as 28% THC levels, this may not be a great strain for beginners to start off with. For those who are new to using cannabis, go watch Star Wars or find another strain.

With experience, how does this strain work then? At the onset, it does not force its way or rush in with a sudden mental high. Rather, its intensity builds up. During the early stage, users feel the tensions from their body leaving. In its place is a new sense of calm and relaxation. As it continues to intensify, a feeling of happiness wraps the smoker.

And it continues to intensify to such levels that some people now feel euphoric. As alluded to, Master Jedi is incredibly powerful and he is not done. Users who could not take the intense and buzzing mental high could now be left on a couch-lock. Otherwise, they go on with feeling more relaxed than ever.

Master Jedi has a strong odor, but what is striking about the earthy smell with hints of pine is how long it lingers. As one user reported, even after removing the plant indoor, its odor stayed on for days.

Much of its fragrance carries over to its taste. But even better is how the blend of herbs, citrus or lemon, and pine seem to come one after the other. Due to this, what is already a delight to the taste buds is also a delight to the senses.

One thing we know and we have always advocated keeping hydrated when using marijuana. One experience that we do not even consider as a big negative is feeling the mouth and eyes dry. It is a condition that is brought about by the use of marijuana.

There is something that people should be aware of, though. As you will read about in the next section, Master Jedi is good for combating the symptoms of depression and stress. But no one person is exactly the same. Having said that, there are a few people who might feel more paranoid or anxious while using this strain. As such, this may not be the right strain for people who are susceptible.

Apparently, the master knows a thing or two about controlling stress and depression. As fans of the fine arts of fighting know, combat skills are important, but the mind is as important too. After having delivered its mental high to the medical cannabis users, it results in relief from stress. As such, even patients suffering from depression and some other mental illnesses may benefit from this.

Also, one of the reported use of Master Jedi is in dealing with spasticity. To a certain extent, even those who have problems with muscle spasms should benefit from this hybrid.

There is also a certain percentage of users who reported feeling hungry after using Master Jedi. No doubt, this must be good news for Insomniacs looking at marijuana as an aid in sleeping.

Another great thing about Master Jedi is that it can be grown in one’s home. For those who live in states or countries where it is legal, it grows well outdoor. Unfortunately, not everyone has the outdoor space or the right environment conducive to planting. An alternative, therefore, is to grow this strain indoor.

From what we learned, it seems to prefer soil as a growing medium, but it does grow well enough if using hydroponics.

Grown indoor, it is possible to keep it to around 3 feet tall, and that is when it is placed inside a grow tent. In about 8 weeks, the expected yield per square meter should be around 12 to 16 ounces.

Blessed are those who have no problems growing marijuana outdoor. Under the sun, Master Jedi will thrive and sometime during the first week of October, would come to you in the form of great-smelling tasty-looking buds, at least 16 ounces of them per plant.

Have you ever smoked or grown your own Master Yoda? Please let me know what you think about this marijuana strain in the comments below.