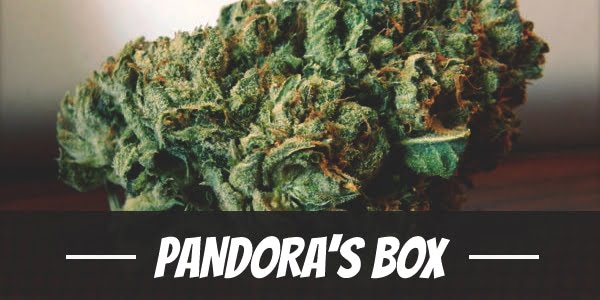 Most of the people who have a negative view of marijuana are misinformed. Without even knowing the facts, it is human nature to condemn. Remember how the church excommunicated Galileo when he announced that the world was round?

It seems as if what the cannabis users’ community is into is something that is against the world. As such, then we might as well twist some facts from myths.

Everyone knows the story of Pandora and how she opened a box to let out all the evils of the world. Does it follow that the Pandora’s Box strain contains something so horrible and dangerous for consumption?

But what is what is inside the box is something so pleasant and delightful?

Of course, we are not going to get into the myth. Instead, we will now look at the genetic lineage of Pandora’s Box.

Our featured hybrid comes from notorious parents – Space Queen and Jack the Ripper.

Space Queen delivers an intense high that sends its users on a trip to the fringe of the universe. On the other hand, as if its name is not notorious enough, Jack the Ripper also delivers an insanely potent high that sometimes leaves users confused and paranoid.

About the only thing that the strain can do to deserve a notorious connotation is that it can induce paranoia. It is one of its negative reactions that will be covered one of the following sections. Let us take a look first at its effects and benefits.

Pandora’s Box has an above average potency measured as high as 22% THC. Any time a strain breaches 20%, then it is considered as very high. The thing about this hybrid is that the experience feels like it is stronger than what was published.

This quick-acting strain delivers a buzzing mental high that results in users feeling energetic and euphoric. So, not only does it uplift the spirit and induce happiness, it brings people to the point of elation. In addition to that, Pandora’s Box also clears the mind and lets the creative juice flowing. Either the users are coming up with ideas one after another or most likely, could find themselves lost in their deep thoughts.

It is not surprising for users to giggle more or burst out laughing. In that sense, the strain works great in a group due to users feeling a little more social.

Soon after the onset of the mental high, the buzzing high creeps down to the body. As a result, users start feeling the numbing sensation of relaxation. At this point, there is a possibility of users being locked on the couch or the bed.

Once the buds break, a sweet blend of citrus and fuel or chemical fills the air. We agree with the observations of most people. Pandora’s Box comes with a great scent.

When it comes to how it tastes, it has a spicy tone blended with a mix of citrus and pine. The concoction seems to work well as its taste is described as delightful by most of the people who have used this strain.

Used in moderation, the potent Pandora’s Box may cause some people to feel their eyes and throat drying. Use a little too much, and that is guaranteed. At the same time, over using also leads some users to feel paranoid. It is not the kind of experience anyone would want when using weeds, so the best course is to use only a small amount.

One thing about the strain is that it can also cause a headache. Mainly, this is due to the extreme effects it delivers. To avoid this, use a small amount and at the same time, keep hydrated.

In some instance, the sudden rush of mental high may also cause some people to feel a little dizzy. It is usually a temporary feeling and should be gone in minutes.

This version of Pandora’s Box is unlike the one in the myth. Once opened, it does not release evil. Instead, it captures all the troubles of the world so that users may feel relaxed and less stressed. As such, it helps medical users deal with mental disorders including depression.

It also comes with other benefits such as helping people deal with nausea and reduce the symptoms of pains and aches.

Remember how one of its effects is to deliver a boost in energy? It is very much like drinking a cup of double espresso. The energy it provides helps some users manage fatigue.

Pandora’s Box thrives well outdoor and indoor. In either environment, it should take around 2 to 2-1/2 months before one gets ahold of its dark green buds covered by orange-brown hair and crystals. It does not grow too tall but keep in mind that it may breach 5 feet if grown outdoor.

It takes an average of 8 to 10 weeks for the plant to reach maturity. If grown using hydroponics, then it is possible to harvest on the early part of its estimated flowering time. By then, each square meter could have around 12 to 16 ounces yield.

The best time to harvest Pandora’s Box if grown outdoor is during the third to the last week of October. Each plant can produce at least around 16 ounces.

Have you ever smoked or grown your own Pandora’s Box? Please let me know what you think about this marijuana strain in the comments below.