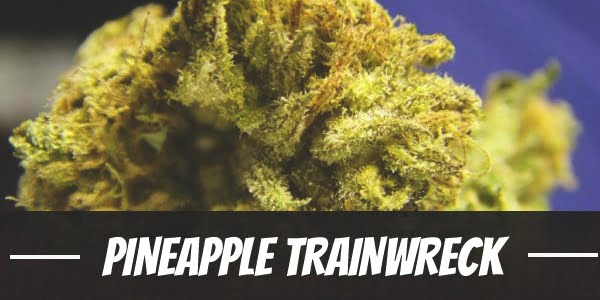 Regardless if one is new to cannabis, or plain curious wanting to learn more, one thing that is noteworthy is that there are strains that come with a history that is nearly as interesting as their names.

One good example would be the hybrid strain called the Pineapple Trainwreck. At first, the name of this strain sounds like it is an alcoholic drink from a tropical country, but the strain actually got its name from its parents.

Now, the history of Pineapple Trainwreck is also another thing that keeps the cannabis community talking and we are about to find out why.

Pineapple Trainwreck is the result of crossing two hybrid strains. In this case, the two parent strains are the Pineapple Express and the Trainwreck.

One thing for sure is that users of this strain agree that the Pineapple Trainwreck inherited the best features of both its parents.

In other words, this strain is better than any of its parents.

The implicit traits of the phenotypes of its Trainwreck parent are clearly expressed in this strain. The cross also resulted in a better resin production, terpene production and the overall structure of its bud.

With an above-average THC tested to be as high as 22%, this strain has a powerful kick that begins with a mental high that almost immediately uplifts one’s mood.

Pineapple Trainwreck on the onset causes one to feel euphoric, and for some people, could even boost creative thinking, but as the mental buzz intensifies, it might prove to be a little too much.

Due to the intense cerebral high, this might not be the best strain for novice users. As alluded to, this train can wreak havoc but it does so in a good way.

Consumers, at this point, should feel sociable and might start talking too much. After some ten minutes or so, the weaker Indica side also starts to creep into the body.

As the physical high starts to manifest, it also brings down the strong head high resulting in a good balance between the head and body high.

Pineapple Trainwreck is considered to be one of the best strains to use in a social gathering between friends.

The Pineapple Trainwreck has pungent aroma dominated by an earthy odor with a blend of sour, citrus, and spicy smell, as well as a hint of tropical fruit. Overall, this strain has a distinct smell that most people find pleasant.

Not only does the Pineapple Trainwreck have a pleasant smell, but it also has a delightful flavor. The combination of sweet and spicy taste with a hint of pineapple and tropical fruits makes this strain a joy to use.

Despite being considered as a medical marijuana, users of Pineapple Trainwreck can still acquire some adverse reactions if taken in larger amounts and without any caution.

For instance, some users might experience a mild headache, dizziness, or even feel panicky.

At any rate, one could also expect the more typical negative reactions associated with using cannabis such as feeling the mouth and the eyes drying.

Even with a low CBD level (less than 0.6%), Pineapple Trainwreck was bred for medicinal purposes. This strain is much sought for two main reasons.

One is that the potent mental high which settles as the body high kicks can help users manage their stress levels. As such, it could also be beneficial to those who are dealing with depression and other anxiety disorders.

Another popular use of this strain is pain relief from chronic pains caused by inflammation, muscle spasms, and others including hyperactivity and even gastrointestinal disorders such as feeling nauseous.

Besides the two reasons, there are other benefits that people have reported with the use of this strain. For instance, the buzzing mental high that makes a user feel euphoric is also considered to be beneficial in cases of fatigue.

There is not a lot of information in as far as cultivating the Pineapple Trainwreck. But the consensus is that it could be grown outdoor and indoor. The best way to know for sure is to ask the seller of the seeds if one could be found.

One might also suppose that this strain should be adapted to the growing conditions of most cannabis plants. An educated assumption, in this case, would be to grow this cannabis in an environment that is temperate to warm.

Although there is a lack of information, there are some growers who claim that the Pineapple Trainwreck could give a yield of 16 to 20 ounces per square meter after 9 to 10 weeks of cultivation.

As for growing this strain outdoor, it is likely that the harvest time should fall around the second or third week of October, and there is a good chance that each plant could give around 24 ounces.

Have you ever smoked or grown your own Pineapple Trainwreck? Please let me know what you think about this marijuana strain in the comments below.