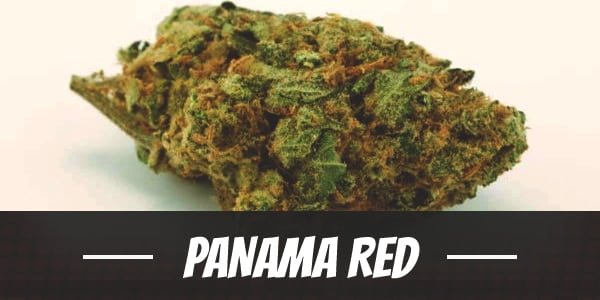 While landrace strains are, in reality, the building blocks of modern cannabis varieties, these strains actually offer a unique experience of their own. Unfortunately, only a handful of users can really say that they have once enjoyed a pure landrace weed.

Most modern cannabis users are more likely to opt for the recent varieties that are specially bred to impress seasoned users with their sensational potency and overwhelming effects. For that reason, some landrace strains have lost their fame over the years. However, this does not change the fact they have once taken the cannabis world by storm.

This is basically the story of the landrace strain called Panama Red. This pure Sativa strain has once belonged to the list of the most sought-after cannabis varieties of its time. Eventually, the strain lost its charm due to certain reasons and has never earned back the level of popularity that it once had.

Nonetheless, every user who had the chance to smoke Panama Red can attest tothe strain’s delightful high. Now, for prospective users of Panama Red, here is what you need to know about this classic strain.

As its name suggests, Panama Red is a landrace strain that originated from Panama. This Central American weed became popular among cannabis users starting from the late 1960’s to 1990’s due to its typical Sativa effects.

Panama Red is known for its lengthy flowering period, moderate yield and significantly lower THC levels. While these traits are not necessarily unfavorable during its time, these are now considered as some of the major drawbacks of any cannabis variety.

Hence, Panama Red is now rarely found in most dispensaries. In fact, the seeds of strain are said to be available only from its original breeder, Reeferman. For the curious ones, the strain is now mostly found in Oregon, Washington, and Northern California.

Although Panama Red has now been overshadowed by modern cannabis varieties, it is still considered as a delightful strain that both veteran and noviceusers will appreciate.

With its significantly lower THC content that can reach a maximum of 16%, the strain can be enjoyed by all types of users without the fear of any overwhelming effects. Being a Sativa-dominant strain, Panama Red boast of a series of cerebral upshots.

To wit, the strain delivers a mellow yet distinctly happy and euphoric onset that can boost a user’s energy and stimulate creative thoughts at the same time. Some users would describe its overall high as speedy and intense with psychedelic tendencies.

Due to Panama Red’s energetic high, it is a great strain choice for social gatherings or any activity that requires active social behavior. Surprisingly, the strain also offers a mild relaxation to finish off its rather lively onset.

Panama Red gives off an interesting combination of earthy and fruity scents. The strain’s overall fragrance can be likened to a pungent earth smell with subtle hints of the fruity citrus aroma of grapefruit.

To complement its happy high, users are rewarded with a delicious concoction of flavors that can be described as herbal and spicy with some intriguing notes of tropical fruits reminiscent to the sweet and citrus taste of grapefruit.

Considering the low THC concentration of Panama Red, it is less likely to cause psychological side effects. To wit, users are more likely to experience dry mouth and may not notice any sign of adverse reaction.

Although, in rare occasions, users may experiencing drying of the eyes, paranoia, headache, and dizziness.

Due to Panama Red’s impressively uplifting properties, it is widely known to effectively fight stress and even help other patients combat the symptoms of depression. Other sources would argue that the strain can also benefit patients with ADHD and other types of mood disorders.

Considering the modern standards of cannabis cultivation, Panama Red certainly falls behind. Although the strain can be grown indoor or outdoor, it is not the easiest strain to cultivate. In fact, its outdoor cultivation requires a tropical or sub-tropical climate for the plant to thrive. Hence, it becomes preferable for growers to keep the plant indoors or in a greenhouse environment.

At the same time, due to its long flowering period and moderate yield, most growers are less likely to choose the strain for commercial growing. Thus, affecting the present supply and demand of Panama Red.

TIP: Buy seeds like Panama Red at my seed shop

As mentioned, the strain’s flowering period can be quite lengthy. To be exact, it can take 77 to 84 days or approximately 11 to 12 weeks to finish flowering. The yield is not even that rewarding. Growers are only expected to harvest about per square meter.

Regardless if the plant is cultivated in its ideal growing environment, Panama Red still needs more time to mature. Late October is the typical harvest time of strain and its total yield is likely to be around 16 ounces or more per plant.

Have you ever smoked or grown your own Panama Red? Please let me know what you think about this marijuana strain in the comments below.