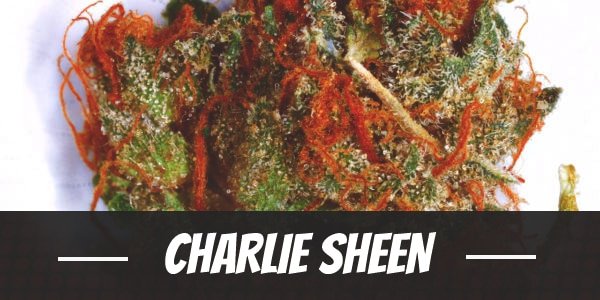 When things get really artsy in the cannabis world, breeders tend to bring out their creative ideas to life by creating strains with the most interesting effects and appointing them with either the most unique or the most nostalgic of names.

There are literally thousands of strains known to the cannabis community which means that breeders have most likely exhausted almost all the possible names they could think of–from fruits to guns and to celebrities. Yes, that’s right, celebrities. It must sound really weird to a regular person when users say they are smoking so and so which happens to be a popular movie star.

Nonetheless, there are quite a number of strains today that are inspired bydifferent celebrities. These strains are akin to their personalities which primarily supports their aliases. A good example is a strain known as Charlie Sheen. Anyone familiar with the actor must have an idea of what to expect from this strain.

Charlie Sheen is one of the strains with the most impressive lineage. It is believed to be a three-way cross between OG Kush, Green Crack, and Blue Dream. Thus, it is also known as Charlie Sheen OG.

The strain is said to be named after the equally infamous TV show star and movie actor, Charlie Sheen himself. No breeder has claimed the right of developing this strain. Therefore, no one can really explain the true story behind its namesake. Nonetheless, connoisseurs believe that Charlie Sheen strain has pretty much mirrored the elated spirit of the actor.

Unlike any typical Indica-dominant strain, Charlie Sheen does not lead users into a couch-locking state. Although, beginners and users with low tolerance are still advised to avoid the strain as its 24% maximum THC concentration can easily overwhelm its users.

Charlie Sheen is especially recognized for its happy and energetic kind of high, a shared trait of the infamous actor himself. The uplifting euphoria it brings can boost one’s energy, making it almost impossible for users to contain its socially stimulating properties. Thus, it can be a great strain choice for an evening get-together with friends.

After an hour or so into the high. the Indica side of Charlie Sheen finally takes over. This time, users will find themselves trapped in a state of deep relaxation that others may find a little disorienting. However, seasoned users are less likely to experience any sing of such disorientation.

Overall, Charlie Sheen’s high starts with a sociable, fun and energetic sensation then finish off with the most relaxing feeling after a few hours–pretty much like a complete party package with a bonus after-party accommodation.

Being one of the most popular strains among veteran users, Charlie Sheen offers a classic combination of pungent, earthy and kush aroma with a few hints of sweet and lemon scents.

Properly cured, the nugs explode with lemon and orange sensations that can bemore likened to that of a cleaning product with such similar fragrance. Others would describe its aroma as grassy and vegetal that is reminiscent of incense. Either way, Charlie Sheen is one to fill the air with a pleasant classic pot aroma with a kick of lemon.

The flavors of Charlie Sheen are equally pleasing to seasoned users. To wit, the strain tastes like a fresh, grassy kush that can be described more specifically to reflect that of a pine taste with a touch of lemon and sweet berries.

When combusted, the strain burns smooth and fills one’s taste buds with the fascinating taste of an overripe fruit with a dank pine aftertaste. Surely, the strain offers quite an interesting combination of flavors, but it certainly is the type of experience that every veteran user will love.

Aside from Charlie Sheen’s highly potent attributes, prospective users should also be mindful of the various adverse reactions associated with the strain.

It turns out that Charlie Sheen is more likely to cause dizziness and paranoia. So, users who are susceptible to the latter condition should always take extreme precautions before smoking the strain. Furthermore, Charlie Sheen is also known to cause dry mouth and in rare occasions, users may observe signs of dry eyes mild anxiety.

Although the strain initially comes with a red flag warning for beginners and low-tolerance users, it does not take away the fact that Charlie Sheen is also capable of producing effects that are significantly beneficial to medical marijuana users.

With a maximum CBD concentration that is slightly higher than 1%, the strain has a huge potential of aiding patients with epilepsy and seizures. On top of that, Charlie Sheen is also known to effectively reduce the stress levels of patients and, at the same time, may further help with depression.

The Indica effects of the strain, on the other hand, are likely to provide temporary relief to patients who are in pain due to injury or a medical condition such as headaches and fatigue.

Charlie Sheen is a clone-only strain. This is most likely due to the fact that no commercial breeder has actually offered the seeds of the strain for commercial sale. Nonetheless, if one is lucky enough to obtain clippings from a healthy plant to grow as clones, one may choose to cultivate them either indoor or outdoor.

If grown outdoors, the plant may require a semi-humid climate with daytime temperatures that are within the 72° to 80° Fahrenheit range. Also, somegrowers advise exposing the plants to cold temperatures at night to bring out their purple hues.

Note that this can only be done right before the plants begin their flowering stageand growers should avoid freezing temperatures in doing so.

Indoors, Charlie Sheen’s flowering period can last 9 to 10 weeks. However, the strain is known to produce medium yields. So, growers can expect a total indoor yield of about 12 to 16 ounces per square meter.

Given the ideal growing condition, the nugs of Charlie Sheen may be harvested by mid-October and its overall outdoor yield can reach 16 ounces or more per plant.

Have you ever smoked or grown your own Charlie Sheen? Please let me know what you think about this marijuana strain in the comments below.