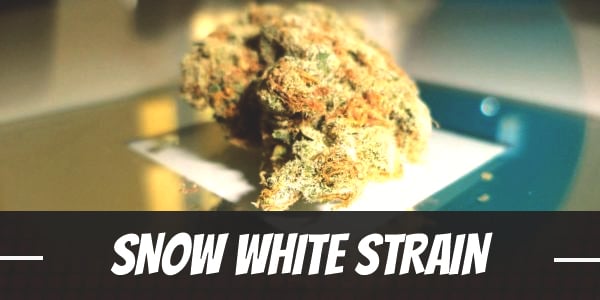 Of course, the marijuana community has something to say about the classic fairytale. In our version, we do not have the seven dwarves. Also, we do not have the Huntsman. Ours may not be the daughter of a queen, but she sure does have royalty in her blood. Snow White, with buds covered by sparkling crystals, is not only pretty. She also comes with incredible traits and potency.

Snow White delivers powerful physical high complemented by an uplifting mental high without causing a couch-lock. These are the properties that have made her popular with recreational cannabis users. But more than that, she also brings comfort to medical cannabis users as well.

For a while, it may be true that her parent, White Widow, is a widow. Early on, users knew only one of her parent and that Snow White was a result of a cross with an unknown Indica. For that reason, whichever Indica that was, it might as well be dead. But it is now coming to light that the other parent is Northern Lights. This version of Snow White is available from Nirvana Shop in regular and feminized seed form.

There is another variant from Spliff Seeds. Using one phenotype of Snow White, they crossed it with Cinderella 99 to create. As a result, the new Snow White has a better flower-to-leaf ratio, it is more compact and comes with higher potency.

Both parents of Snow White – Northern Lights and White Widow – are among the most celebrated strains in the world. They have been around for decades and remain as popular today, as they were in the 90s.

Snow White delivers both mental and physical high in ways that are gentle. At the onset, the mellow cerebral high eases away thoughts of the evil witch and other negativities. As users start to feel uplifted, so too does the mind start to feel clearer. Were it not for its higher Indica side, users may go on to feel euphoric, but as mentioned, this strain is gentle.

Snow White is a great party strain. In any social circle with friends, one of the things it does is not only to make users feel good. It also induces friendliness and happiness. As a result, it is not uncommon in groups to have people giggling over anything and everything. All these wonderful effects and users remain focused.

As the physical high starts to creep in, the sensation washing over the body causes users now to feel relaxed. So, aside from uplifting mood and relaxation, its physical high also benefits medical cannabis users without the sedative-like traits of others.

Snow White has a dank and earthy smell. Think of it as standing in the middle of a field early in the morning. Breathing in the fresh air, there is a sweet and citrusy hint that accompanies its scent. This strain is not just another pretty name, but it also comes with a pretty nice smell too.

Instead of the earthy scent carrying over, this strain has a skunkier taste. From the middle of the field, think of the forest this time surrounded by pine trees. The distinct blend of pine and citrus is evident and lingers on as an aftertaste. Just like how its Sativa and Indica side complements each other well, so too does its mix of flavors.

Snow White is not without its dark side. Beneath the pretty face (or buds, in this case) are negative reactions. Among the most common ones are having dry mouth and eyes. Not that it is a surprise as these are common with the use of any marijuana.

There are a few other reactions which users should know about. Using Snow White, in rare instances, may cause a headache, dizziness, or cause some to feel a little uneasy. The best way to avoid these concerns is simple. Use with caution and always within one’s own limits.

When it comes to medicinal value, Snow White can morph into Florence Nightingale. She brings comfort to those who are suffering from pain. Its Indica side provides complete relaxation, which in turn, offers some relief. At the same time, the whole-body relaxation complementing its mental high helps in reducing stress and depression. Even better, this strain does not have sedative-like effects nor can it cause couch-lock.

Growing Snow White strain is easy enough, especially in an indoor environment. Sure, it does grow well outdoor but she will have a lower yield.

Indoor, the best way to cultivate is to combine the Sea of Green (SOG) method with hydroponics. In this way, not only does she grow faster, but her yield increases and retains its max potency.

In around 8 weeks, Snow White should be ready. Growers can expect a generous yield per square meter of 17 to 21 ounces of dark green buds covered by white crystals.

Snow White is a little harder to grow outdoor, but done in the right environment with proper care, she should be ready in the first two weeks of October. Unfortunately, she will have a lower yield than when planted indoor. Her yield per plant will be around 12 ounces.

What is the Snow White strain yield?

How much THC does Snow White have?

What are the origins of the Snow White strain?

Snow White was created from a mix between Northern Lights and White Widow.

Have you ever smoked or grown your own Snow White? Please let me know what you think about this marijuana strain in the comments below.