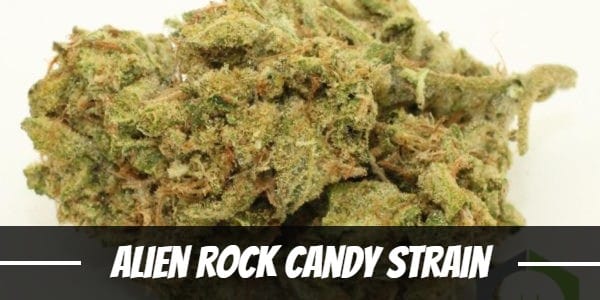 Humanity’s quest to find other planets we can live in some day suffered a setback recently. As talk of going to Mars reached fever-pitch a year ago, it now seems like that is not a good idea. Scientists now believe that toxic chemicals cover the Martian surface. In other words, it is uninhabitable. As such, searching for a home among alien worlds remain elusive.

But we humans are ingenious, and not to mention, enterprising. Instead of going to mysterious worlds, we can have our own alien right in the comforts of the home. Even better, Alien Rock Candy can send us to dreamland where we can explore wherever as much as we want to. In the process of doing so, it also makes us feel euphoric and relaxed, both at the same time.

Associating Alien Rock Candy to the extra-terrestrial is not a surprise. After all, its original breeder calls itself Alien Genetics. As a result of crossing their own Tahoe Alien with Sour Dubble, they created a hybrid with more Indica side than its parents. Alien Rock Candy is also sometimes referred to as Alien Candy.

Alien Rock Candy has a high 80% Indica side. Because it also has a THC that can reach up to 23%, it follows that users must never underestimate its potency. One thing about cannabis strains is that the measurement of its THC level is never accurate. In some cases, for instance, it is possible to have a lower potency and that is due to a lot of things. From growing to keeping it sealed, there are too many factors that can affect potency. For that reason, some people may say that a particular strain is not potent, while others disagree.

Even with a much lower Sativa side, Alien Rock Candy still delivers powerful mental high. For instance, most users start feeling the effects of this strain with a mood swing. Regardless of whatever mood one is in, this baby will uplift the mood all the way to euphoria. Feeling happy and elated, its physical body high starts to creep in and take effect.

As the mental high settles down, the body starts to feel more relaxed. In some cases, there are people who will feel sedated. As a result, there is a lazy feeling or unwillingness to move. In other words, the couch or the bed starts to replace dog as man’s best friend.

The powerful sedative-like property of Alien Rock Candy makes it ideal for night time use. At the same time, it also brings with it several benefits for medical marijuana users. At any rate, anyone using this strain are also likely to fall asleep before its effects subsides.

Alien Rock Candy comes with a pungent odor and yes, it definitely smells like Kush. But at the same time, it also has a distinct sweet smell of orange. Because of that, this cannabis strain should prove to be a delight to the senses.

There are marijuana strains that smell great but could not match it with great taste. Fortunately, Alien Rock Candy is not one of them. In fact, while its scent carries over to its taste, it is underwhelming. Instead, what most users love about it is the sweet and citrusy lemon blend that makes it a real treat to the palate.

A couple of negative reactions as a result of using Alien Rock Candy is to be expected. As is the case with all other strains, users will experience dry mouth, and sometimes also dry eyes.

Although most strains are easy to handle, that is not the case with a few others. Alien Rock Candy sits somewhere in the middle where its use may also cause some people to feel paranoid. Also, there are some other who may feel momentary dizziness. As mentioned, users should never underestimate the potency of this strain. Feeling paranoid or dizzy is often because of using a little too much. Of course, it goes without saying that there really are people who have much lower tolerance levels.

Compared to other strains, Alien Rock Candy has a little higher CBD level. Unfortunately for those with epilepsy or seizures, it remains way too low for it to become an effective treatment. Still, it does come benefits for other medical cannabis users.

For instance, it is common for users to fall asleep even before its effects completely eases out of the body system. As such, its top medical use is to help Insomniacs feel drowsy and sleep.

Combining its uplifting effects and physical body relaxation, Alien Rock Candy can also help people reduce stress. In some cases, it may also be helpful in managing depression and other mental health disorders including PTSD. Because of its sedative like properties, it also helps alleviate the symptoms of mild pains and aches.

Like many other strains, one of the effects of using Alien Rock Candy is that some people feel hungry. On one hand, this is great for those who do need help in stimulating their appetite. But the flip side to this is that most people also feel too lazy to move and get food.

Alien Rock Candy is an easy strain to grow. It also appears that it is more resistant to pests and mold. Still, like any other plants, she will need a lot of care. Growers have a choice of planting it outdoor and if so, it will thrive well in a Mediterranean like climate.

While planting outdoor is great, most people do not have that luxury. The good news is that it also grows well indoor, especially when combining Sea of Green (SOG) technique and hydroponics.

Like a typical Indica strain, Alien Rock Candy has a relatively short flowering time. Of course, that can be reduced if using hydroponics. In as early as 7 weeks, growers can expect a yield per square meter of up to 18 ounces.

Growers who can grow in their garden are lucky. As everyone knows, it can be expensive when growing indoor. At any rate, sometime during the mid-part of September, each Alien Rock Candy plant should have a yield of around 18 ounces.

What is the Alien Rock Candy strain yield?

How much THC does Alien Rock Candy have?

What are the origins of the Alien Rock Candy strain?

Alien Rock Candy was created from a mix between Sour Dubble and Tahoe Alien.