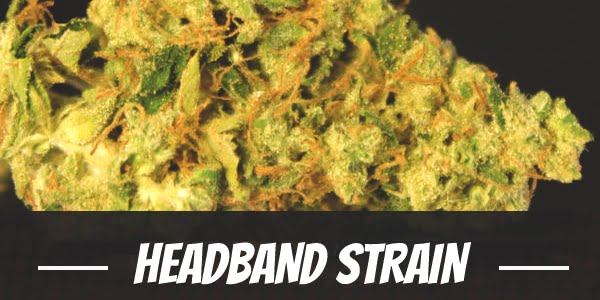 This indica-dominant strain gets its name from its potency. It can induce a bit of a brain fog, hence “Headband” – causing your head to feel like it is wrapped in something. Headband is popular for its ability to treat many minor and major health issues and case some serious relaxation.

Another nickname for this strain is “Sour Kush”, because Headband was created by merging two power-strains, namely OG Kush and Sour Diesel. The strong cerebral effects create some noticeable pressure around the temples, inducing a soft but solid cranial high.

Download my free Grow Bible and grow your own Headband!

It is noted to be a strain that is more potent than the average, and can produce varying yet pleasant effects even in small controlled doses. Because of its versatility, Headband has become a classic standby strain, and is most popular on the Californian West Coast.

This indica’s effects are what makes this strain such a classic. Its effects have been described as “a bit like being wrapped in a warm and fluffy blanket”, highlighting its extreme relaxing properties. Headband is surely great at relieving all sorts of stressed, aches and issues and making you feel enlightened.

The strain creates a sensation around your head that feels like you are wearing a headband, hence its name. Its high has been said to last an estimated 2-3 hours, and its effects vary and intensify the more you smoke. The euphoria that Headband induces is unique in that it makes your head feel a bit like it is in the clouds, and is calming and soothing all at once.

When smoking Headband, it can provide you with a boost of creativity and the desire to think up some inspired ideas. This uplifting experience makes Headband a strain that every cannabis lover must absolutely try.

Headband’s fragrance is much within the same realm as its flavors. Its sweet and pungent presence is distinctly lemony. This strain’s scent is extremely fragrant and noticeable, and spreads all over the room. There is a slight diesel undertone that may hang in the air, with a shock of earthiness to it.

When it comes to flavor, this strain is quite special. Headband is known for the sweet lemon flavor it produces, but it is its creamy note to it that makes it stand out from the rest. When smoked, it leaves a tangy yet earthy taste on the lips, mixed in with a hint of fresh lavender.

Because of its strong indica presence, Headband can create a bit of a couch-lock, especially when consume a larger quantity. This can sometimes make you feel slightly paralyzed and unable to move, which in some cases can cause a little paranoia.

A sense of dizziness can occasionally occur in Headband, which is normal in indica strains. Headband can make you feel dehydrated sometimes. It can create a dry mouth sensation mixed with a feeling of dry eyes.

When used for medicinal purposes, Headband is quite the multi-talented aid. This strain has been widely recommended in the treatment of many mental disorders, such as depression, anxiety and ADD/ADHD, for its ability to relax without making the patient feel drowsy.

This indica is a powerful stress-buster, which is one of the main things Headband is being prescribed for. Another reason why the name “Headband” is so fitting is because this strain is said to be perfect in the treatment for chronic headaches and migraines.

Because it is supremely efficient as a tranquilizer and relaxant, Headband also makes for the perfect sleep-aid. It can make you forget all your day-to-day worries and succumb into to deeper state of relaxation, successfully allowing you to get a good night’s shut-eye.

This strain is fairly easy to grow for novices and more experienced growers alike. Headband is suitable to be grown indoors as well as outdoors and can truly flourish under the right conditions.

This plant prefers a sunny warm climate to grow in, and needs to be sheltered from too much rain when kept in wet climates. In order to ensure this tree’s best health, close attention must be paid to the humidity levels of its environment, and that there is no frost in sight.

Headband, when grown indoors, takes an estimated 9 to 10 weeks to flower under the best conditions. During harvest, it can yield an estimated average of 18 ounces per square meter.

When cultivated in an outdoor setting, the strain can yield an estimated 21 ounces per plant. The best time of the year to harvest this indica strain is usually around the middle of October.

What is the Headband strain yield?

How much THC does Headband have?

What are the origins of the Headband strain?

Headband was created from a mix between OG Kush mixed with Sour Diesel.

Have you ever smoked or grown your own Headband? Please let me know what you think about this marijuana strain in the comments below.