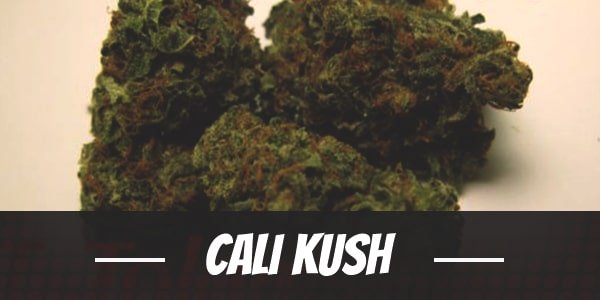 If using cannabis is for recreational purpose, then the Cali Kush should be a great strain to use in a casual social gathering when chilling with friends. It is also a good choice for relaxation at the end of the day.

Rather than rushing in a buzzing head high, and some strains are psychedelic, the Cali Kush is one that could uplift your mood and leave you in a state of total relaxation. Unlike a lot of Indica-dominant strains, this one does not appear to leave users on a couch-lock.

So, did this strain originate from California? While it is normal for strains to be named after the location of its creation, Cali Kush was never bred in California. Incidentally, it is also known as California Kush.

No one knows the lineage of this strain, but there is one strain out there also called by the same name that was bred by Sumo Seeds, an outfit based in Netherlands. Their version of the Cali Kush is Sativa dominant and was a cross of Mendocino Purps and LA Confidential.

The predominantly Indica hybrid we have here, on the other hand, remains mysterious.

One of the strains that are excellent for use on a lazy day alone or chilling out with friends would be the Cali Kush. It might be mostly an Indica strain, but it still gives you a head high that might even increase the level of alertness. But that is only temporary as the physical high kicks in and work its magic on the body, you soon find yourself in a relaxing bliss.

Consumers of the Cali Kush would describe the effect of this strain as a mellow and calming sensation that increases in intensity slowly. In a matter of minutes, they feel a sense of overall happiness. For some people, they might even feel euphoric but not in a way that makes them highly active.

Cali Kush has an incredible aroma that reminds you of lemon tea. It would be interesting to know its exact genetics, but no one really knows. Nevertheless, its fragrance is further enhanced by a distinct but subtle smell of coffee.

Anyone new to the cannabis scene would no doubt grimace at the thought of the smell of skunk. But that same odor is the one that gives some strains a distinct flavor that makes it delightful. The delightful aroma of Cali Kush carries over to its taste, but the skunky undertone and a hint of spicy aftertaste while exhaling make it taste even better.

Like other strains, a negative reaction you could expect by using Cali Kush is feeling your mouth and eyes drying. There is nothing to worry about it though, as these are common reactions all cannabis users know about.

However, be mindful of how much you consume as too much could result in an elevated level of anxiety.

It is not often that a cannabis strain would not have stress relief as its most popular use among medical cannabis users. But Cali Kush is one of the rarer ones in that it is one of the top choices of those who are dealing with depression. Come to think about it, depression and stress are related, so it makes sense that the second most popular use of this strain is to reduce stress.

The relaxing feeling it gives the body helps also in reducing the symptoms of pain, so those who are suffering from chronic aches and pains should find it beneficial as well.

Cali Kush can be grown outdoor and it seems to do pretty well in a Mediterranean climate. But where it actually does even better is in an indoor environment, regardless if you choose to use soil as a medium or hydroponics. This cannabis responds very well to the Sea of Green (SOG) method and could give a higher yield than if grown outdoor. Being resistant to mold and fungus, beginners to planting should find this strain relatively easier to grow than most other cannabis plants.

Compared to many other strains, Cali Kush has a relatively shorter vegetative growth and in as early as 7 weeks, it should delight you with its massive green buds that are covered by orange and brown hairs, and frosty resins.

Depending on the growth medium, Cali Kush could be harvested in as early as 7 to 8 weeks. This strain is popular among indoor cannabis growers, not only for its flavor and effects but also because of the monster yield of 22 to 24 ounces per square meter.

Cali Kush loves the sun and in a warm climate that is similar to that of the Mediterranean, it should be ready for harvest by the second or third week of September. Although it has a higher yield indoor, what growers could harvest is still a lot with around 18 to 20 ounces per plant.

Have you ever smoked or grown your own Cali Kush? Please let me know what you think about this marijuana strain in the comments below.