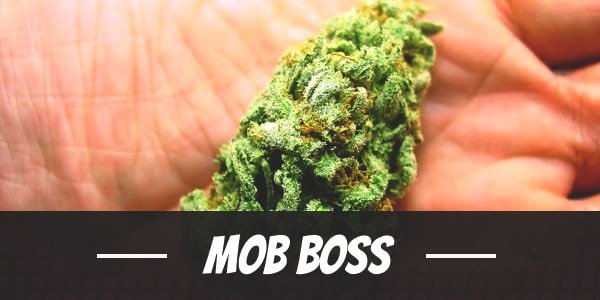 One fun fact about cannabis, in general, is that their names can be very interesting. Some have names inspired by their parent strains while others tend to be unique and are definitely way cooler.

Let us take this one particular strain called the Mob Boss as an example. The “Mob” and “Boss” combination is clearly a smart one. After hearing this name, one could easily think of a cannabis variety that is highly potent with a strong cerebral or physical high.

Indeed, this strain has lived up to its seemingly tough name. It is known to be highly potent with overwhelming effects. In fact, this is one of those strains that beginners should not be messing around with, without the necessary precautions.

To give you a clearer picture of this strain’s most notable attributes, check out the following information below.

The Mob Boss is a hybrid strain that resulted from crossing Chemdawg and Tang Tang. It was first developed in 2009 by the Grindhouse Medical Seeds in California.

The strain has two different phenotypes which may vary in their potency and effects. However, Mob Boss, in general, is popularly known for its strong potency and high levels of resin production.

Mob Boss has an above-average THC content of 18%, but in some tests, it could also reach as high as 24%. This data should tell us that this strain is in fact highly potent.

As a Sativa-dominant strain, you can expect it to have a strong head high. However, this effect depends on the specific phenotype of the strain. Some could give a much lighter buzz while a high-quality Mob Boss phenotype could be overwhelmingly strong.

The cerebral effect of the Mob Boss can cause feelings of euphoria, happiness and heightens the user’s senses. The latter could also be a bit psychedelic for some that result in visual distortions and time dilation. The head high of the Mob Boss is said to be helpful in situations that call for creative thinking and problem-solving (when consumed in moderation).

On the other hand, the physical high of the Mob Boss can be manifested as the user feels more relaxed, but not entirely strong enough to keep one locked on a couch.

It is important to note that the smoke of this strain may be harsh and could even cause coughing especially for beginners. It could also sting the eyes and sinuses.

Based on its effects, the strain is recommended for afternoon or evening use.

The Mob Boss is known to have a light and sweet floral scent with a tinge of citrus and herbs. As one might expect, the lemony aroma is favorable to the senses.

There are numerous flavors associated with this strain. The most common are sweet, spicy, lemon, citrus and woody. Other users find it to be more pungent and skunky, but the sweet and sour tastes become more evident during exhalation.

Considering the fact that this strain is highly potent, using more than what one could tolerate can easily cause adverse reactions. While it is dry mouth and dry eyes are common, a few might experience a slight increase in anxiety, while some others might even feel panicky. It is also not uncommon for beginners to feel dizzy soon after the onset of the cerebral high.

The Mob Boss strain is not only popular for its potency, but also for its significant medicinal value. For medical cannabis users, this strain is sought after for alleviation of muscle tension and spasms, inflammation, headaches, and migraines.

This strain is also high popular among those who are going through depressions. The powerful mental high that subsides as the sedative properties relax the body is helpful in lowering anxiety and stress. Indirectly, this might offer relief for from the symptoms of PTSD and even PMS.

As the effects of the strain subside, consumers are likely to feel hungry. For that reason, the Mob Boss could very well be an insomniac’s best friend.

The good news is that this strain can be grown either indoor or outdoor. However, it does need some level of experience to successfully cultivate.

Cultivating the Mob Boss indoor should offer a shorter flowering time, especially when using the Sea of Green (SOG) method. Due to the usual limitations of growing space, it would be a good idea to top early and keep the plant height to around 4 feet.

For growers who are fortunate to have an outdoor area, a Mediterranean climate with temperature in the range of 70 degrees Fahrenheit is the optimal environment for this strain to grow.

After successfully cultivating, growers should cure the harvested buds properly to preserve its potency and flavor. The curing process lasts around 7 days with the buds hanging upside down. Be sure to maintain a temperature of 70 degrees Fahrenheit and humidity to 50% RH for best results.

After the curing process, the buds can now be placed inside wide-mouthed jars.

Indoor, the flowering time of the Mob Boss strains between 60 to 75 days with an expected yield of 24 ounces per square meter.

Outdoor, the Mob Boss should be ready for harvest by the first or second week of October with an estimated yield of 28 ounces per plant.

Have you ever smoked or grown your own Mob Boss? Please let me know what you think about this marijuana strain in the comments below.