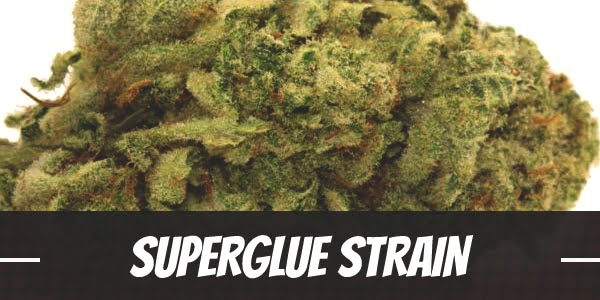 Superglue strain is indispensable at home or in the office. Anything that breaks and chances are high we default to fixing it with superglue. Now, the Superglue strain we have here is not going to fix anything we break.

It is also not going to fix our minds or bodies. Instead, what it can do is to provide an amazing experience, bring comfort, and glue us to the couch.

To say that the Superglue strain comes from a prominent line is an understatement. Both its parents are legendary and have won countless awards over the decades. Breeders have also used both in crossing and creating countless other strains.

Having strains considered by many as classics as parents have its benefits. For instance, it takes the best traits from both and combines them into one strain. As a result of crossing Afghani and Northern Lights, Superglue inherited the potent Indica properties.

Superglue is also known as Superglue OG or Super Glue. While there is a consensus on its genetic lineage, there may be other variants.

One that we know of is a cross between Northern Lights and Afghani. At any rate, Superglue is an elusive strain. As such, it may not be available most of the time.

Superglue, like its namesake, is formidable. As such, this is not the best strain to start off beginners. In only moments after a few tokes, users start to feel its intense hit beginning with feeling uplifted. as it rushes in its mental high, users start to feel their minds clearing. Not only do they feel happy but also focused.

The mental high can come rushing in but it does so by allowing users to continue functioning. For a brief moment, with a clear head and heightened focus, doing tasks become easier. Even if one were to feel euphoric, they remain productive.

But Superglue’s best trait is yet to come. It has a dominant and potent Indica side that creeps into the body. As muscles loosen up and tension leaves, users now feel relaxed.

For most, they feel too relaxed that before realizing it, they are reluctant to move. Because of this, the original breeder named it Superglue with regards to users sticking to their couch or bed.

Because of its heavy-hitting properties, the best time to use this strain is when there is nothing to do. Even better, it is great for nighttime use a couple of hours before sleeping time.

Superglue has a pungent diesel scent that comes with an earthy and woody undertone. This is something to keep in mind when growing or planting as people from afar may smell it.

The flavor of Northern Lights is quite skunky and full-bodied, without being overpowering. It hints at fresh pines and earth mixed with a bit of sweetness. A trace of lemon can also be observed when smoked, and it can leave a sweet dank taste inside your mouth afterwards. Read our full review!

Carrying over from its fragrance, the pungent chemical smell is infused with citrus, as well as having a mild woody taste thrown in. In some ways, this may remind some people of cleaning furniture using lemon-scented Pledge.

Of course, the way it is described here may not sound appealing, but in reality, it does taste great and most people will agree with that.

There is no getting around it. Using cannabis results in dry mouth, and in some cases, dry eyes. As such, staying hydrated is a good idea. Although these conditions are common, they can also be annoying.

Come to think about it. As soon as the effects of Superglue kicks in, dry mouth and eyes are the farthest things in the minds of the users.

Other concerns that were brought up by some of its users also include feeling more anxious or paranoid and dizziness. In all these cases, it is only temporary and will go away in minutes. But if it persists, then it is either cut down on the amount used or use another strain next time.

All the wonderful benefits of Superglue that recreational users have come to love are the same reasons why it has great medicinal values. By inducing total body relaxation and inducing the mind to think of happiness, that in itself takes care of reducing stress. Even people with depression may find its use helpful as they deal with their mental health disorder.

Because most people using Superglue tend to stay on the couch, dozing off is common. As such, it can be helpful for insomniacs.

Finally, one of the things that people feel as the heavy hit wane is to feel hungry. So, those who need help in getting food to their stomach could use Superglue as an appetizer first.

About the only thing that makes it a tad bit difficult to grow is due to its susceptibility to mold. Mainly, it is due to the large colas and as such, growers should make sure there is adequate air flow.

Other than that, it is pretty much easy to grow and should thrive well both in outdoor and indoor environments. Because of its abundant yield, Superglue is also one strain that makes for a great cash crop.

We love growing marijuana indoor because not only can we simulate a climate that is ideal, but it is also because of the shorter flowering time. Although listed at 9 to 10 weeks, there is a possibility that Superglue could be ready in 8 weeks or less. Even better is that per square meter, it has a yield between 14 to 18 ounces.

As for growing it outdoor, the estimated yield per plant is around 14 to 22 ounces. Superglue should be during the last days of October.

What is the Superglue strain yield?

Superglue yields 14 to 18 ounces per square meter indoors and 14 to 22 ounces per plant outdoors.

How much THC does Superglue have?

What are the origins of the Superglue strain?

Superglue was created from a mix between Afghani and Northern Lights.

Have you ever smoked or grown your own Superglue? Please let me know what you think about this marijuana strain in the comments below.