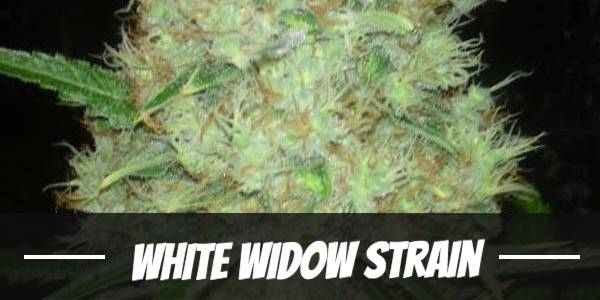 This 1990’s hybrid is toted as a staple in the Amsterdam coffee-shop scene. An indica-dominant strain, White Widow is known and loved for its steady, strong head high. Often referred to as a more cerebral smoke, White Widow allows for a light feeling of relaxation, with a vivid, enjoyable mental buzz.

Famous as one of the first imports from Europe, White Widow was bred in the Netherlands first. It was created by crossing a South Indian Indica with a South American Sativa, and is known for its distinct buds covered in sticky crystallized resin, and its potent effects.

Growers love this strain for its uncomplicated characteristics. With the THC levels in the above average, White Widow is guaranteed to maintain its all-round popularity.

The balanced, well-engineered strain, can leave you feeling physically relaxed, without the extreme heaviness that many day-time users try to avoid. This among other reasons is why it is well-referred to as a strain that deserves the hype it comes with. If that’s what you’re looking for, make sure to check out White Widow Seeds in our marijuana seed shop.

This strain has been widely recommended for the treatment of those who suffer from the stresses of daily life. It is, therefore, the perfect come-down smoke after a long day at the office and work. Fatigue has also been successfully eased with White Widow, due to its mentally stimulating properties.

White Widow’s powerful energizing effects along with its relaxing properties guarantee a great time by relaxing and uplifting simultaneously while offering an expansive, social high with a light-bodied presence. If that’s right up your alley, then make sure to check our White Widow seeds in the ILGM seed shop, where we’ve got both feminized and auto-flowering seeds!

Growing this medium height strain indoors can yield up to 18 ounces per square meter. White Widow is said to have an estimated average flowering time of around 8-9 weeks.

Our free little Harvest Guide will help you determine the best moment to cut your plants for harvest. Download it here.

If you are growing White Widow outdoors, there is a very good chance of a more generous yield, often reaching up to 21 ounces per plant. Typically, White Widow is available for harvest around the end of October.

What is the White Widow strain yield?

How much THC does White Widow strain have?

White Widow was created in Netherlands, by crossing a South Indian Indica with a South American Sativa.

This is an amazing first time grow for us. The first batch was super tall … exceeding 5 feet tall plants! Yikes! Our second grow we are stress training so they are wider and shorter. The buds are crazy frosty! We are in the drying stage now. Can’t wait to see how

Highly recommend. Very smooth after curing properly. Very potent indeed and a smooth flavor as well. This stuff will kick you in the pants.

Hailing from Amsterdam, this legendary strain tastes amazing and gets you pretty stoned. It’s almost like you’re on a rollercoaster of effects. One moment you’re uplifted, the next you’re out on the couch.
If you’re looking for creative inspiration, White Widow will be your best bud. Just make sure to take advantage of all the creative energy before you get overly relaxed.

a classic since forever!

We’ve been smoking White Widow since the ninetees! Love this strain and still grow it sometimes. Guaranteed quality!