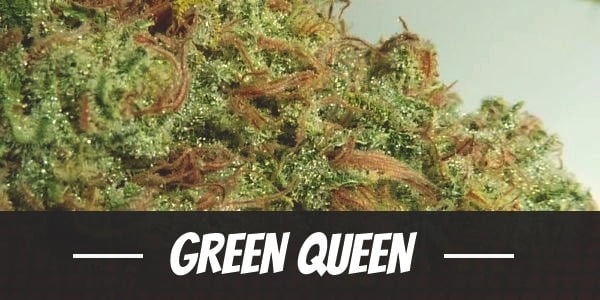 It no longer comes as a surprise if there are some strains in the market with a somewhat shady history. However, the frustration is always there for many reasons.

For one, there is always a little danger in not knowing enough about something that we ingest no matter what that might be. At the same time, with a limited knowledge about a particular variety of strain, it also limits the things that breeders and growers can do with it.

However, the world of cannabis has never discouraged smoking weed just for the lack of information about any of its varieties. That being said, here is one particular strain that the entire cannabis community knows very little about, yet still ends up in the majority of user’s menu of joints.

The Green Queen is the result of crossing Green Crack and Space Queen. Rumor has it that the primary breeder of the strain was JB Dank Nugs, but not everyone in the cannabis community would agree on that.

Although there was no mention of any other specific breeder, some sources would suggest that the strain was originally from Oregon.

Nonetheless, it cannot be argued among cannabis users that the Green Queen strain is a true reflection of its parents’ best qualities.

Green Queen may be considered as a moderately potent strain, but it sure does not disappoint its users. With THC levels that can reach as high as 19%, the strain is powerful enough to bring users into a euphoric state like never before.

Just like any variety of strain with even the slightest Sativa content in them, the Green Queen also offers some notable cerebral effects at the onset. Although, it does not surprise users with a sudden head high. Instead, the effect is more of a creeping and mellow sensation.

This slow yet apparent cerebral effect manifests itself as the user feels an overall elevation of mood that may be accompanied by an irresistible creative energy.

Now, considering the 70% Indica content of Green Queen, its physical effects are not to be underestimated. As users bask in the feeling of heightened energy, a numbing body high soon takes over. It is important to note that users may have different levels of tolerance to the strain’s physical high.

For some, the body buzz is evidently relaxing, yet not too overpowering. Instead, it is more of a stabilizer for the strong Sativa effects. Other users, however, would describe its physical high as sedative-like which can often lead to couch lock.

The hybrid effects of Green Queen are undeniably delightful. However, considering the dominance of its Indica content, it should ideally be used in the evening for users to fully take advantage of its relaxing body high.

The aroma of the Queen Green is one of its most notable qualities. Everybody in the cannabis community knows that a strain with such strong and distinct odor is a good sign.

To be more specific, the strain boasts of an earthy, pungent and herbal scent with woody and nutty undertones. Other users, however, think that its odor is more skunky than earthy, but has a subtle sweetness to it with hints of citrus and pepper.

A few users, on the other hand, have a more interesting take on how the strain smells like. According to them, its aroma is a reminiscent fresh onion soup, garlic bread, and beef stew.

Naturally, the flavor of Green Queen is equally pleasing as its aroma. Its flavor is a delightful mixture of sweet and spicy pine with a nutty undertone that may be accompanied by the sweetness of berry.

Apparently, the combination of its delicious taste and interesting hybrid effects is said to make users crave for it even after the first puff.

Unfortunately, any cannabis variety can potentially bring out some adverse reactions especially to users with very low tolerance.

In the case of Green Queen, the most frequently experienced adverse reactions of users are dry mouth and dry eyes. While the strain is less likely to cause anxiety, it does not go without saying that a higher dosage may not have the possibility of triggering such condition.

The same is true for those users with low tolerance to the Sativa effects of Green Queen. These users will possibly experience dizziness and headache as a reaction to the strong head high of the strain.

Although smoking marijuana is oftentimes regarded as a recreational activity more than anything else, users are well aware of the fact that there is more to these plants than what most people think.

Cannabis has long been proven to have some medicinal value. In fact, the Green Queen strain has its own fair share of medical benefits.

To wit, the strain’s cerebral effects help patients suffering from depression and stress improve their overall mental state through its uplifting head high. Surprisingly, while the strain may cause anxiety, it can also help address the same condition given that the user uses only a moderate amount.

Some reports also claim that the strain can be a great help to people suffering from Bipolar Disorder, ADHD, PTSD and even simple mood swings.

The numbing effect of Green Queen is especially helpful in relieving pain that is caused by various health conditions. It’s relaxing physical high, however, is more like a potent sleeping pill for the insomniacs.

When a strain has an unknown or shady origin, it becomes almost impossible to determine how the plant can be cultivated because that particular information is also limited or unavailable.

In the case of Green Queen, there is no definite and verified information as to how the strain can be properly cultivated.

Suzy Q is developed by the Burning Bush Nurseries with the help of Project CBD. Read our full review!

However, growers can always refer to its parent strains to make a few educated assumptions.

Both Green Crack and Space Queen can be grown either indoor or outdoor. Their outdoor cultivation requires a warm or Mediterranean climate, so it can be assumed that Green Queen can also thrive in under such environment.

Yet again, there is no known information as to the flowering time of Green Queen. However, its parent strains can take up to 9 weeks at most before the buds are ready for harvest. Both can produce medium to high yield which can be around 16-20 ounces per square meter.

The information above may be used as a baseline data for anyone who wishes to grow Green Queen indoors.

In the same manner, growers may also need to refer to Green Queen’s parent strains for its outdoor cultivation.

Judging by the average outdoor flowering time of Green Crack and Space Queen, Green Queen may also be ready for harvest around late September to early October and produce a moderate to high yield.

Have you ever smoked or grown your own Green Queen? Please let me know what you think about this marijuana strain in the comments below.